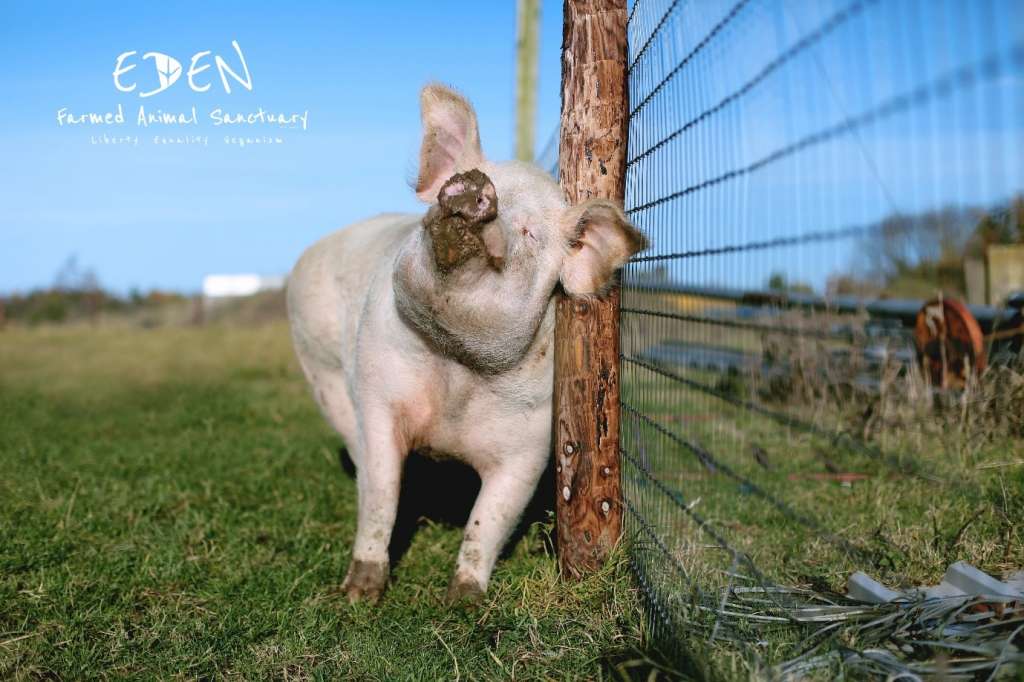 Nancy arrived at Eden in the Autumn of 2018. She had been used as a backyard breeding sow and was destined for slaughter.

2018 has been a very successful year for us at Eden. 165 residents now live at Eden, including several who were rescued from human use and slaughter and came to live with us in the last twelve months.

We think there are few places on earth with as peaceful and beautiful an atmosphere as Eden. As soon as we go through the gates of the sanctuary, we sense tranquillity. This is present regardless of the time of day, and regardless of whether the residents are busy and active or resting. This sense of the beautiful environment the residents have created in their home reminds us to be humble about our work in service to them. 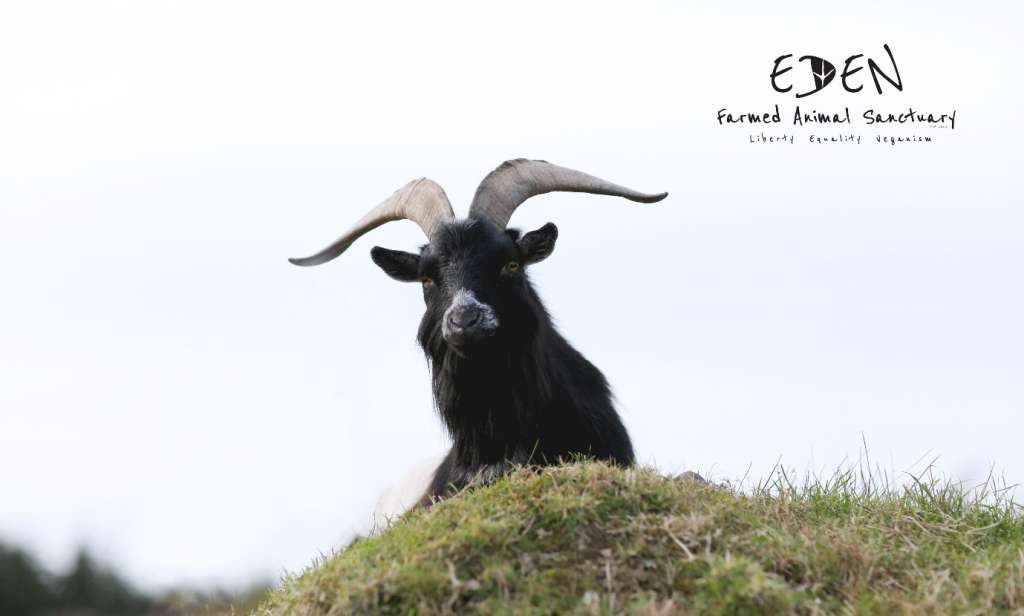 Gabriel, rescued from torture at the hands of children.

We rescue them and we provide the scaffolding required for their healing in the form of consistently caring for their basic needs and interacting with them respectfully. But we are not responsible for their healing. They heal themselves and they create this beautiful home through their presence and their interaction with each other and the landscape in which they live. The fact that so many of them arrived at Eden completely broken, physically and psychologically, bears testament to the courage it must take to return to normal life having come from a history of being farmed and owned for human use. 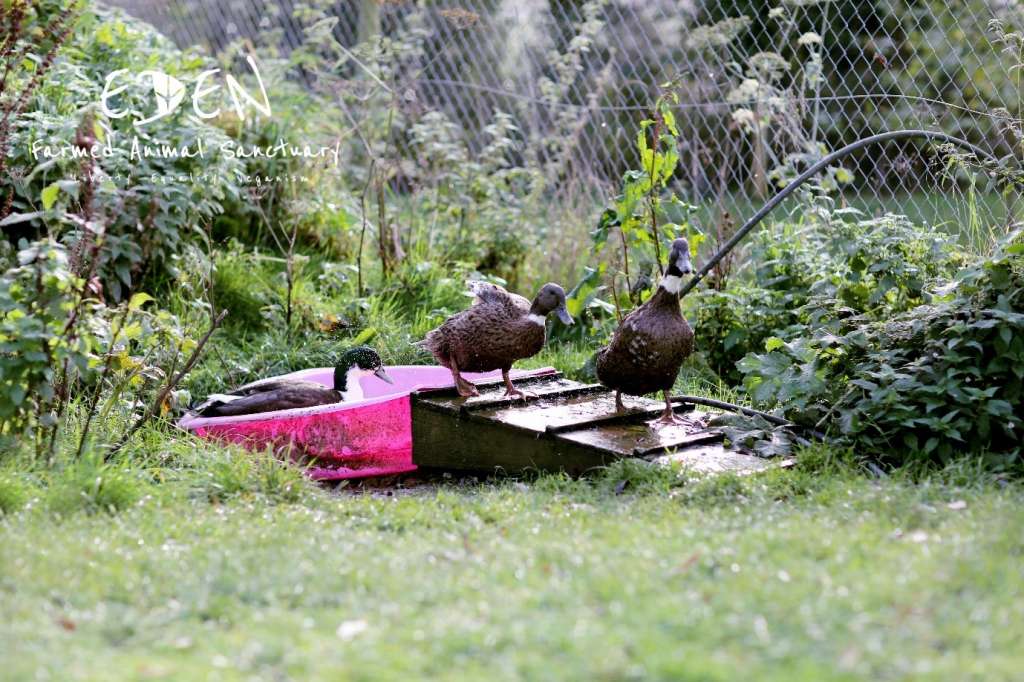 The opportunity to live at a vegan sanctuary makes the world of difference to the fortunate few who make their home here. The specialised care we provide for them goes a long way towards overcoming the effects of selective breeding, although we can never eradicate the effects fully. Every hen rescued from the egg industry is treated with hormone implants to prevent them laying eggs. Although this treatment is very expensive, we have found it to be highly effective in preventing the common causes of suffering and death that occur because hens are selectively bred to over-ovulate such as prolapse, infection and ovarian cancer. The hens at Eden have a vastly extended lifespan as a result of this treatment. The change in Missy in one year since she was rescued from the Irish free-range egg industry is remarkable. 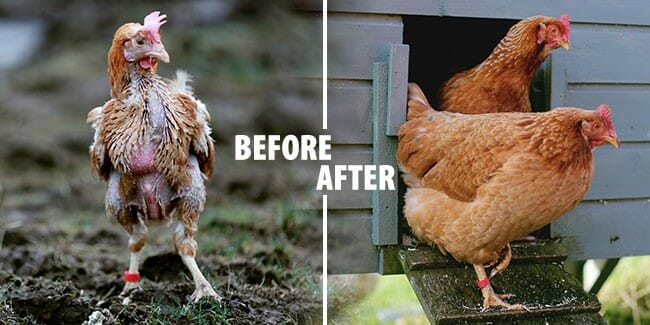 We might have rescued them from the exploitation of farming, but they rescue us from our ignorance. Even though we have been running Eden for almost eleven years, we are still learning about the complexity and sentience of non-human life, and, sadly, we continue to learn about the devastating effects that humans have on other lives.

Each one of the billions we ‘farm’ to kill every year, is as unique and feeling a being as you or I. The items that we take for granted such as the food we eat, the clothes we wear and the cosmetics and other products we use, have a history that stretches all the way back to a unique individual being: someone with feelings, someone’s mother, someone’s child, someone who valued their life, someone who didn’t want to be used, or harmed, and didn’t want to die. Someone, who if we met them face to face, we would never choose to harm.

Harming someone defenceless and innocent is anathema to most of us. It goes against all the values that we claim to uphold such as justice and fairness.

It is these ‘someones’, the victims of our human use, who are rescued and live at Eden. 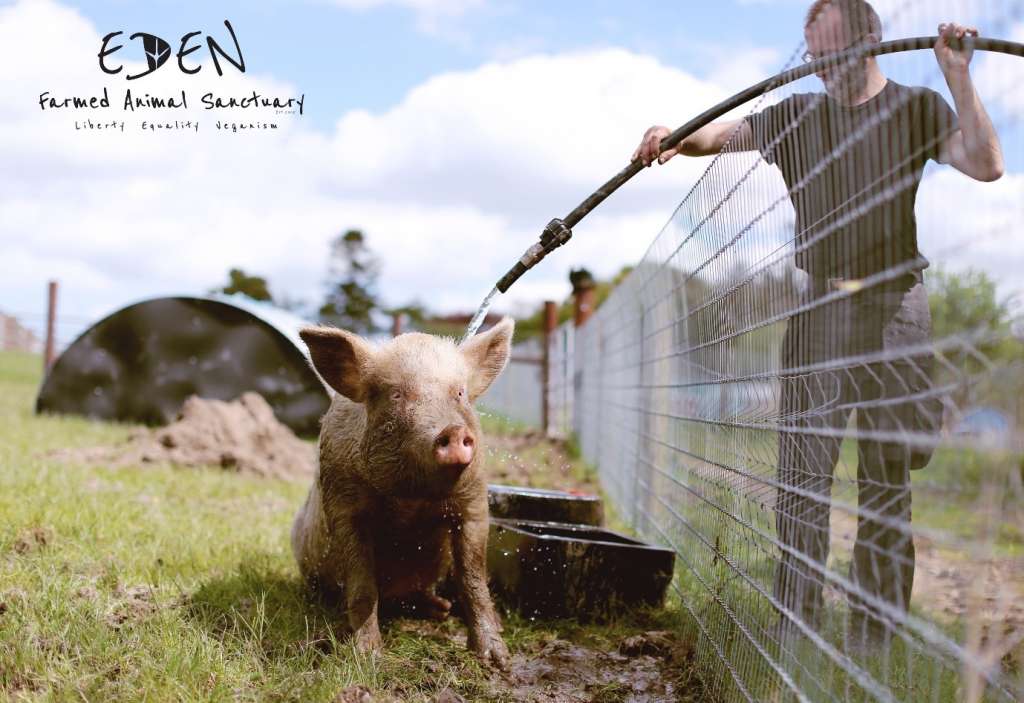 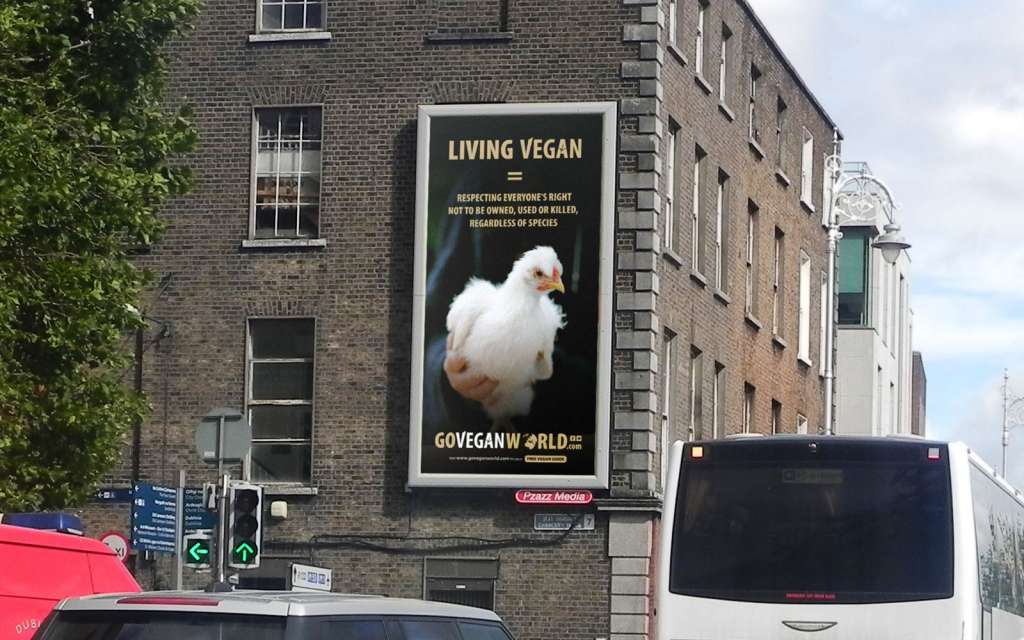 2018 has also been a very successful year for Go Vegan World, the public education campaign that is inspired and informed by Eden’s residents  who feature in most of the ads. Go Vegan World used the year to display thousands of ads throughout Ireland, the UK as well as internationally. 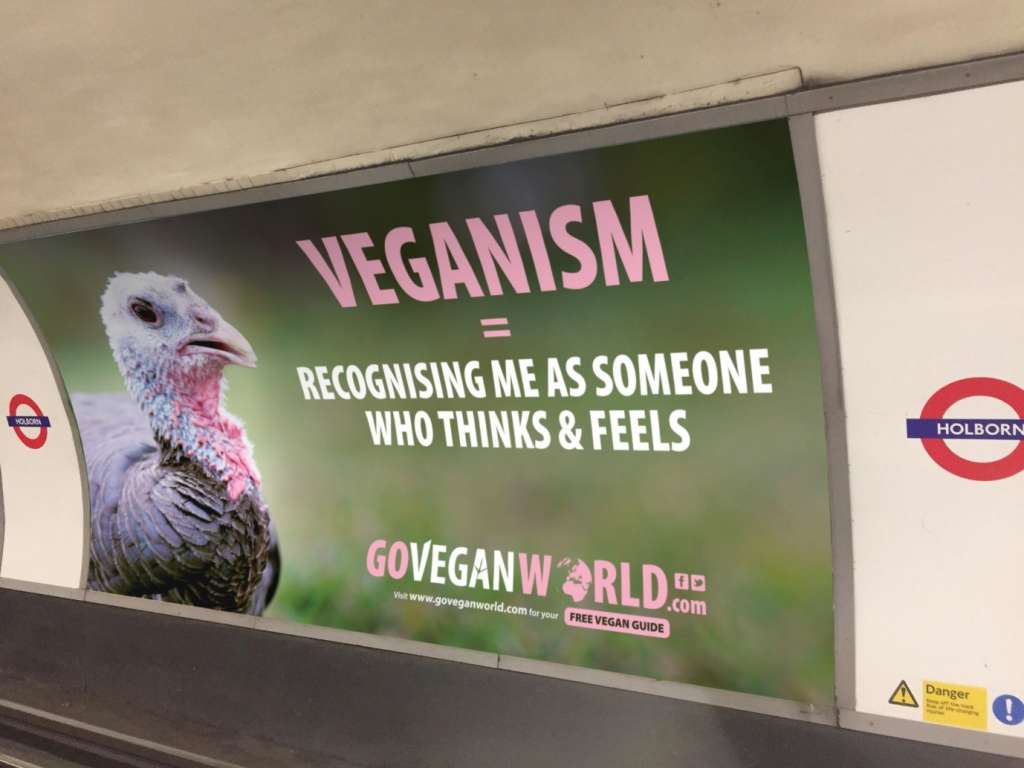 The ads educate the public about the animals we use, prompting them to research the issues for themselves and supporting them to go vegan through the offer of our free vegan guide. 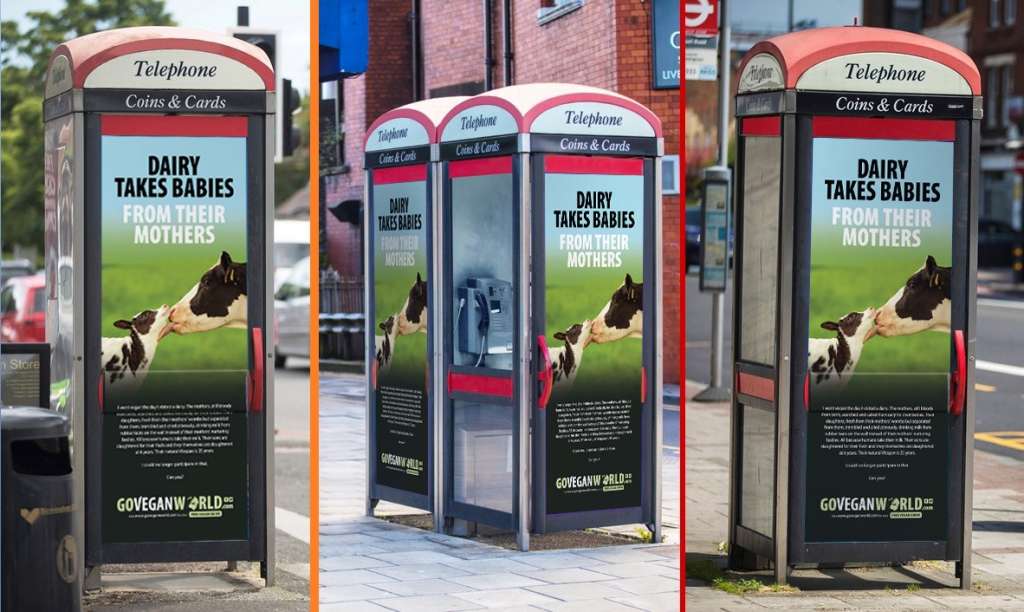 As we enter 2019, Go Vegan World has more than two thousand ads showing on buses, billboards, the London Underground and streets across the UK and Ireland including the first large screen vegan video ads in Ireland. 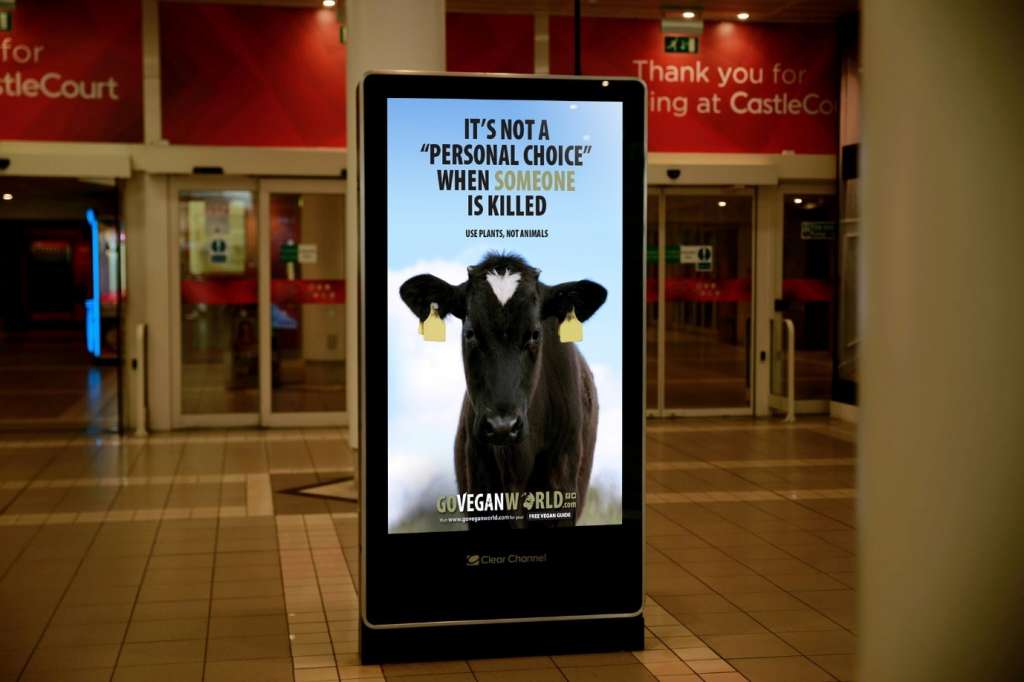 Go Vegan World is renowned for its fact-based advocacy and attracts a lot of public attention both from members of the public as they become aware of how other animals end up as food, clothing and even in our cosmetics and cleaning products, as well as attention from the industries that profit from using other animals. Unsurprisingly, those industries have complained about the ads in an effort to silence and stymie its efforts. 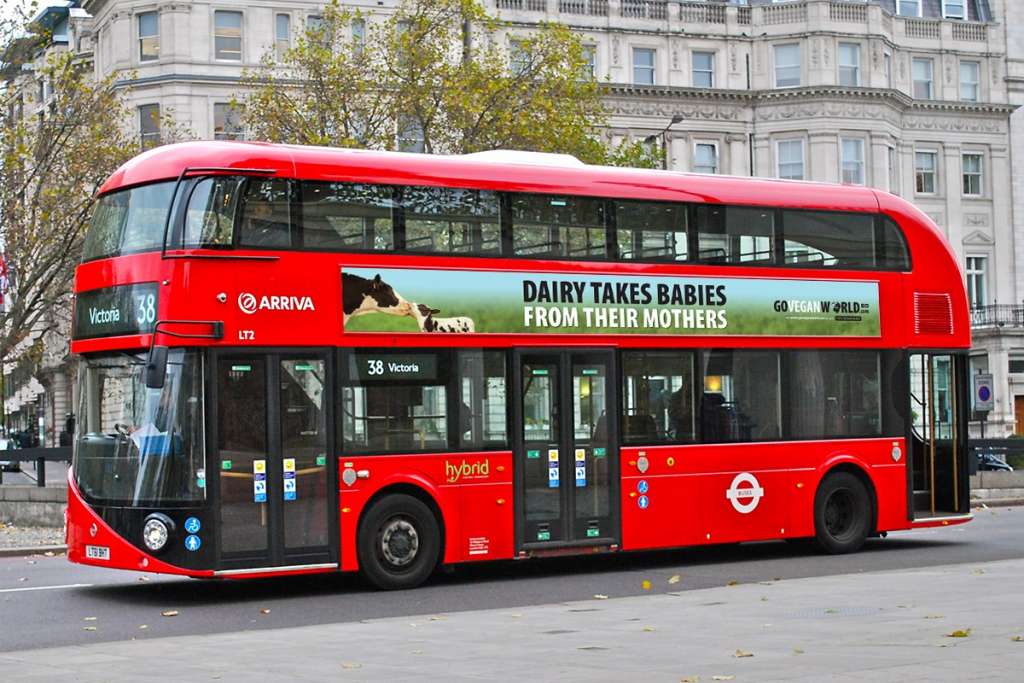 The Advert and Complaint

The ASA decision followed a complaint about a Go Vegan World public information advertisement on a UK bus featuring a mouse holding onto a human hand, accompanied by the text “They Trust Us, We Torture Them for Research”. 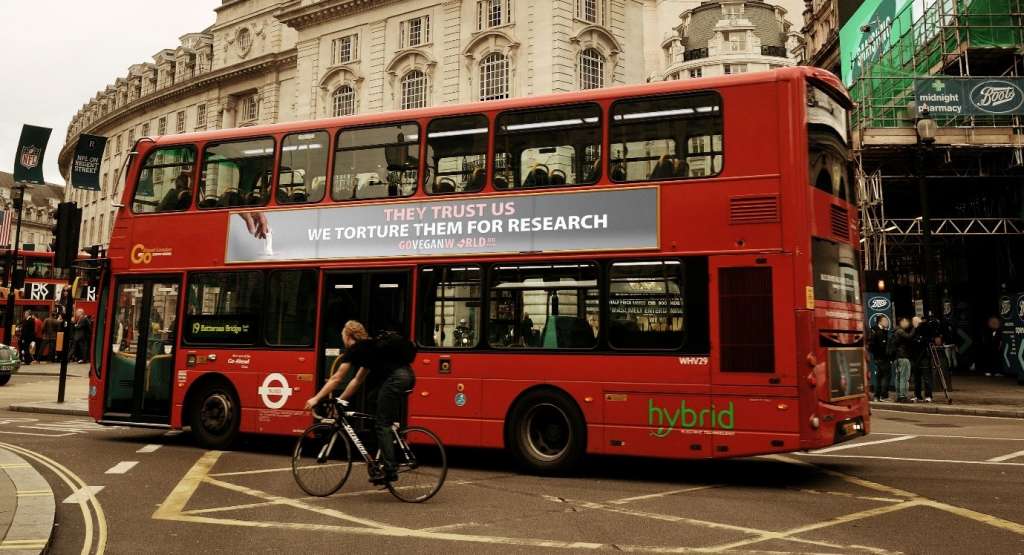 A medical scientist asserted that it was misleading to say that we torture animals for research, because “scientific” research is regulated in the UK. However, Go Vegan World provided the ASA with evidence of the torture of millions of animals by the research in the UK every year, even according to official statistics and legislative definitions.

The ASA agreed with Go Vegan World that there was sufficient evidence to support their use of the word “torture”.

“Animal experimentation is the stuff of nightmares. We should not support it, any more than we should support killing other animals for food or any other use.

Research shows that most people disagree with frivolous experiments that cause harm, but they imagine that the torture of a non-human is justified when it benefits the life of a human. Many believe that experiments conducted on animals in the UK are necessary to address life-threatening human conditions; that is not the case. In fact, most experiments are unreliable because the results are not applicable to humans. Many of them are conducted for frivolous reasons and lack scientific validity. A 2017 analysis by the British Medical Journal cited a “systematic failure” to faithfully report the results of animal tests in order to secure funding and permission for human trials. Even in cases where there is a benefit to humans, we are morally obliged to find alternatives that do not involve using other animals.”

“This independent, legal finding substantiating our ad, is hugely significant for animals used in laboratories and for the rights of all animals used as objects for human ends. Most people are against torturing animals. If we are opposed to torture, we should refuse to support it. If we buy products that have been tested on other sentient animals or that contain “ingredients” taken from their bodies, we are paying others to use and kill them for us. That is the case for cosmetics and household products, but it is also the case for food, clothing, entertainment and all the other ways in which we use them as objects.

The full ruling can be read here.

The work of Eden and Go Vegan World is to rapidly and completely abolish the human use of other animals and to challenge the myth of human supremacy and the legal status of other animals as the property of humans.

“It is worth remembering that every non-vegan product and practice we purchase involves an individual who was bred to be used and then killed. To the animal who had one life and whose only life has been taken from them, they have lost everything. Despite the attractive production and packaging by which the bodies of other animals arrive onto our plates and into our homes and lives, they are part of legalised institutionalised killing.

We depend on your generosity to run Eden as a home to its residents and to continue to educate the public through Go Vegan World. Please consider making a donation to us to ensure that 2019 is another progressive year for the rights of others.