The Role of Vegan Sanctuaries

One of the most difficult tasks faced by sanctuaries is having to say no to requests for a place to an animal who needs it. Sanctuaries are expensive to run; they require land, appropriate animal shelter, food, and veterinary care at the very minimum. All sanctuaries have limited resources in terms of funding, space, and staff. However well meaning, volunteers are usually unable to commit to the level of care that sanctuary animals need. At Eden we make a promise to every animal, as they arrive, that we will endeavour to care for them to the very best of our ability, so that their life is worth living until the day they die. We have an obligation to those already in our care to ensure that their home remains a sanctuary, with sufficient resources to meet their needs. If we take in more animals than we can adequately cater for, we will struggle to care for the newcomers and the animals who already live here. This is true from the smallest animal to the largest. Chickens may be small but they are territorial; they need sufficient space to thrive; and their needs are great due to the deleterious effects of selective breeding on their health. Some of our highest veterinary costs are for the illnesses they develop secondary to being bred to over ovulate in the egg industry and produce large quantities of flesh in the ‘chicken’ industry. The same is true of larger animals, particularly pigs and cows who require extensive areas of land for grazing and rooting, and need to be moved frequently from field to field. 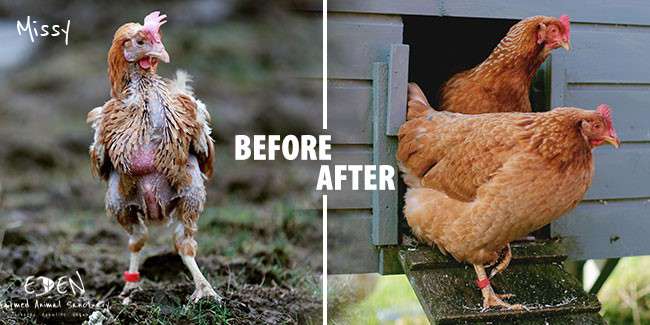 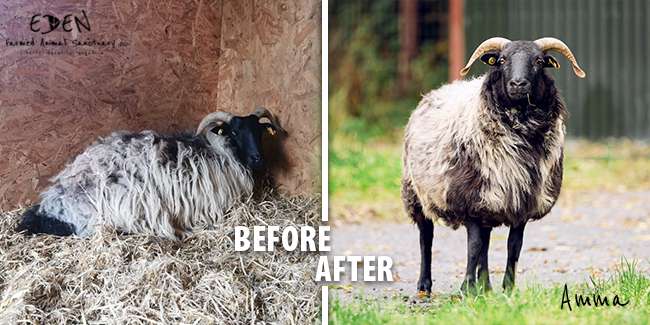 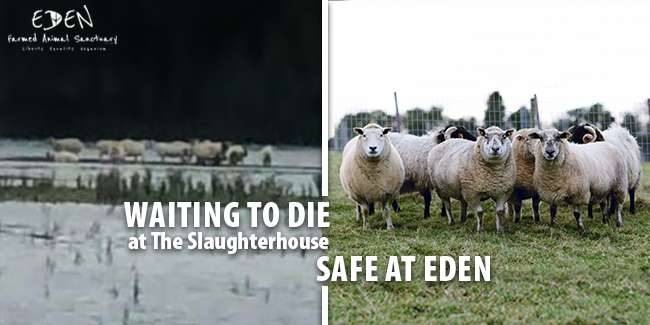 An efficiently run vegan sanctuary is invaluable to the animals rescued from human exploitation, who face death by slaughter. But it is impossible for sanctuaries to mop up the mess of animal agriculture, never mind give a home to even a fraction of the animals we exploit. The latest statistics, at the time of writing, indicate that there are almost seven million (6,649,300) cows in Ireland[i]. Between them, sheep and pigs account for almost six million more individuals (1713,600 pigs and 3,991,200 sheep)[ii]. The human population of Ireland is just over five million. While we can never underestimate the significance of rescue, we cannot expect more of sanctuaries than they are able to give. To do so risks less than desirable living conditions for the animals and burnout for those trying to care for them. We need to be particularly sensitive to the emotional wellbeing of animal carers who do not refuse a home at their sanctuaries lightly and who frequently experience tremendous worry about the fate of those they are unable to take in. 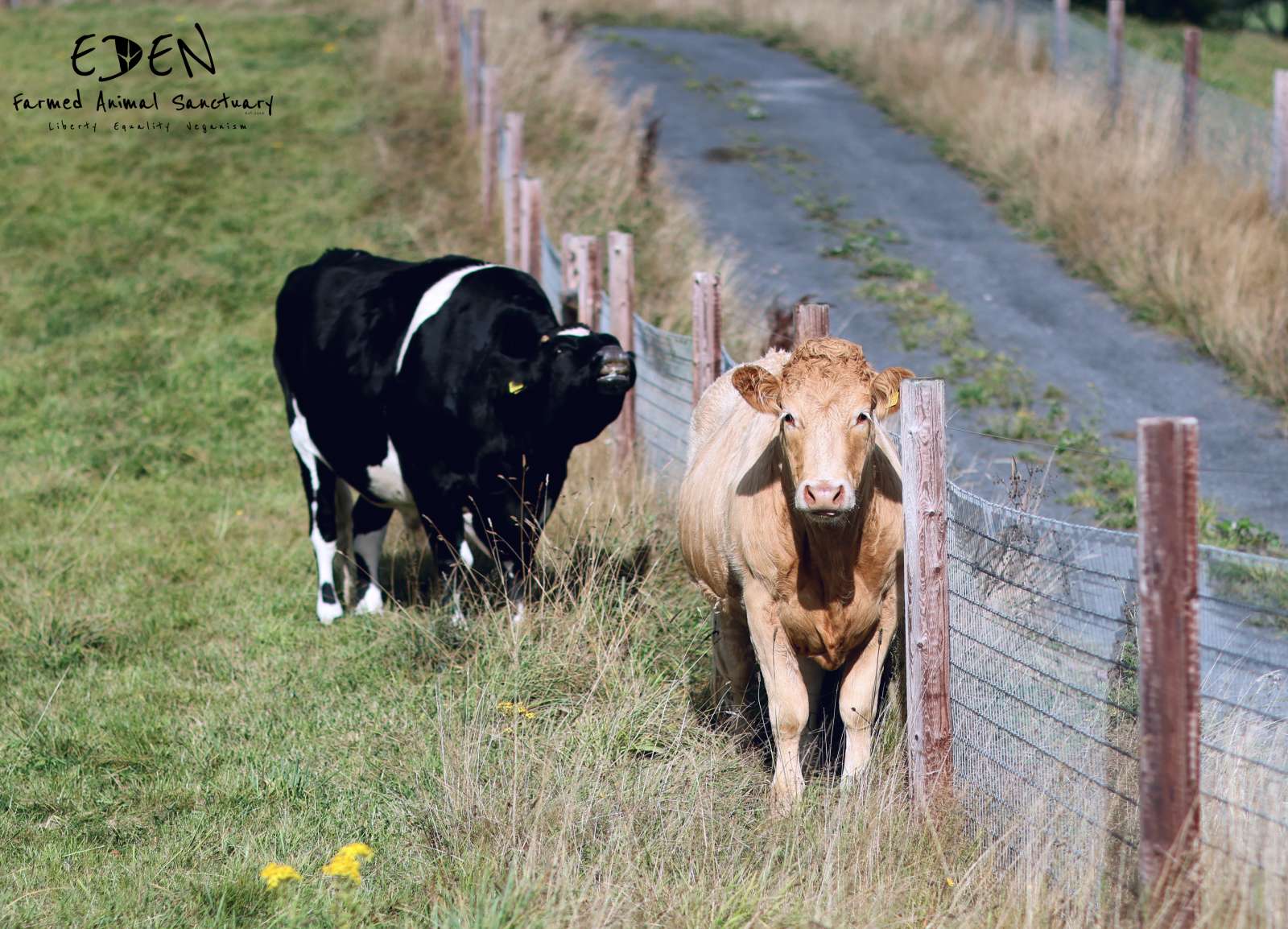 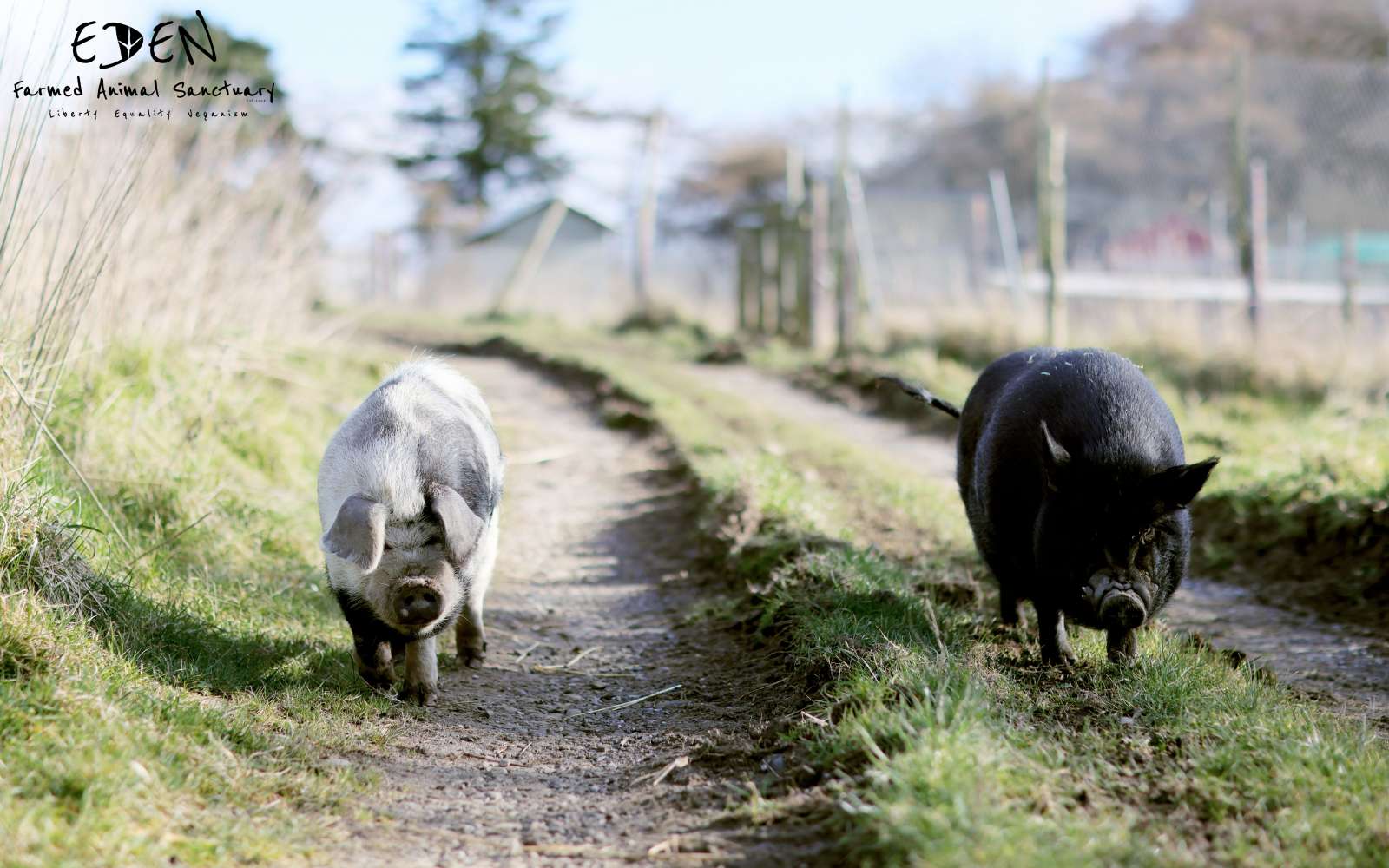 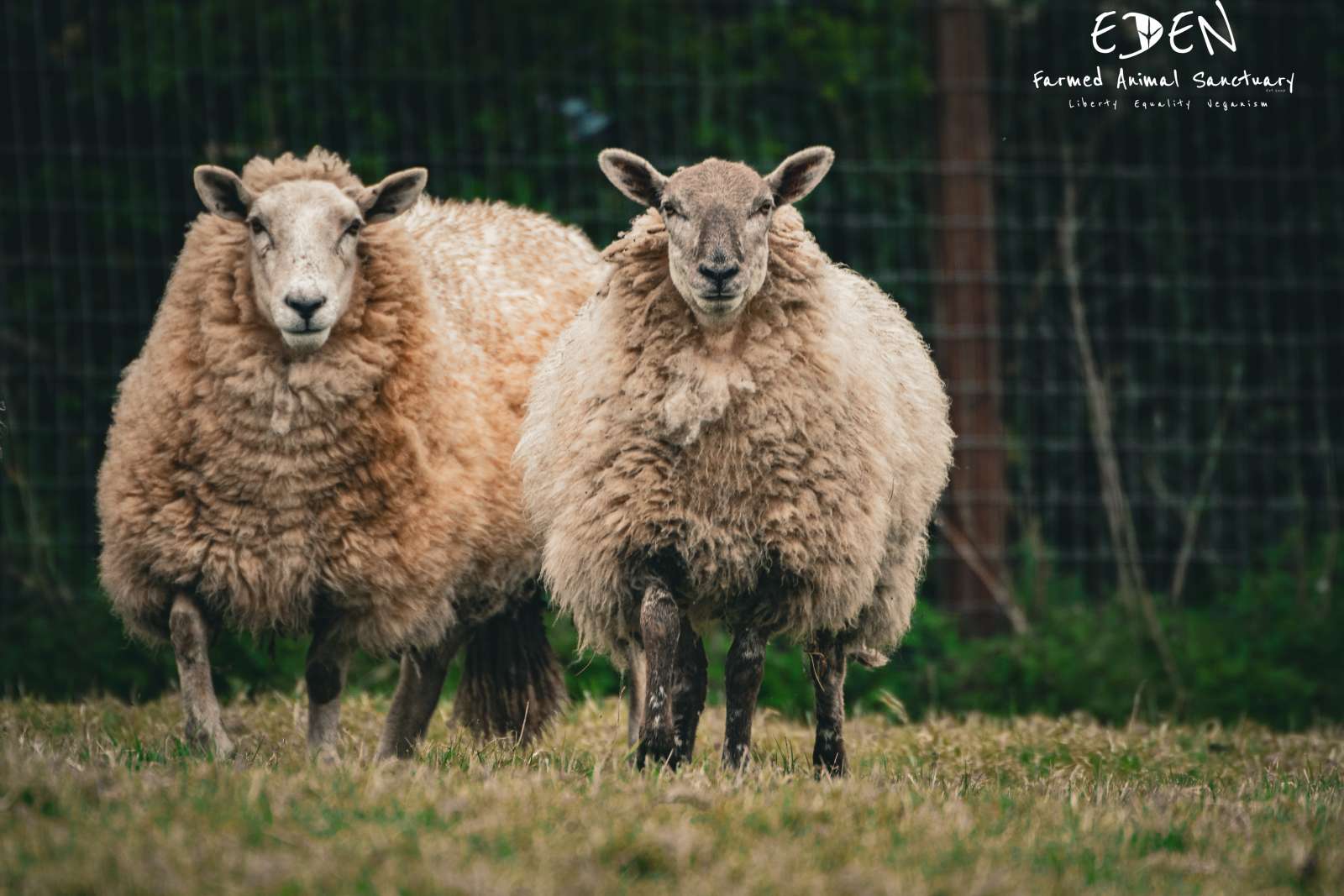 At Eden we have never refused a place for an animal at our sanctuary if we were in a position to take them in. That is not to say that we have never refused a place to someone in need. Unfortunately, we have to refuse frequently because we have 230 animals in our care already and we cannot stretch our resources beyond their capacity. Despite the pain that sanctuaries experience when they have reached their capacity and are forced to refuse to take in any more animals, the alternative is worse: an overcrowded environment with an increased risk of disease and injury; competition and bullying among the animals who have less space and fewer resources; more animals than their human carers can cope with; a reduced ability to prevent disease and detect its presence in the early stages; a lack of appropriate veterinary care; and a very stressful environment for staff to work in that frequently results in burnout and a high turnover rate. 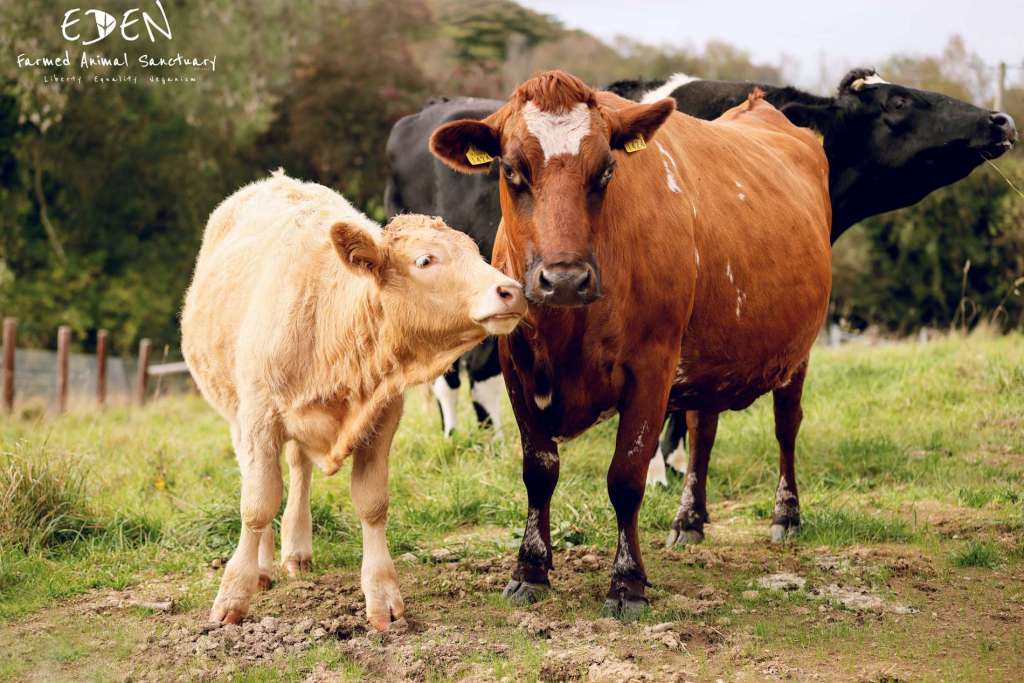 Quite a few of our requests at Eden come from farmers who have formed a bond with one or more of their animals and don’t want to slaughter them. That frequently occurs when the animal has been nursed through illness or is currently ill or disabled and has special needs. Some requests come from farmers who no longer want to farm animals because it is unethical, or from relatives of farmers who have become too old or ill to look after their animals. Rather than attempt the impossible task of giving a home to more animals than we have land for, Eden encourages farmers to keep the animals themselves with some support from us. During discussion, it frequently transpires that those asking us to take in the animals have at least as much land, shelter, and animal care skills as we do, and are in a better position to keep the animals for their lifetimes instead of exploiting them and sending them to slaughter than the sanctuaries they are looking to for help. Most, but not all, of them refuse our help, preferring to disengage from the problem. However, there are some who have accepted our support and as a result, Eden, in conjunction with Go Vegan World, has funded the rescue of over 90 cows over the last few years.

It is important to consider the role that sanctuaries play in the animal rights movement. Although they exist primarily as a home to the animals in their care, their value to inform vegan education is frequently underestimated and they are unfairly and mistakenly regarded as mere repositories that can take in every animal in need, with little or no consideration for what it takes to provide lifelong care. Sanctuaries need support to be able to function as homes for those they rescue. But they also need support to engage in vegan education of whatever style they choose. What they do not need is to be humiliated and scorned when they make difficult decisions, such as refusing to increase the number of animals in their care, in order to keep their sanctuaries functional. It is of far more benefit to other animals in the long term, to increase the number of people who stop using them by going vegan. By engaging in vegan education with the aim of abolishing all animal use by humans, the need for the existence of sanctuaries in the first place decreases.

Vegan sanctuaries respect the sentience and individuality of the animals they rescue and live with. It is this very respect for the equality and rights of other animals than enables us to continually confront our own speciesism and prompts us to provide a sanctuary home for them in the first place. Vegan sanctuaries are also best placed to educate others about the harm that results when we view the lives and bodies of others as our resources. There are few places where farmed animals are permitted to grow old. Sanctuaries witness the diseases that most animals die with, rather than from, because they are slaughtered before the symptoms become obvious. Not only is their personhood buried under the discrimination of a non-vegan world, but the harm they suffer from selective breeding is hidden by the industries that profit in a non-vegan world. Vegan sanctuaries tell the stories of the animals they rescue, shining a light on the hidden horrors of the animal exploiting industries, and facilitating the animals to bring their sentience and individuality to the fore. It is when non-vegans recognise that other animals have feelings and rights, just as we have, that they go vegan. The most powerful form of vegan education by far, is to bring the histories and biographies of rescued animals into the public eye so that they can no longer be objectified and dismissed as human resources.