Three years ago, almost to the day, this precious little person came into our lives. A victim of backyard chicken keeping, Fairy was found in a cat’s mouth. As you can see from the photos, it was amazing that she survived her injuries. She lived indoors with us and she was a pure delight. She chatted incessantly, and even with a limp in her injured leg, she wanted to explore and investigate everything. She used to cuddle into the back of my neck to sleep and I still remember the flurried movements as she found the cosiest spot where she felt safe. 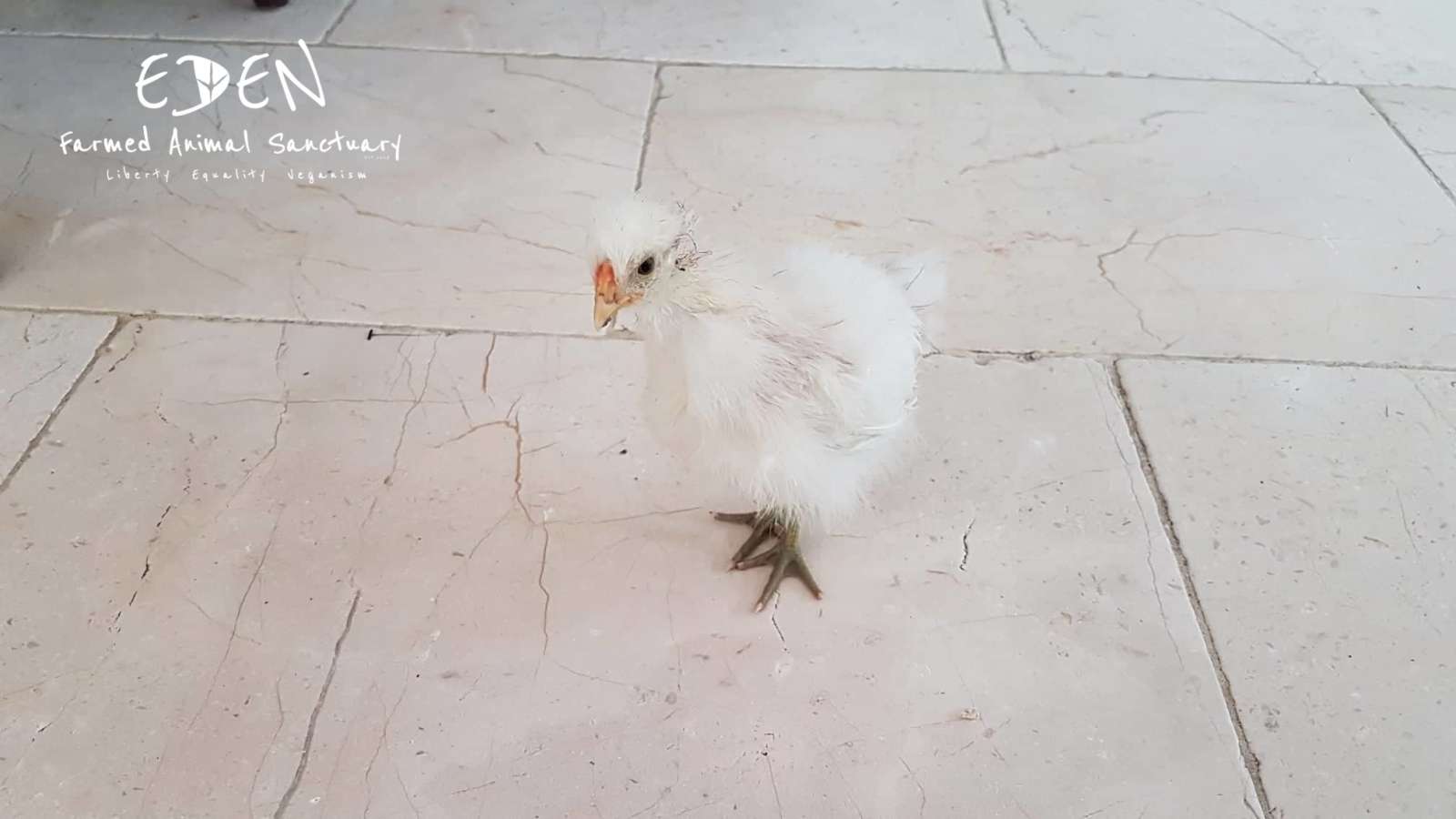 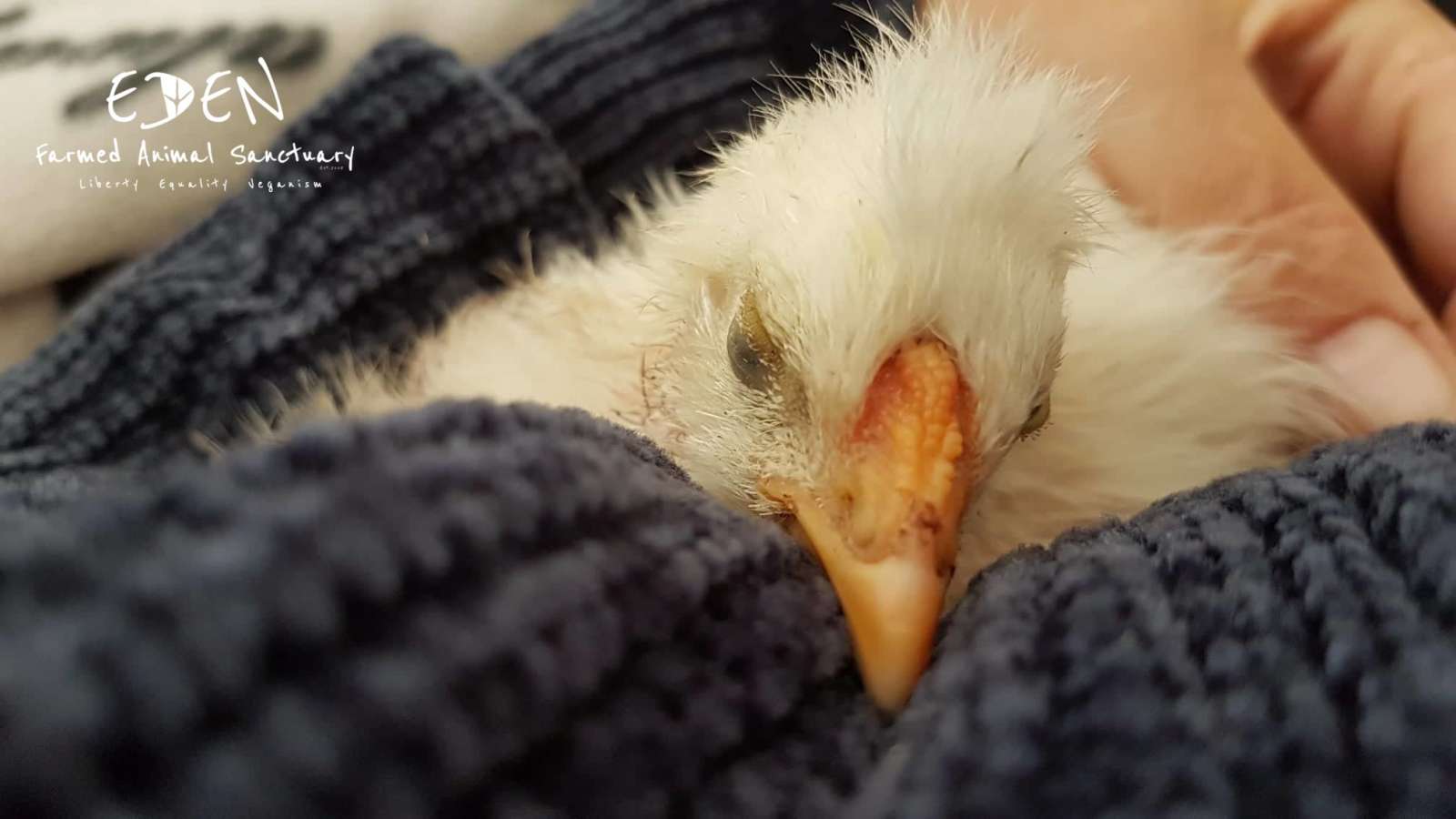 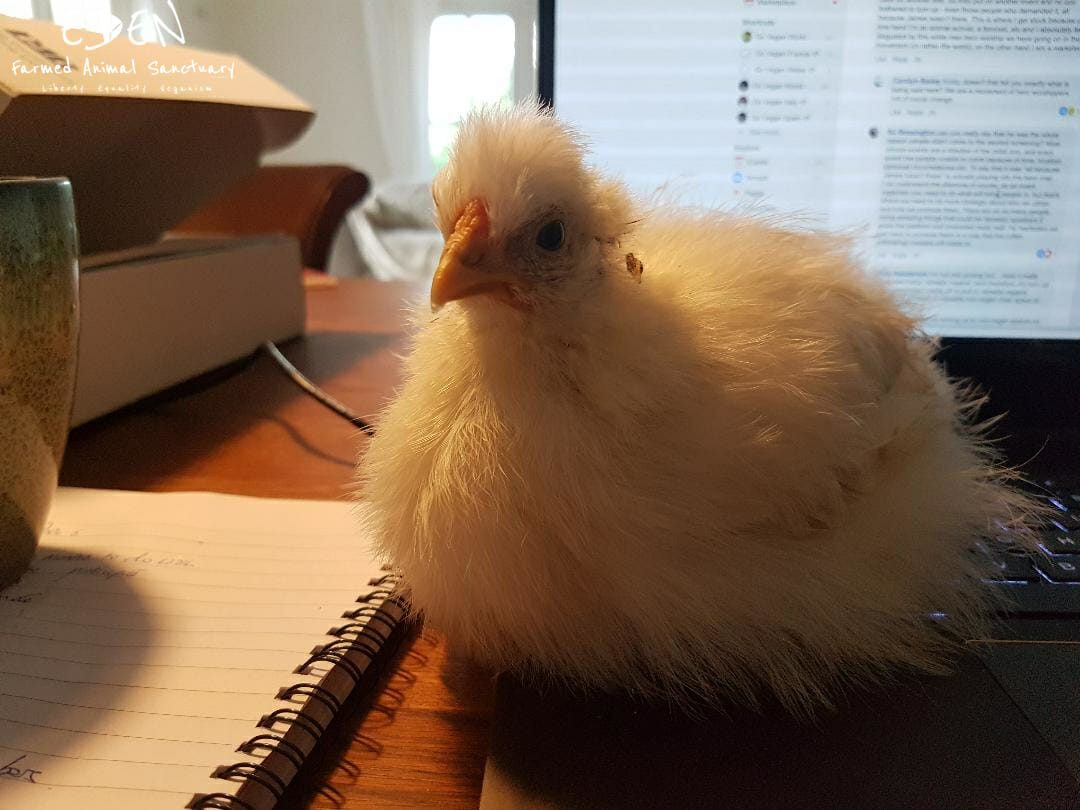 She was so endearing that I would happily have kept her as a house hen. But when we had the opportunity to rescue Blossom, it was only right that the chicks have each other for company. Since the day Blossom arrived, Fairy never left her side. 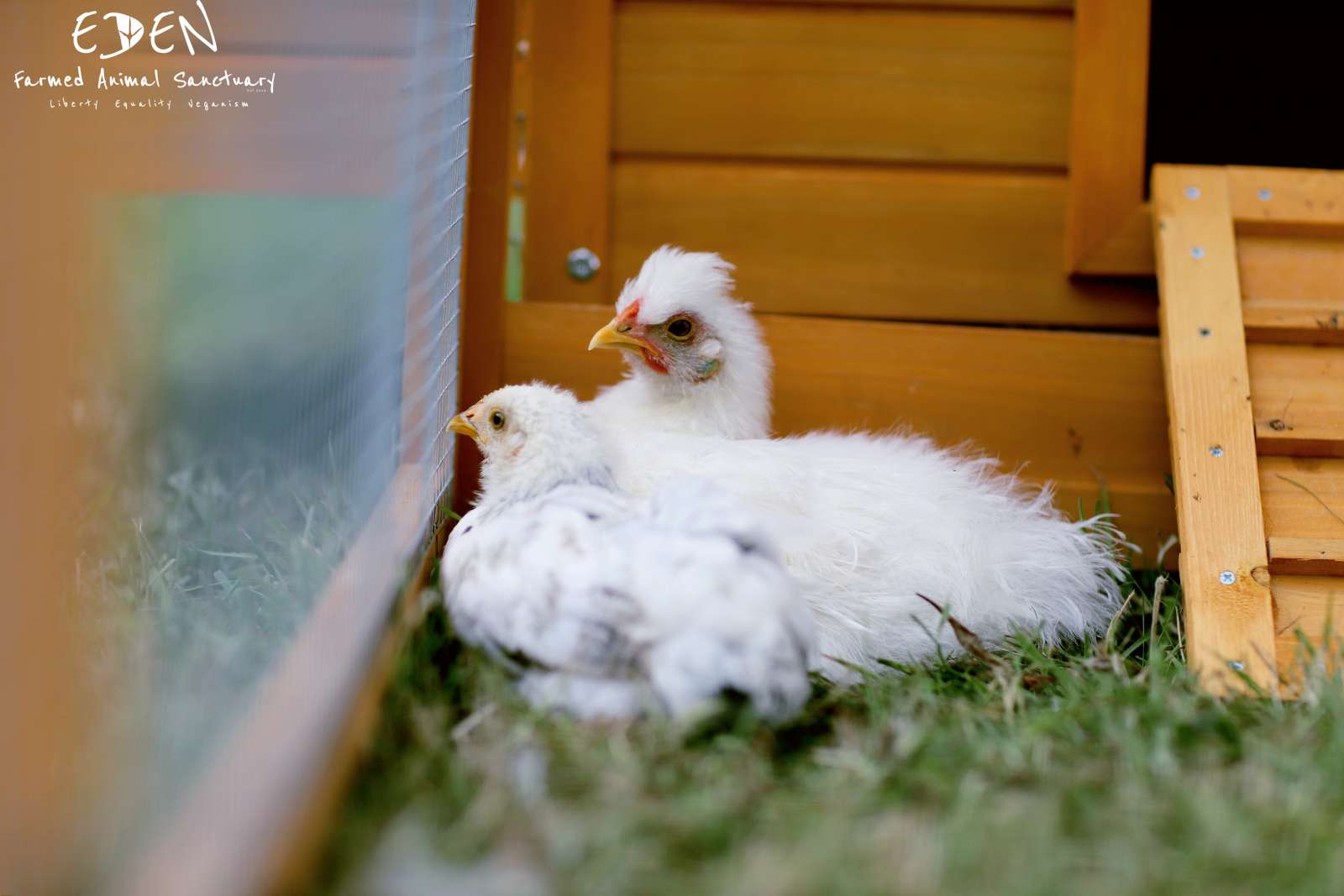 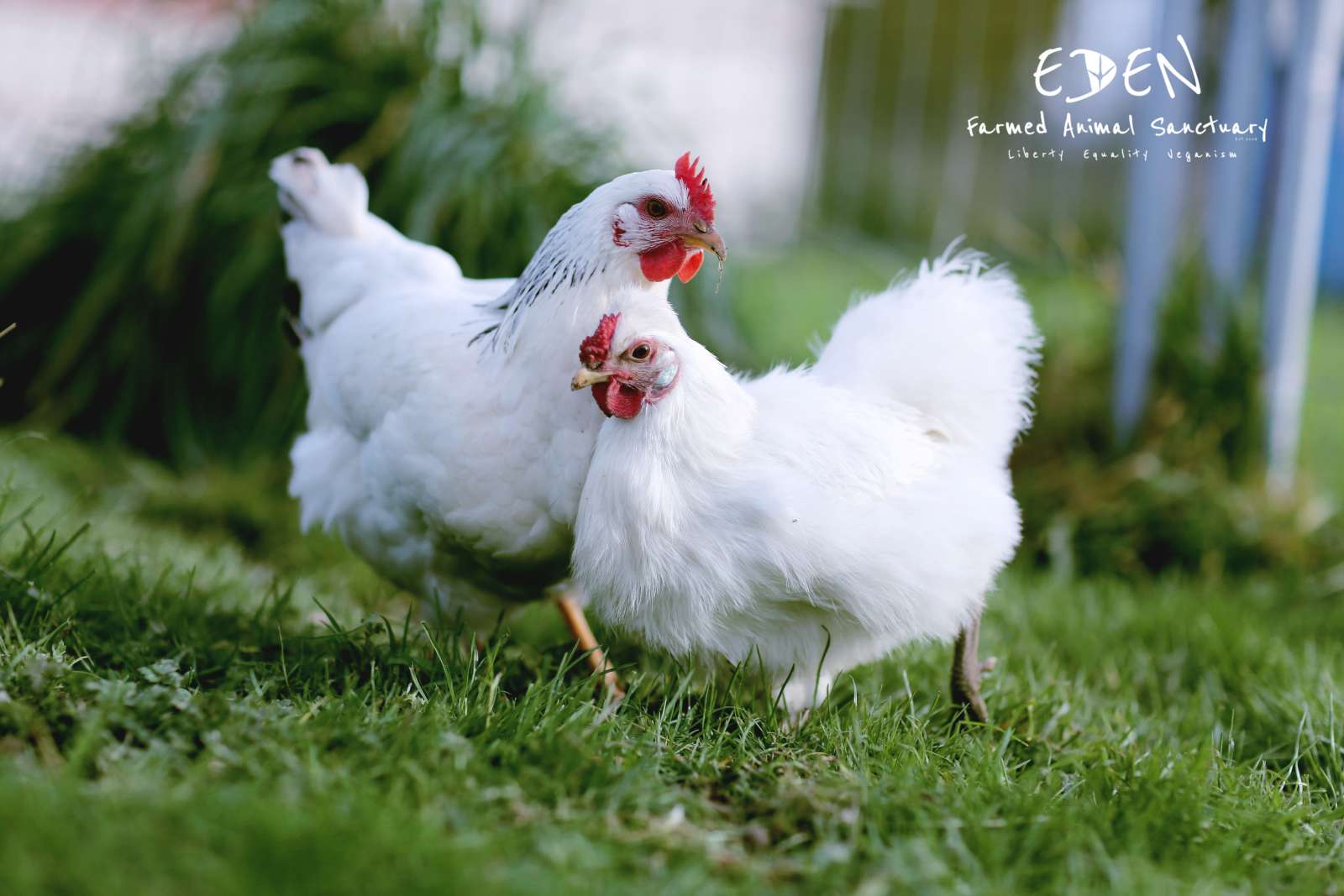 Everyone loved Fairy. When we would enter her aviary at Eden, she would come running as fast as her legs would carry her, with wings outstretched, for a hug. As Marie remembers, there was a spot under her chin that felt as if it was made for our fingers and she nuzzled into one of us every morning before hopping down and carrying on with her day. Every day was a busy day for Fairy. She had boundless energy and loved her life. 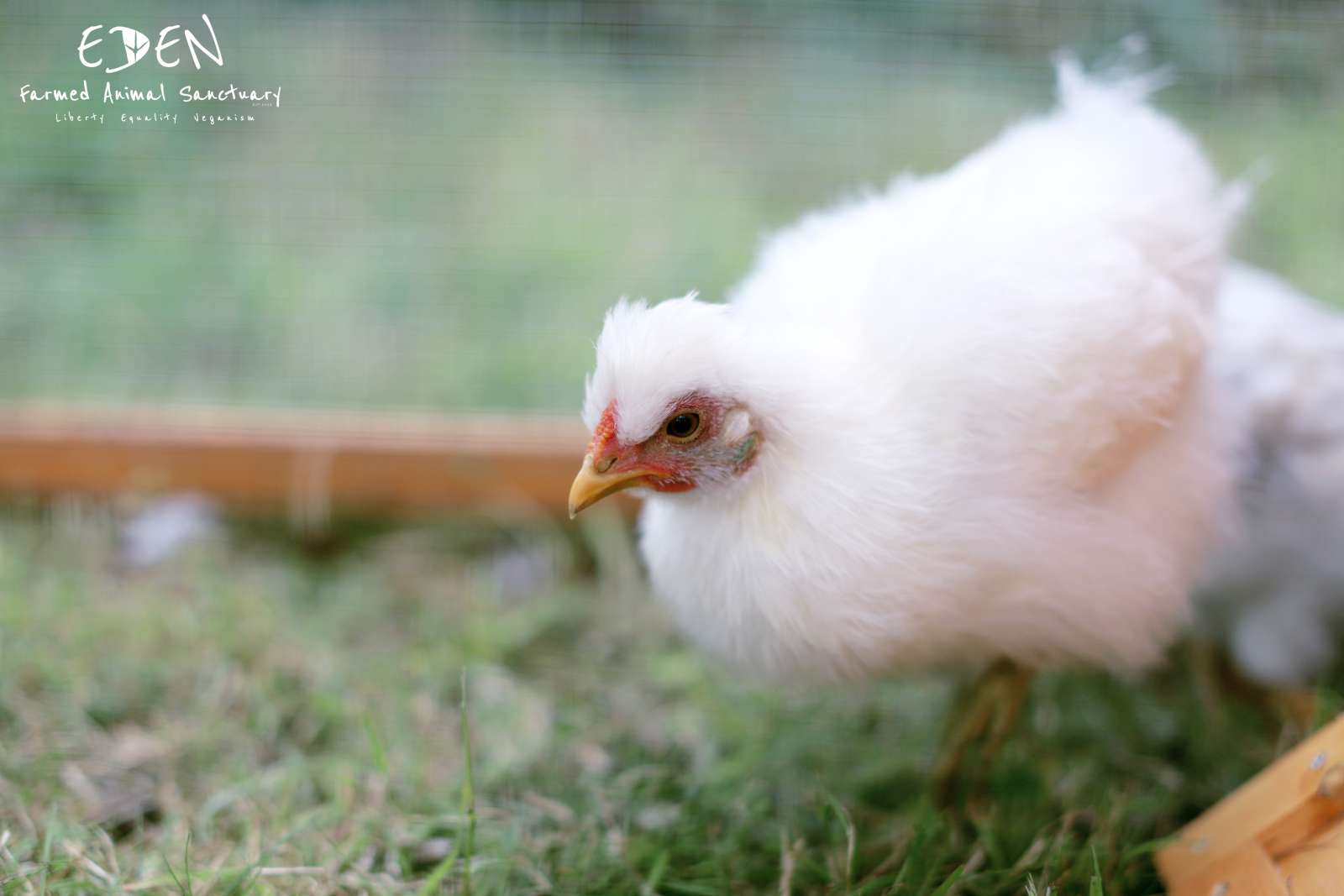 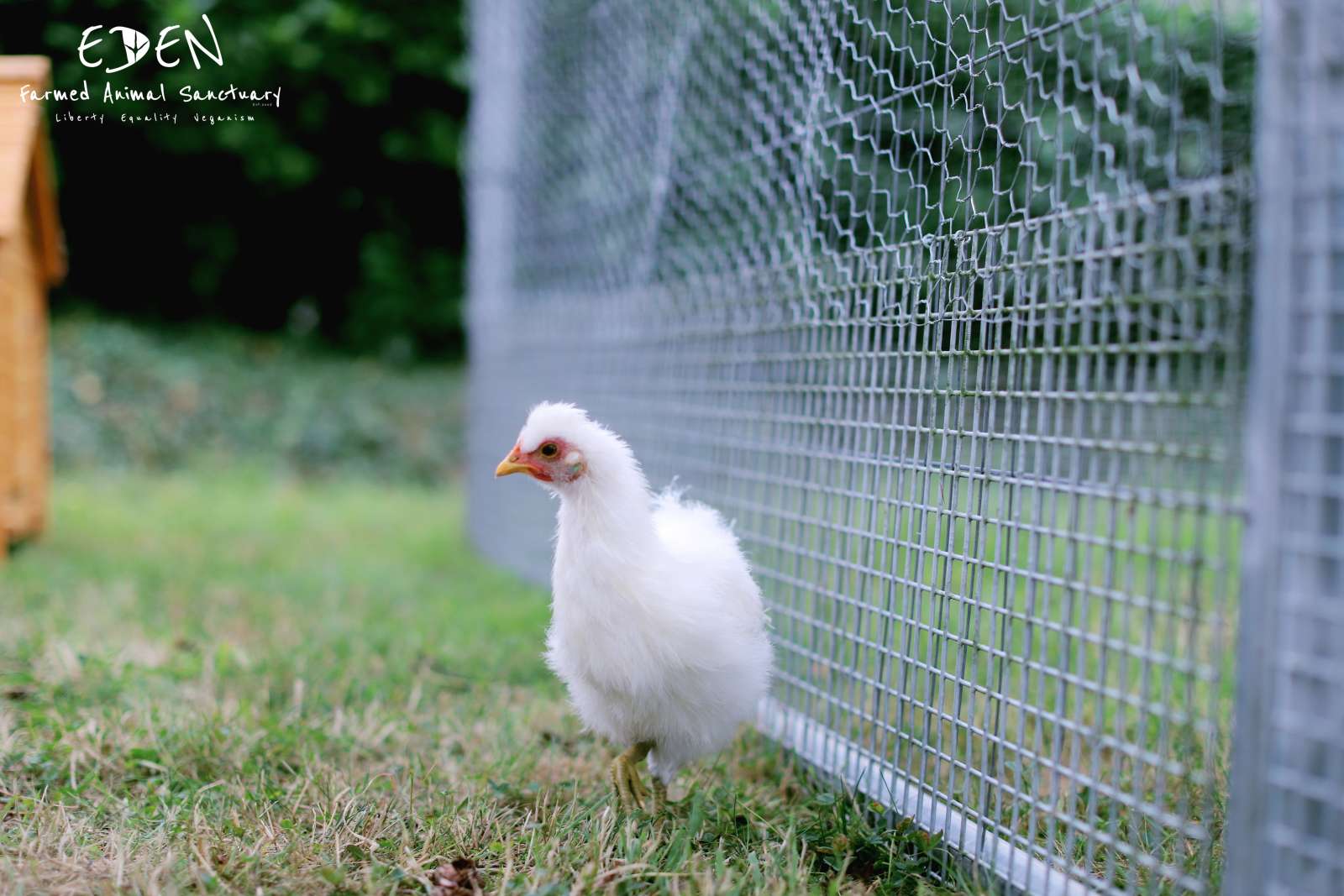 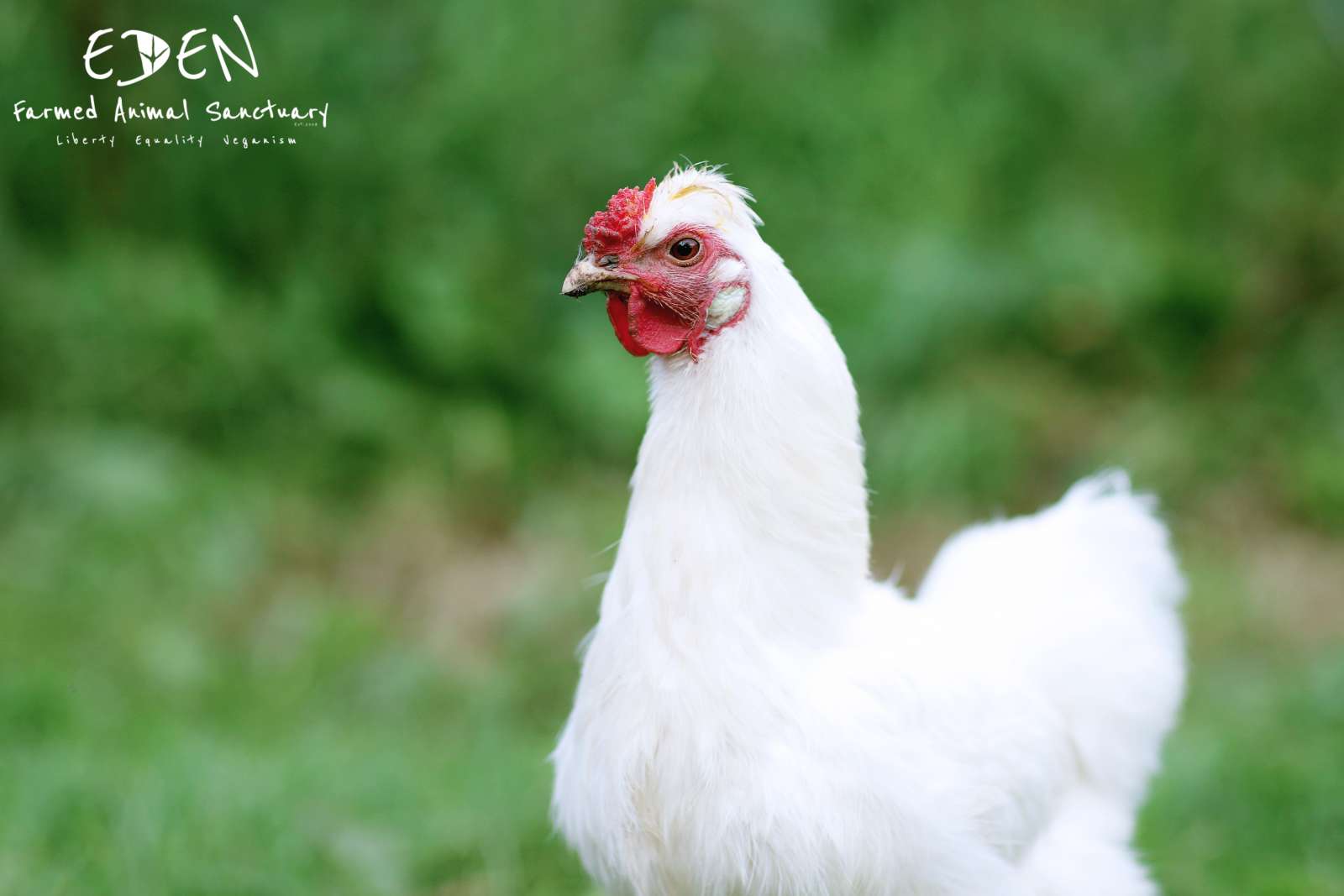 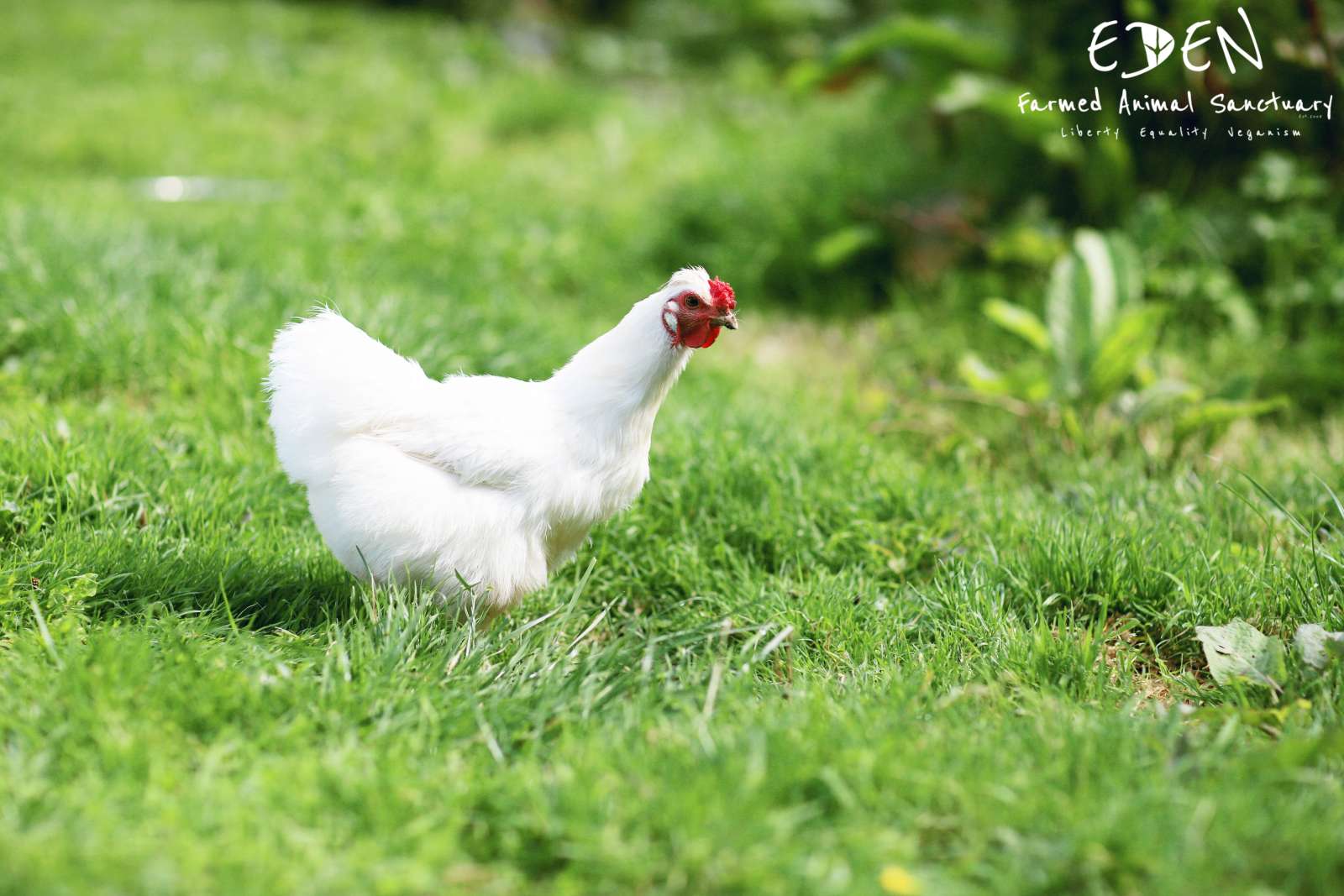 Fairy was such an inspiration to us that she featured in one of our most successful Go Vegan World ads. In a world where veganism has been reduced to consumerism and diet, Fairy encapsulated the essence of a way of living that respects others because they feel and because they too have rights. 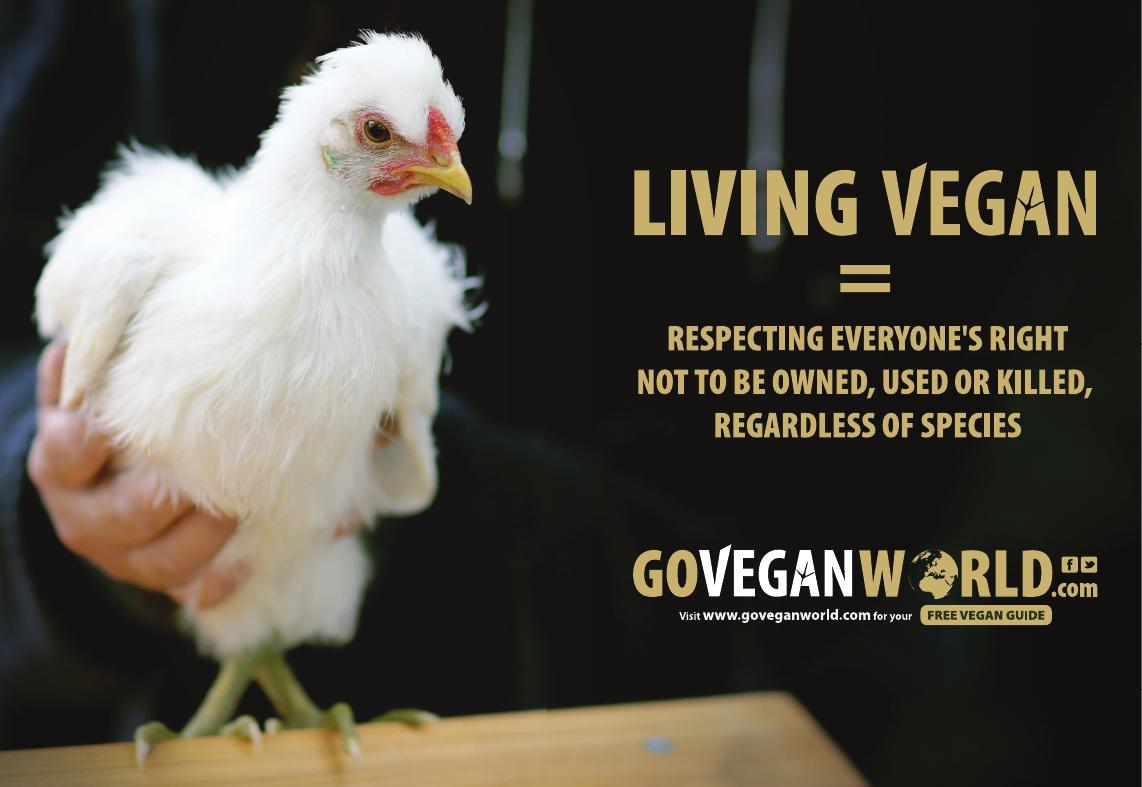 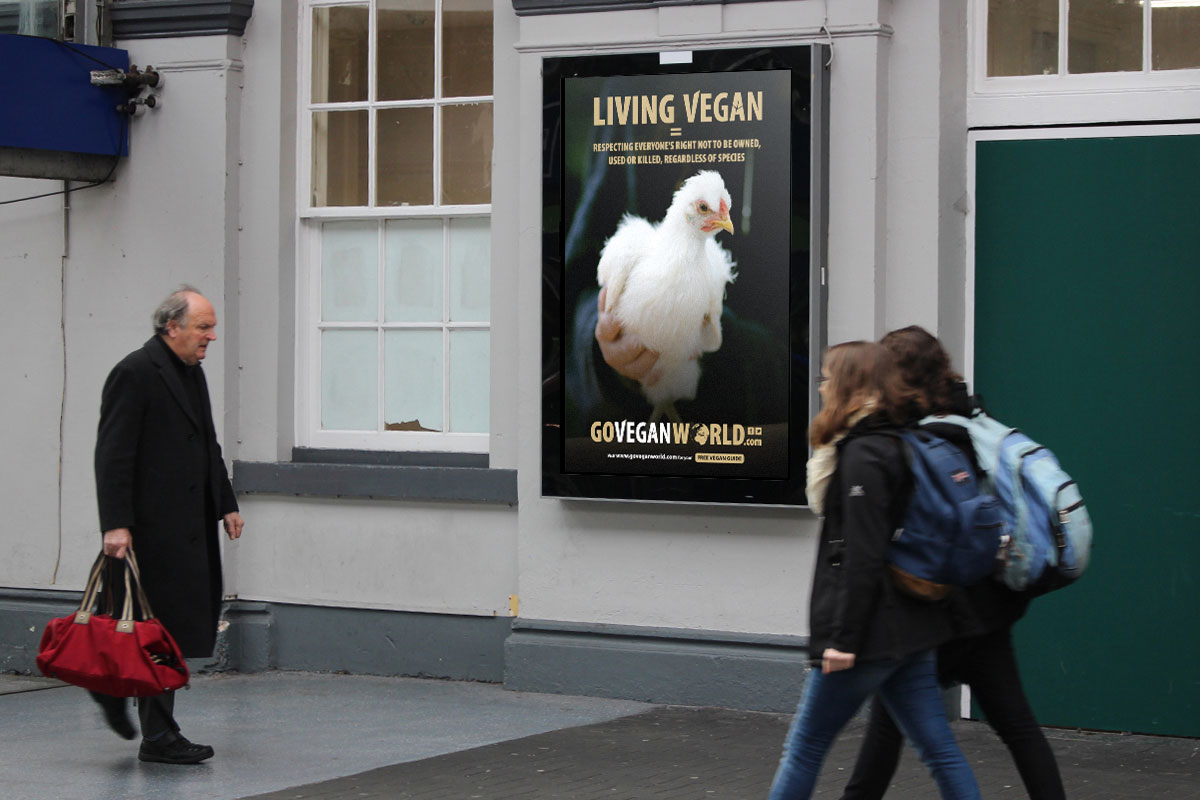 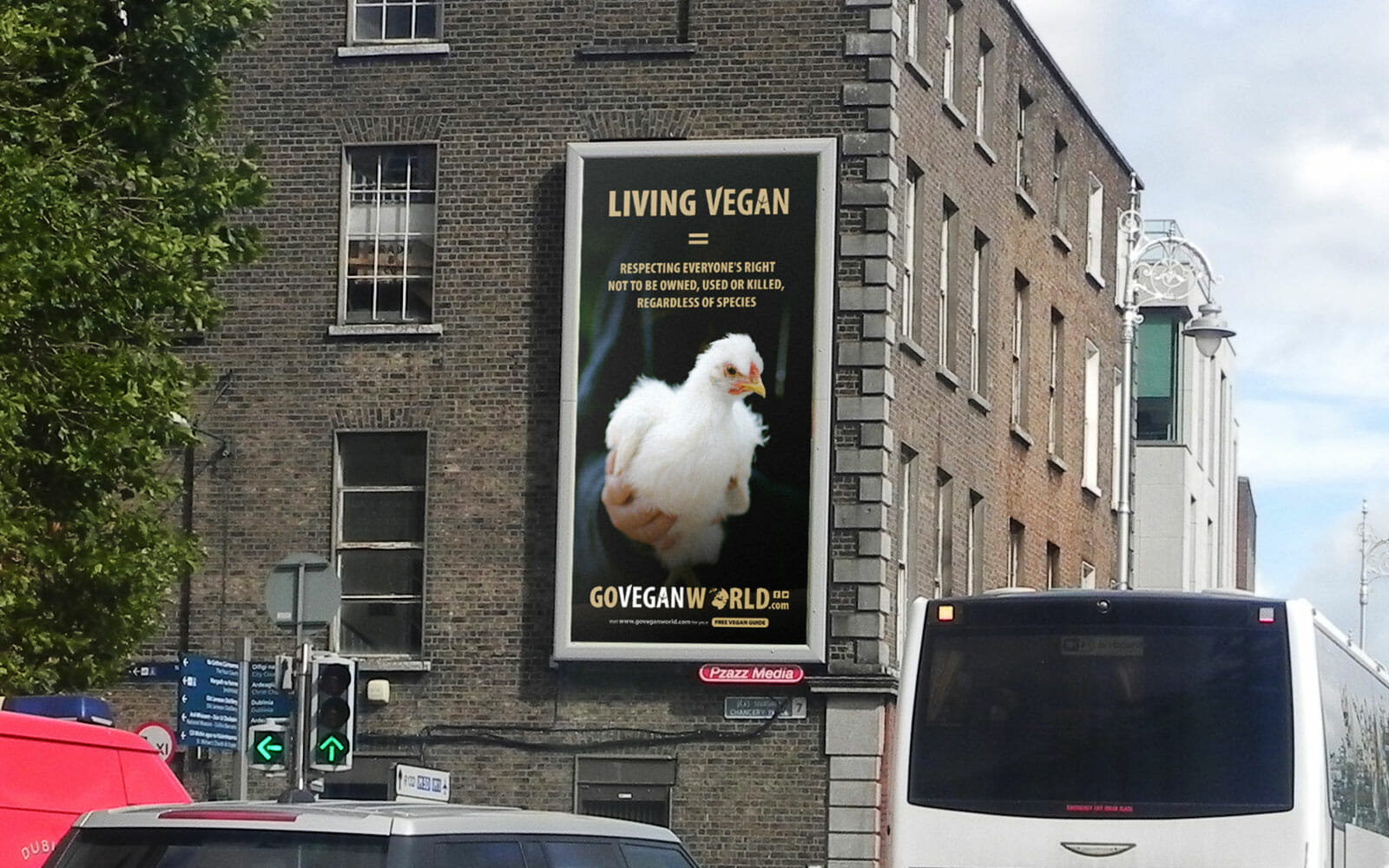 She became ill very suddenly. Only a week ago she was hopping into the basin as Marie was filling it in the mornings, drinking as the water poured in. Yesterday she was suddenly listless and her face was unusually pale. We had her admitted to an excellent veterinary hospital where the avian specialist quickly diagnosed liver failure.

When Fairy first matured she received several Suprelorin implants to prevent egg laying. Each of them failed. We were concerned about putting very high dose implants into her tiny, fragile body. As she was mostly a Silkie breed of hen we decided, after much deliberation and veterinary consultation, to leave her alone without implants. But she was a cross breed, a victim of careless backyard breeding, and there was also a breed of hen in her that is used commercially to over-ovulate to cater for the non-vegan demand for eggs. We have now learned of the connection between ovulation (egg laying) and liver disease in hens. This is one of the references on the subject that is worth reading. Everything about the egg industry, and the fad for keeping chickens in the backyard or garden, is disrespectful to them.

Fairy got every chance to recover and for a while she brightened, was grooming herself and chatting. But she suddenly began to suffer and I had left permission for her to be euthanised if that happened. If she had not been at the veterinary hospital, she would have died an agonising death. Our hearts are chilled to know that she writhed and screamed before she died, albeit only for seconds before the vet intervened. How many hens die on egg farms with no one to hear their screams? And I am quite sure every one of them screams in agony and fear at the slaughterhouse.

Fairy brought endless love, joy, fun and entertainment to our lives. We had no idea that we would lose our little friend when she was only three; that her rushing, talkative, meaningful life would suddenly be snapped out on her just when she was living and loving it. She will always be precious to us.

In Fairy’s memory we have set up the Eden Hen Implant Fund. Please donate as generously as you can. Thank you. 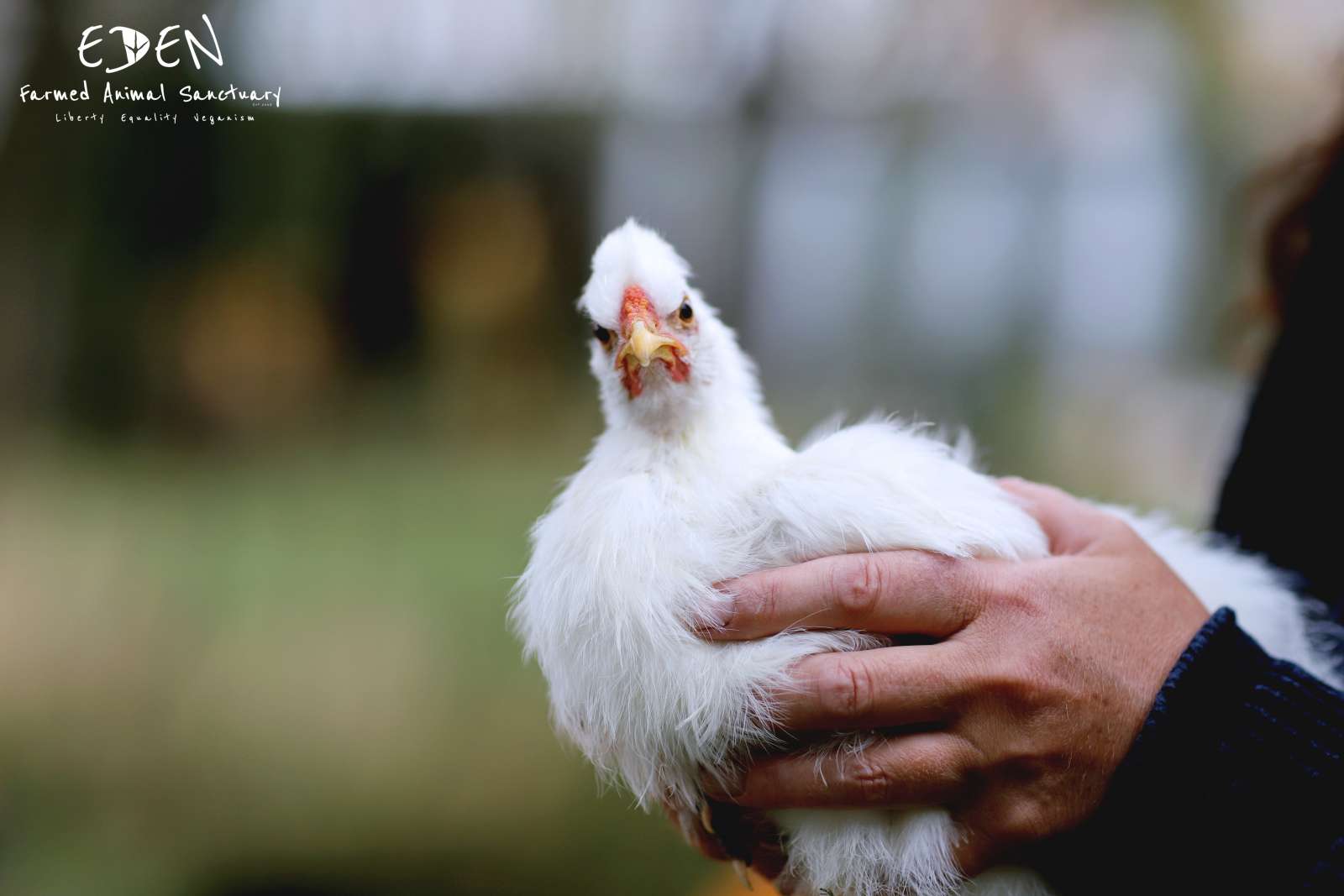 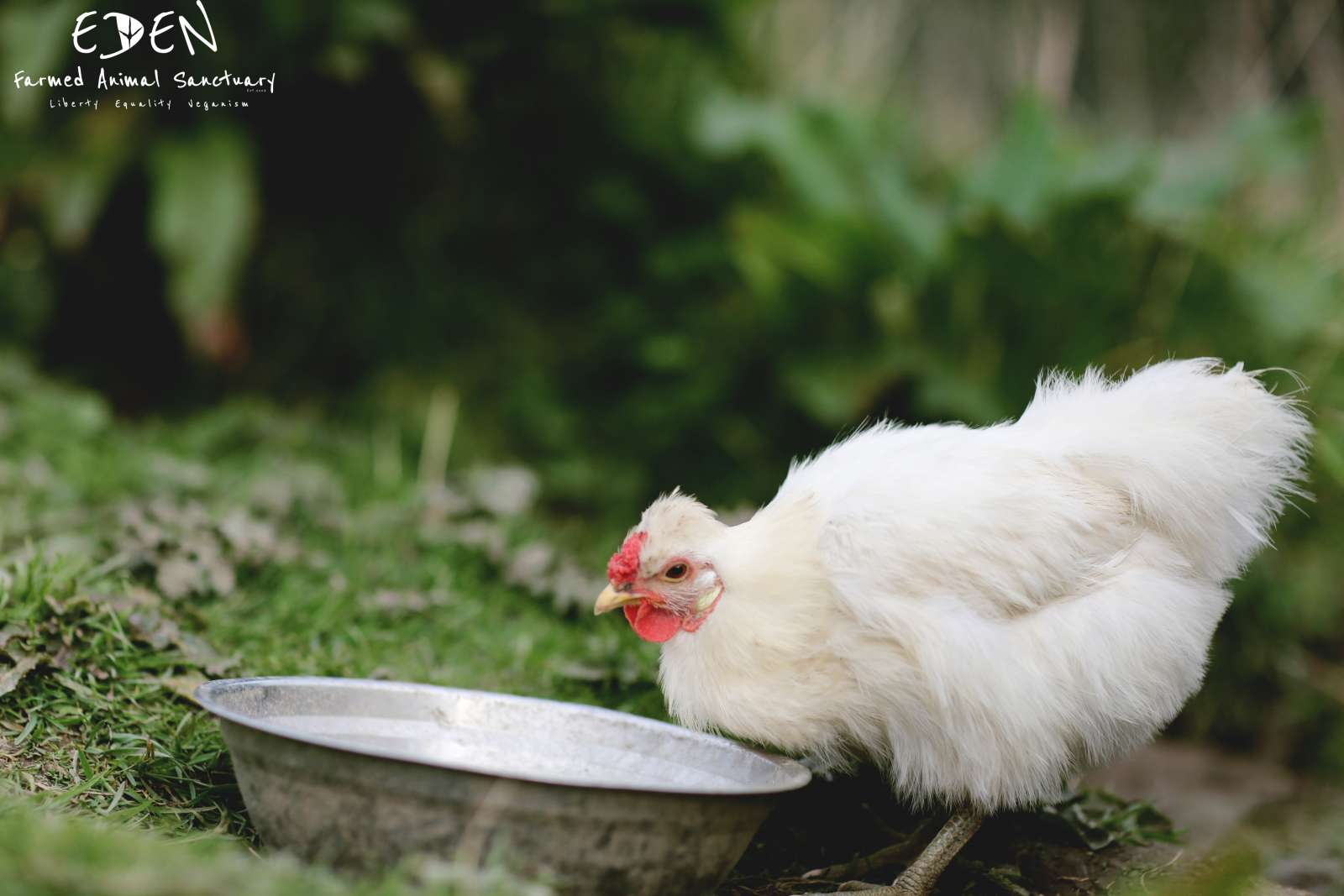 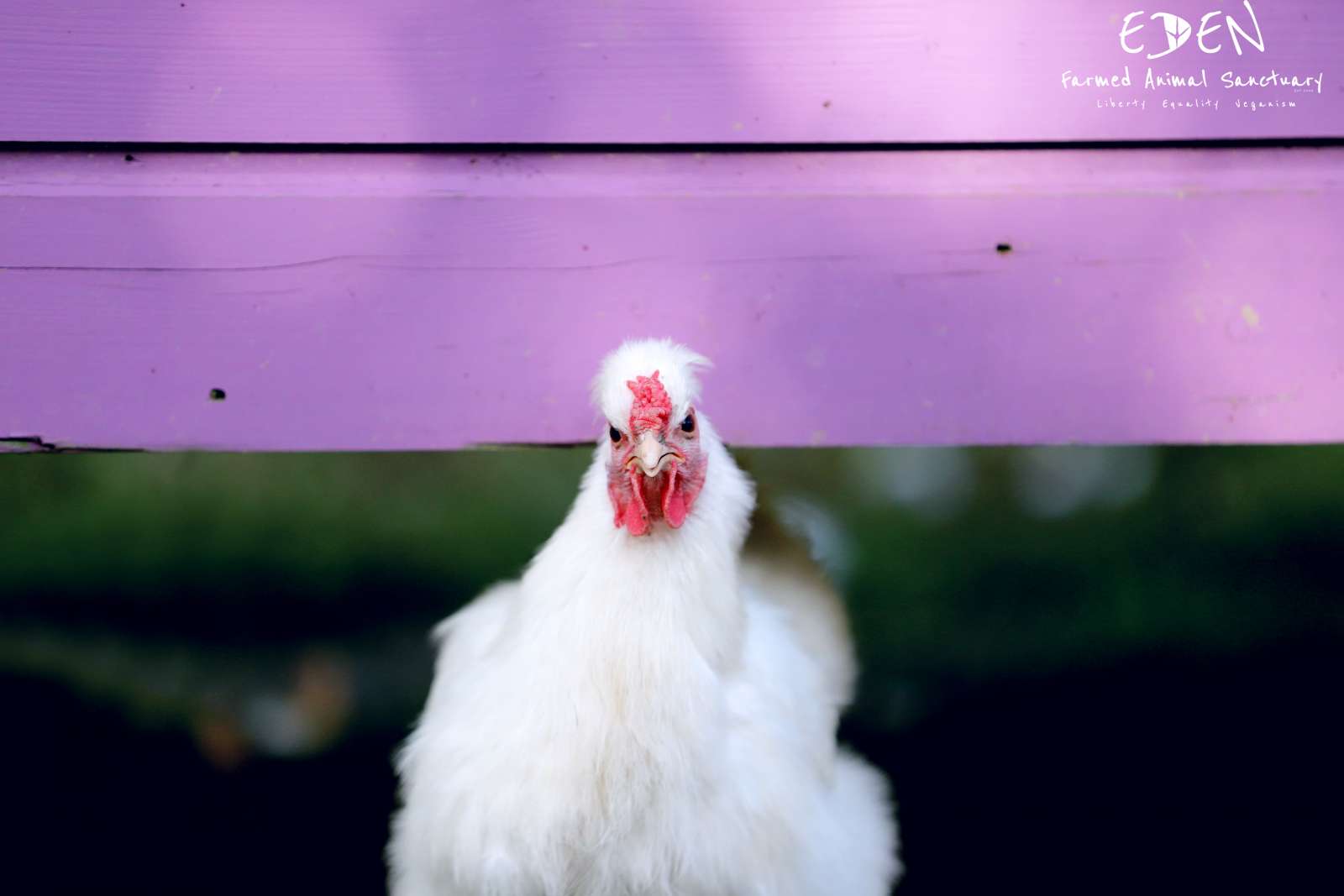 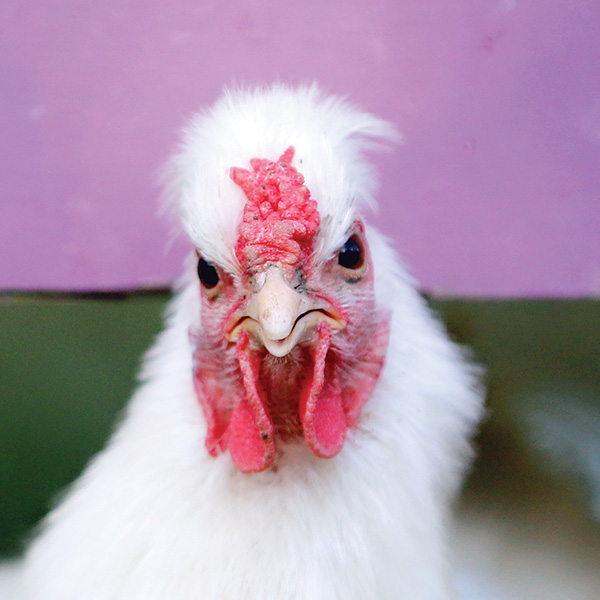