A Summer at Eden: Roxy Kushner describers her Internship at Eden Farmed Animal Sanctuary in Ireland 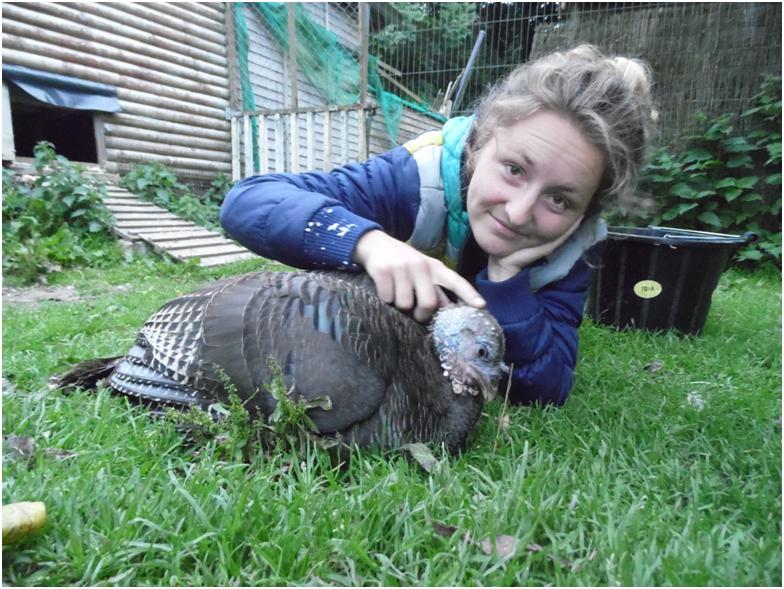 What influenced your decision to do an internship/volunteer at Eden Farmed Animal Sanctuary?
I had worked at a sanctuary for farmed animals in the United States the summer before going to Eden and I fell in love with the work. When I learned about the opportunity to intern at Eden Farmed Animal Sanctuary, I immediately applied because I knew how rewarding the work would be and how much of a difference I could make in the residents’ lives there. 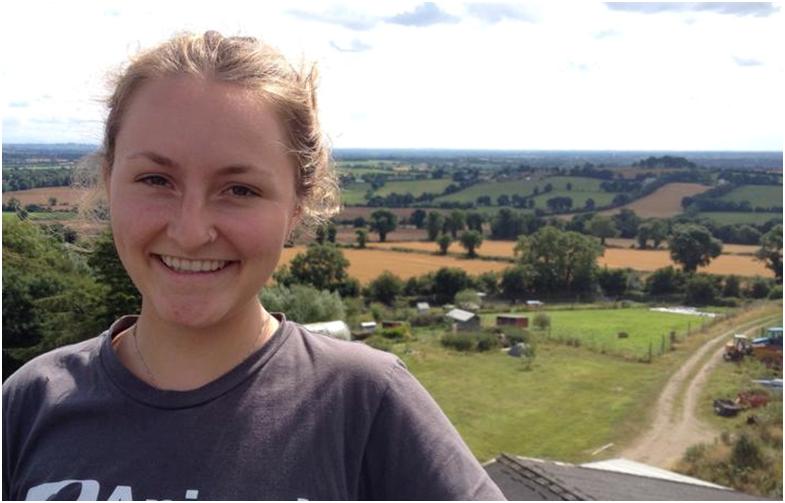 Figure 2 Roxy with Eden Farmed Animal Sanctuary in the background

Can you describe your first impressions of Eden?
Eden was warmly welcoming and the sanctuary felt like a very safe place. It was so beautiful seeing the chickens, ducks, turkeys, geese, and sheep roam freely and without the threat of exploitation or death. 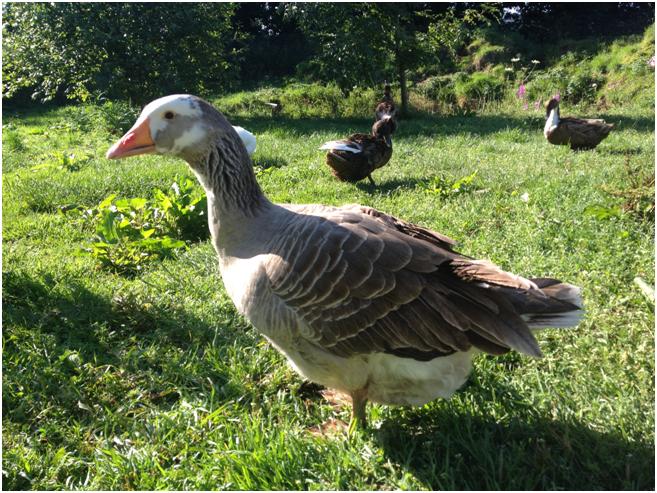 What goals did you have when you came to Eden?
I came to Eden hoping to help with the growth of the sanctuary which has been in operation since 2008. I also wanted to establish my own interests a little more as I explored the work and spent time with the animals. 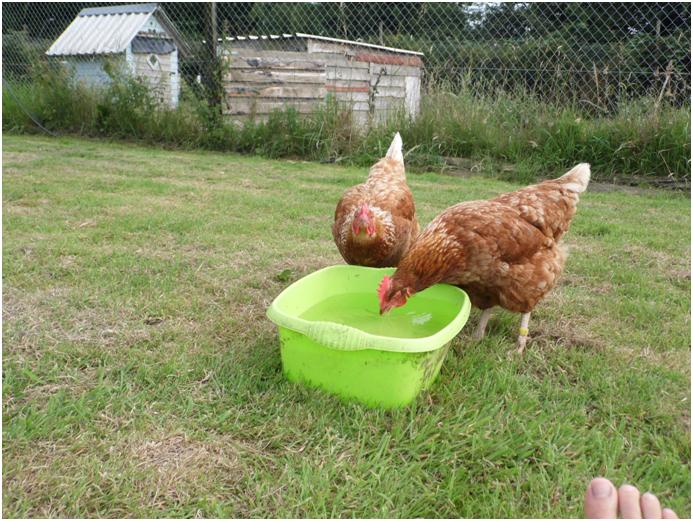 In what ways were your goals met during your time at Eden?
I left Eden knowing that sanctuary work and animal rights is exactly what I want to be involved in for the rest of my life. It was an incredible and unique experience to work so closely with the residents there and I felt so lucky to spend time with them. I know now that I want to continue this work into my future. I also witnessed the sanctuary transform as we painted the houses and made new additions here and there; it became even more beautiful and welcoming. 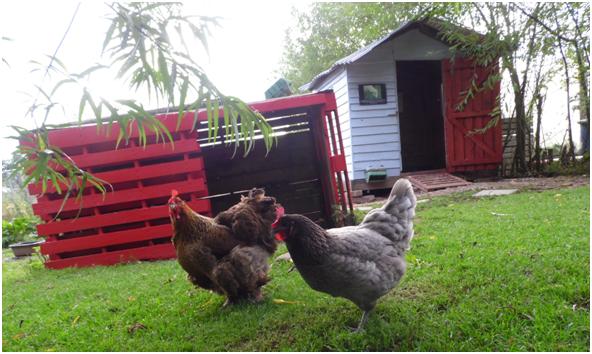 Figure 5 Breffni & Martha and their newly painted home and shelter

Did your experience at Eden change your perception of other animals?
Ever since becoming vegan two and a half years ago, I have seen all animals as equal, but my time at Eden reestablished that belief. It is a different experience to read about farmed animals online or in a book than to actually observe them in real life. I was amazed every day to witness just how distinct and strong each of their personalities is, and how clear it is that they have specific desires and destinations. Every day when I came into feed the chickens, for example, they would run from across the field, their little bodies wiggling as they tried to speed toward me; they knew I had food and they knew they wanted some. 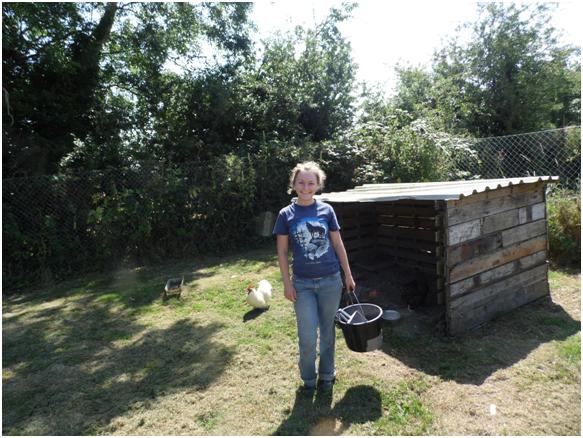 I also witnessed how smart they are. For instance, when I went to clean the chickens’ houses in the mornings, they would all gather around outside the house, waiting for me to collect their eggs and feed them back to them. 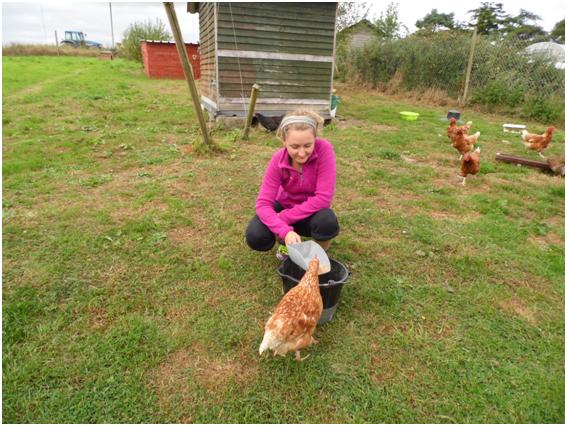 Some of the girls were extra friendly, too, and might jump on my back as I cleaned their house or untie my shoes as I lay in the grass with them. 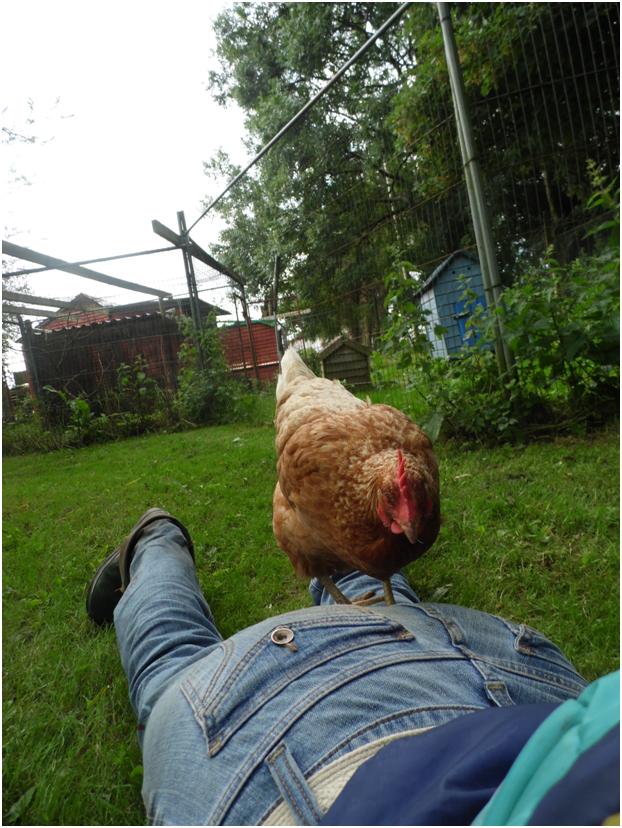 Figure 8 Roxy and Verona having fun in the sanctuary. Verona (rescued two years ago from an enriched battery cage) is a very curious, friendly hen

What was the most enjoyable aspect of your experience at Eden?
My favorite part of working at Eden was spending relaxed time with the animals. I tried every day to find a moment to just sit in the grass and watch the chickens scavenge for bugs or the ducks swim in their pond. Furthermore, Megan, the turkey, used to love hugs, so I would sometimes spend twenty or thirty minutes just sitting with her and hugging her. 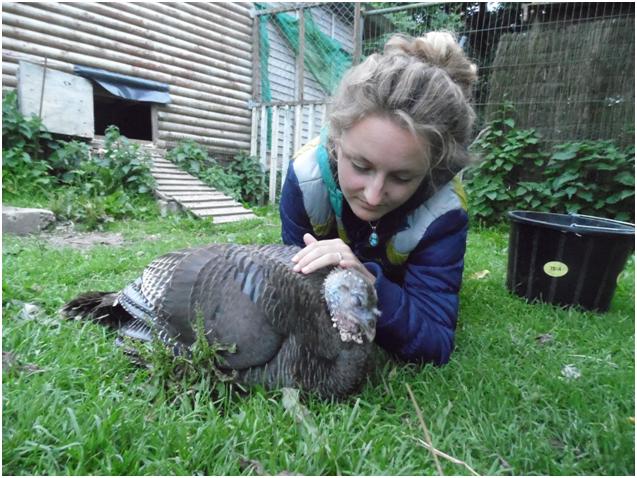 What was the most difficult aspect of your work at Eden?
The most difficult part of work at Eden was knowing that, while we had many safe animals on our sanctuary, there were still millions more waiting to be rescued from the animal agriculture industry. We worked as hard as we could every day, but it was difficult not to think about the ones out there that are still suffering. I had to remind myself every day that we can only do our best and give everything we can to the residents at Eden. 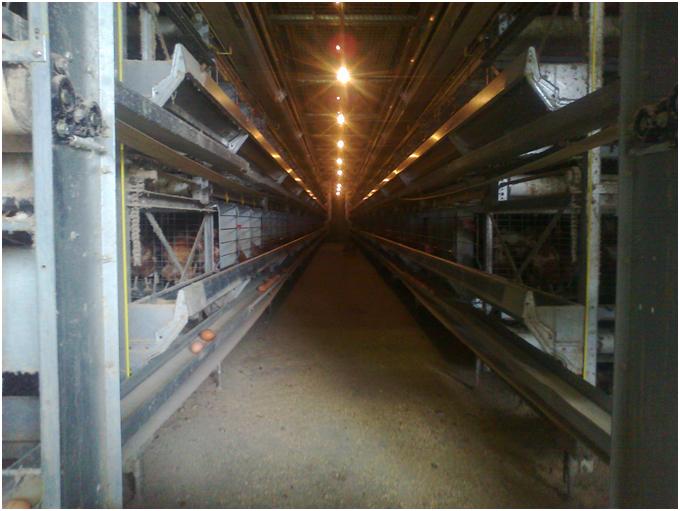 Describe a typical working day at Eden?
I woke up each morning to feed the animals, refresh their waters, and clean their houses. Then I would water the polytunnel, and the vegetable and fruit garden. 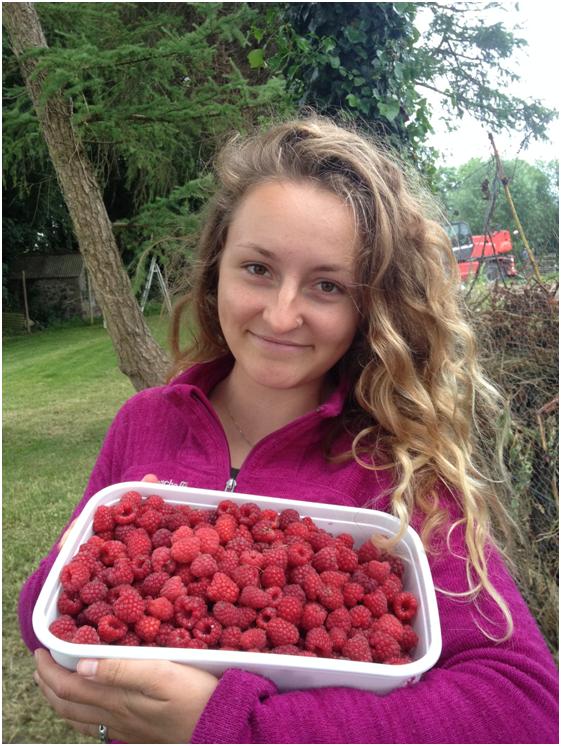 Figure 11 Raspberries from the garden at Eden

There would always be miscellaneous tasks like disinfecting or painting the animals’ houses; taking photos of the animals enjoying their freedom; harvesting veggies and herbs for our meals; or picking all kinds of berries for deserts, jams, or to feed to the chickens and turkeys. 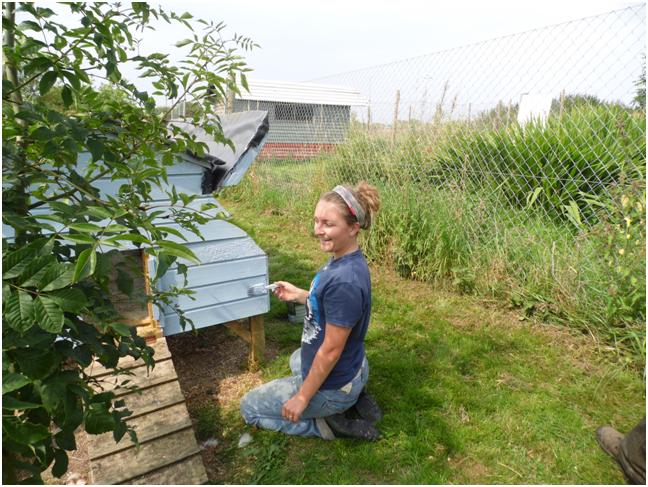 I also assisted in the medical care of the residents who were ill such as giving oral medicine or injections. I helped drain hens who had ascites and I also helped out with routine healthcare and illness prevention regimes. It was interesting to exchange information with Sandra on the best methods of care for residents who are ill and to share information with her that I had learned in my previous internship. 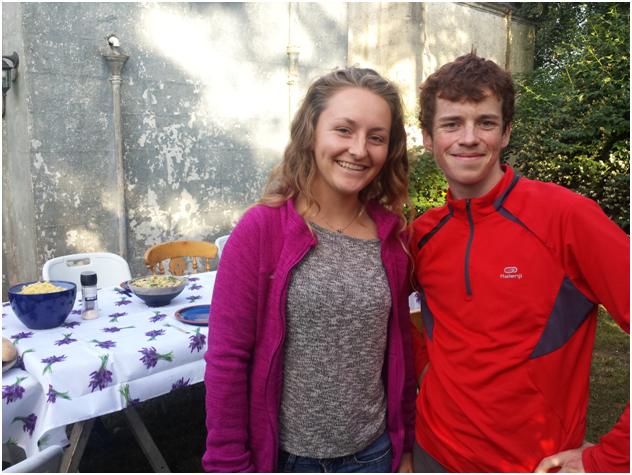 After our delicious vegan lunch, prepared for us every day by Sandra, I again fed the animals and then typically had a break to relax for a few hours. Once it became dark, we picked up the food for the night and made sure everyone was safe in bed.
Judging by the amount of work Sandra, the other volunteer and I did every day, I am amazed that Sandra is usually able to run the sanctuary on her own, which doesn’t only include looking after the animals, but also outreach, education, management, and much more. I would think at least four full-time employees would be necessary to smoothly run the sanctuary into the future. 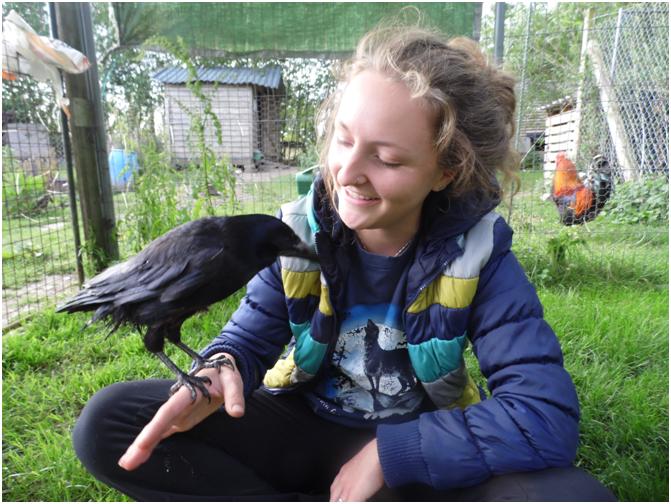 Figure 14 Roxy with Razzle, one of the blind residents at Eden

What did you learn about the vegan education aspect of the work at Eden?
Although I had been vegan for two years before arriving at Eden, I learned something new every day while I was there. Whether it was by spending time with the animals and observing their behavior, speaking with Sandra about farmed animals and animal rights, or watching videos, I greatly expanded my knowledge of veganism, activism, and sanctuary work while I was at Eden. Furthermore, I was housemate with another volunteer who was vegetarian but very interested in becoming vegan, so I taught him as much as I could about the lifestyle and why people choose it. He had very challenging questions for me, so I really had to consider all aspects of the argument before I could answer him. By doing this, I think I, myself, gained a more rounded knowledge of the vegan lifestyle and it grounded me even more in my beliefs.

Please describe any new facts about animal rights that you learned whilst at Eden.
I learned even more that animal rights is a very touchy topic with most people in this world and that activism has to be thought out very clearly and in depth for it to have any impact on a person’s lifestyle choices. By listening to Sandra speak with visitors about the sanctuary and veganism, I realized just how unfamiliar the vegan lifestyle is to everyone. Most people who came to visit the sanctuary had never understood why a person becomes vegan, or what the animals endure in the meat, egg, and dairy industries. It was interesting to meet these people and listen to Sandra speak with them and then observe their stunned reactions. There was a very emotional experience on one occasion when Sandra explained the health issues that hens endure by laying eggs to a visitor who kept hens in her backyard. The visitor was reluctant to accept Sandra’s argument until the next day when she returned to the sanctuary for help with one of the hens in her yard who had suffered a severe prolapse. The hen did not survive.

Please describe any new facts about our relations with other animals that you learned whilst at Eden.
I grounded my beliefs that all animals are equal and that each of us has the ability to love, to form relationships and friendships, and of course to feel pain and experience sickness.
I, myself, became very close with some of the animals and felt I had a stronger connection with some than I did with others, just like any human might feel about other humans or about their dogs or cats. 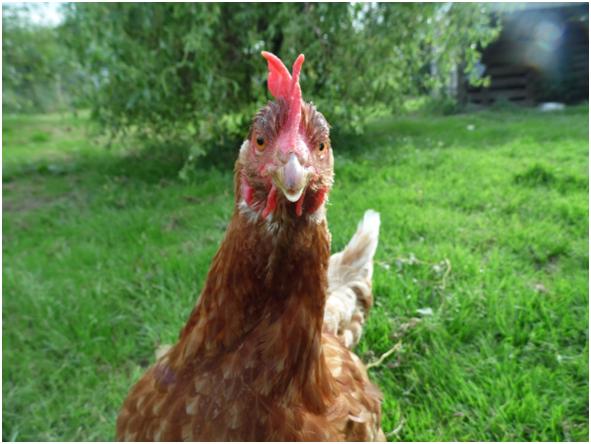 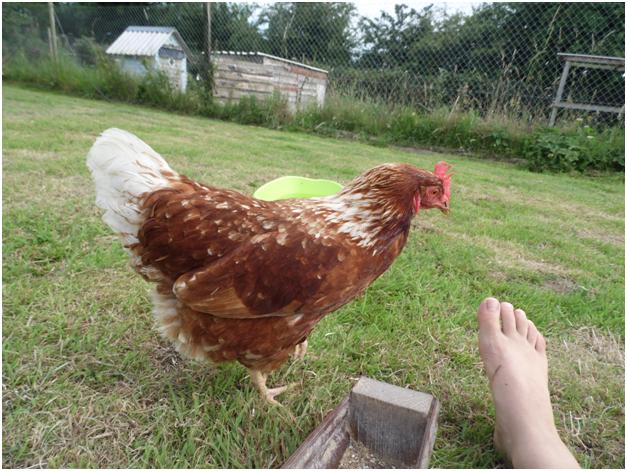 Would you recommend others to apply for an internship/to volunteer at Eden?
An internship at Eden is an eye-opening and unique experience. It is so lovely to spend so much time with these freed animals and experience them as equals instead of as commodities or machines that produce something that we want. I learned so much during my time at Eden and would recommend it to anyone who is remotely interested in farmed animals or animal rights. 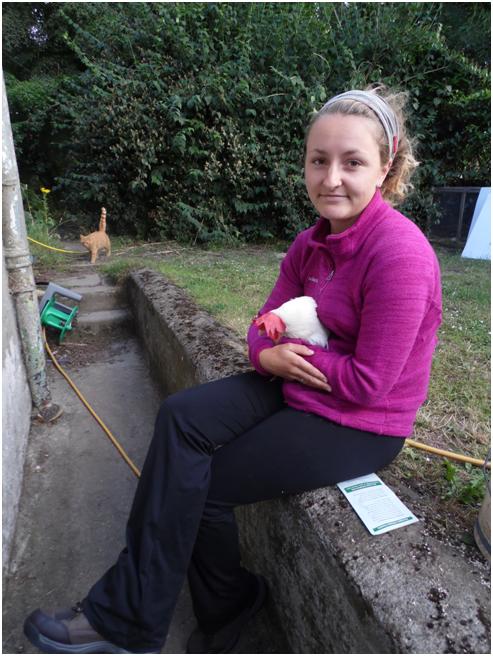 Figure 17 Roxy with Margaret, one of the blind residents at Eden

Has your experience at Eden influenced the way in which you now conduct your activism?
I think my time at Eden made me a more devoted activist. I notice now that throughout the day I find myself talking to more and more people about veganism. I don’t think there was one single event that instilled this change in me, but rather it was observing Sandra talk about the sanctuary and veganism to anyone and everyone she possibly could. I feel like I need to do as much as I possibly can to promote the end of our use of animal products and so now I, too, talk with several people every day about veganism. 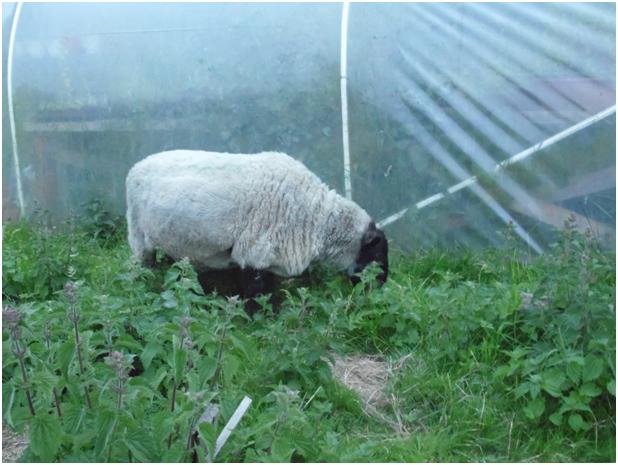 Figure 18 Cara, one of the first residents at Eden

Are there any other impressions or learning experiences that you had at Eden?
I honestly think that my most memorable and best learning experiences came from the times I took a moment to relax and just watch the animals roam and interact with each other. It made me so happy to see these animals free to do whatever they want whenever they want. I felt lucky to spend so much time with them, learn their personalities, and become close to each of them. 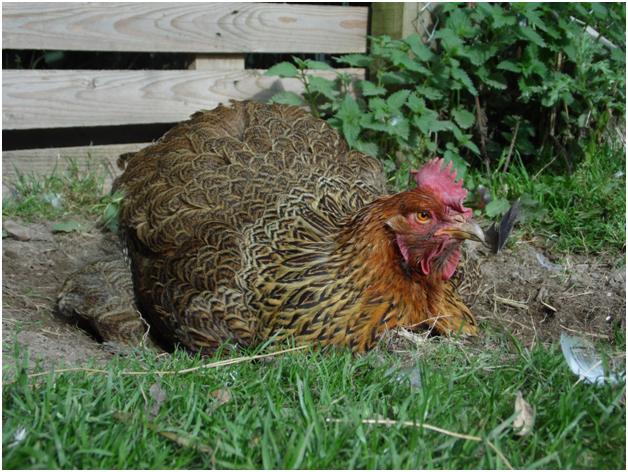 On behalf of the residents at Eden Farmed Animal Sanctuary, Director Sandra Higgins, extends deepest gratitude to Roxy for her patience, compassion, dedication and effort. Roxy’s internship was a pleasure to everyone at Eden and the sanctuary is a better place for having her as a Friend of Eden.