A Tribute to Amy: Victim of the ‘Humane Meat’ Myth 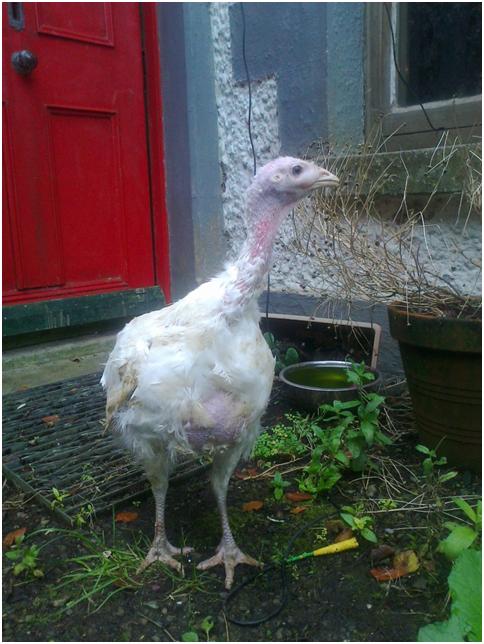 Figure 1 Amy recovering at Eden from severe neglect and exploitation

Amy came to be at Eden because of the watchful eye of an animal rights activist. Jenny called me one day to ask if I could take a turkey she had been keeping an eye on in a smallholding (a backyard keeper of other animals for the purposes of so called ‘humane’ meat, dairy and eggs). Jenny reported that this turkey appeared to be very ill. She was kept confined to a very small area along with pigs, chickens, ducks, and other turkeys: all were being raised as food animals. The smallholder refused to spend money on treatment for this turkey, but he hoped she would recover and gain weight so that she could be killed for Christmas. Jenny persuaded him that the turkey needed extensive treatment and would be better placed at a sanctuary.

We arranged for Amy to be transported to Eden, but when Jenny went to collect her the smallholder had changed his mind. He had managed to convince himself that his smallholding was a sanctuary and that the animals he was neglecting and whose lives he planned on taking for profit were happy. “Ask the Sanctuary owner to tell me what medicine I should use on the turkey to get her better for Christmas,” he said, indicating his intention to kill her for Christmas dinner or to sell her as ‘humane meat’ for profit.

We did not have a lot of money to spare at Eden. I knew I would be faced with bills for the treatment of this turkey. I had past experience of rescuing turkeys who were destined for the ‘humane meat’ market and I knew the cost they paid in terms of their health. 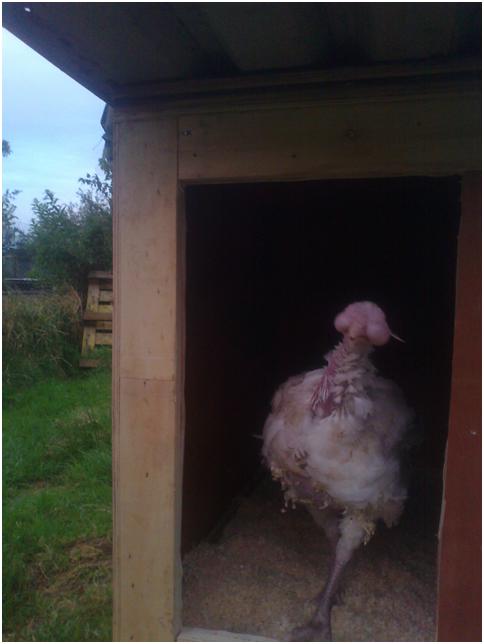 I was aware that if Amy was as ill as her description indicated, she might die despite our best efforts. I wasn’t entirely sure where at Eden I would put her or how well she would integrate with the other turkeys.

But I knew that whatever facilities we could scrape together for her would be better than her conditions with the smallholder and the certainty of a brutal death at his hands.

We proceeded to fence in an area and construct a house for her at the sanctuary.

I asked Jenny to go back to the smallholder and tell him that we had prepared a place for her at Eden and that we also had a place in our hearts for this turkey, whom we had already named Amy.

It worked. The smallholder relented, and at 4 a.m. one morning Amy began her journey to Eden. 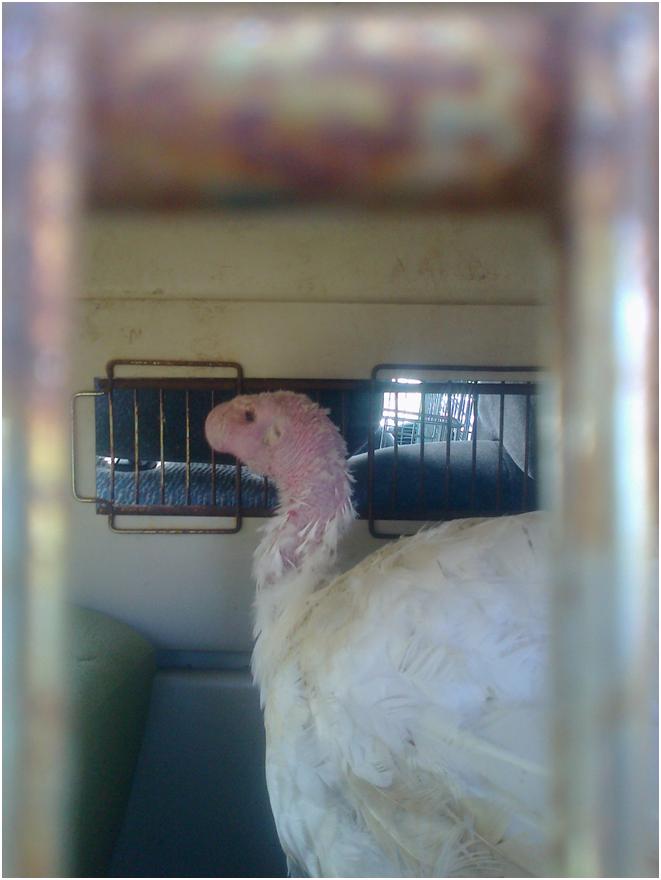 Figure 4 Amy on her way to Eden 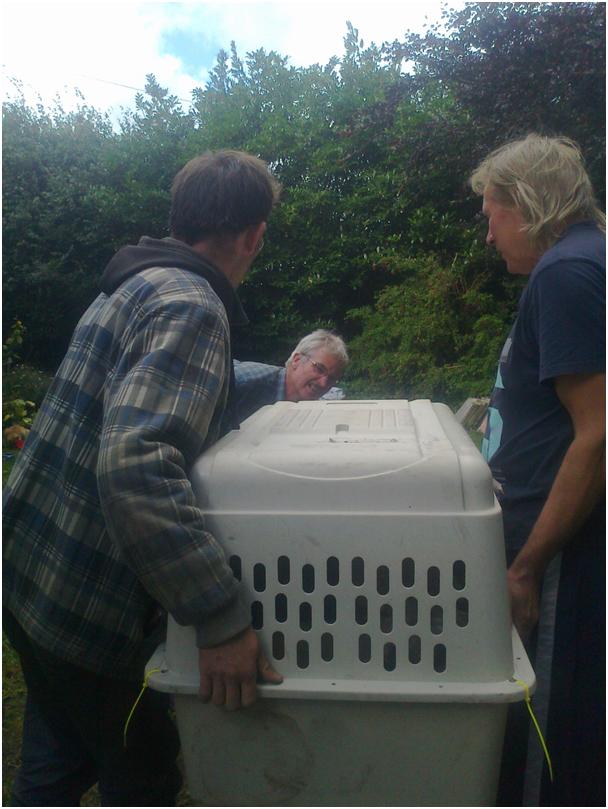 Figure 5 The rescue of Amy with Sany, Ronnie & Declan 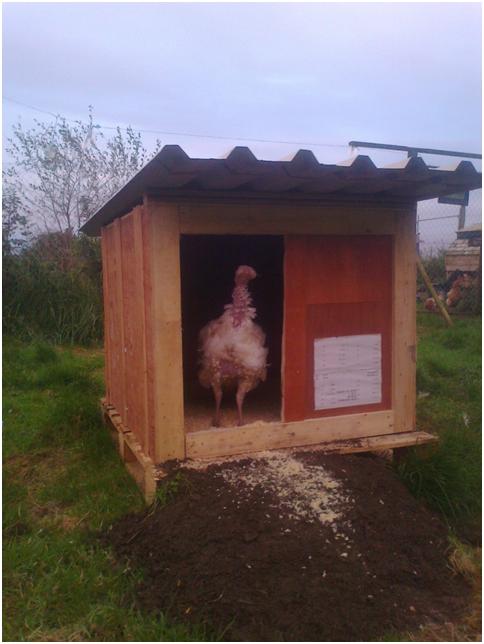 Figure 6 The house we built for Amy

Her face was a horrifying sight when she arrived. Her sinuses were so badly swollen with untreated mycoplasma that her eyes were completely hidden and she couldn’t see. She had difficulty breathing. She had extensive feather loss from being bullied by other frustrated birds, who had been confined with her in a very small backyard. She was very thin and badly dehydrated. Yet her delicate beauty was visible beneath the evidence of her trauma. 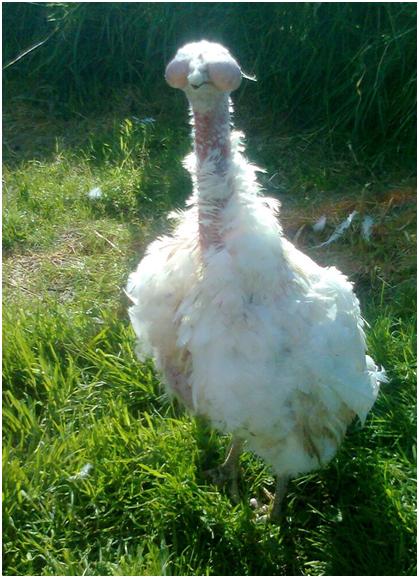 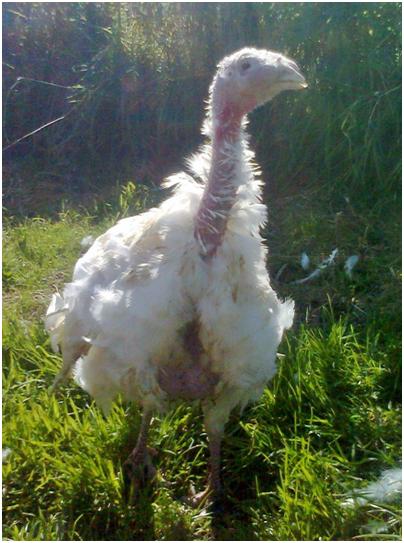 She was frightened of me, and it was heartbreaking to witness her fear as I tried to help her. Every time I approached her she would get into her dish of food, turn a few circles, and crouch as low as possible to try to hide from me.

She arrived at Eden in time to make an appearance in the film “You Haven’t Lived Until You’ve Hugged a Turkey,” where she represented so-called ‘humane’ meat, in an effort to educate people about the absolute contradiction of the term, and the terrible suffering that our traditional Christmas dinner causes such gentle, innocent creatures. 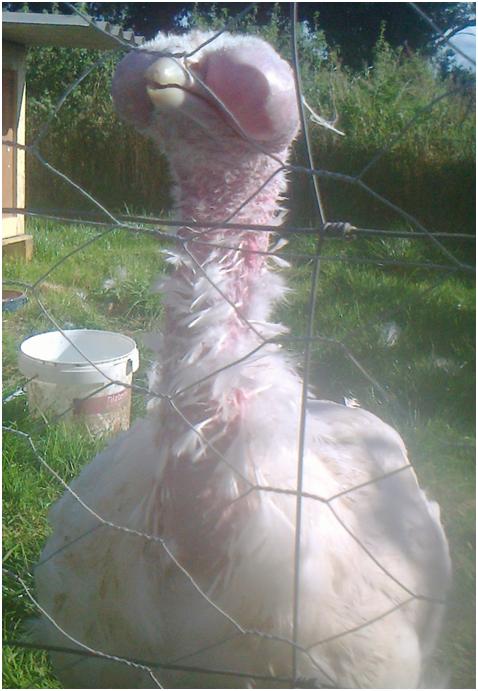 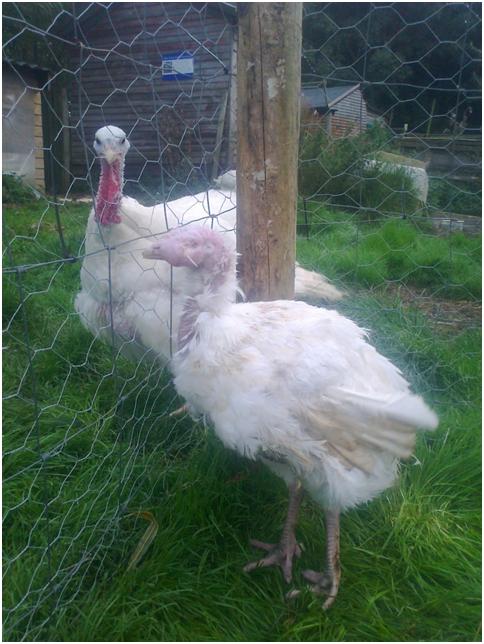 Figure 10Amy meets the other turkey residents at Eden

She was unable to live outside, so I took her indoors and treated her with appropriate antibiotics, pain killers, a good diet, and the warmth of a heat lamp. She also experienced the love of a human for the first time in her life. Slowly, Amy began to heal, although it took months of treatment for the swelling in her sinuses to completely abate. She also began to trust me. 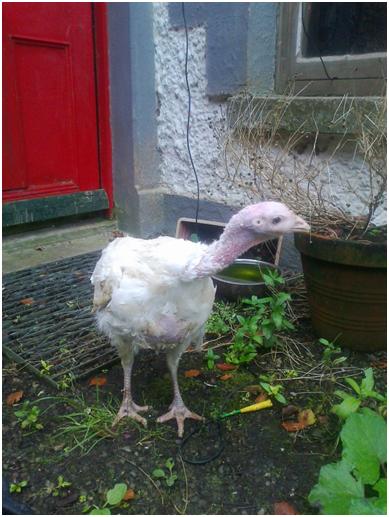 Figure 11Amy’s first day outside after weeks of treatment 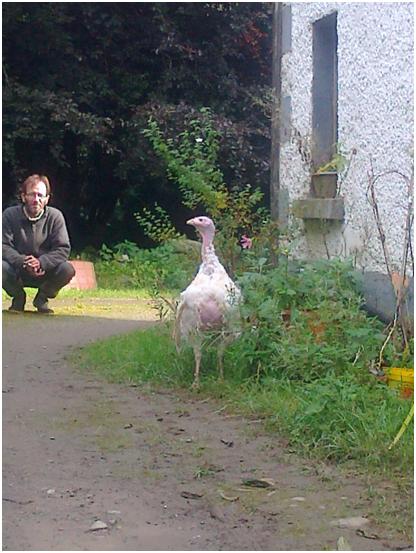 Amy had a very gentle character and was never to be as robust as some of the other turkeys at Eden. She continued to have difficulty eating, and at times she almost choked on her food, probably because she was used to breathing through her mouth and couldn’t breathe properly when she ate. 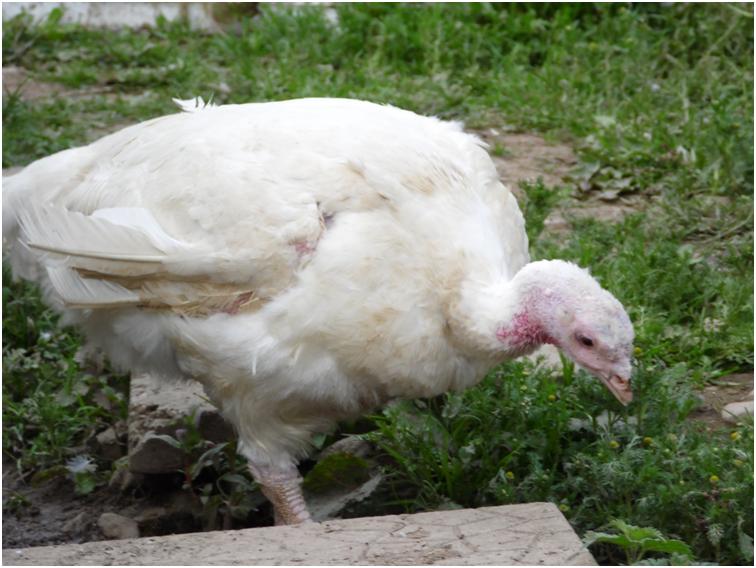 Yet she adjusted to Eden and to the turkeys who already lived there, and she became friends with those who were rescued after her. 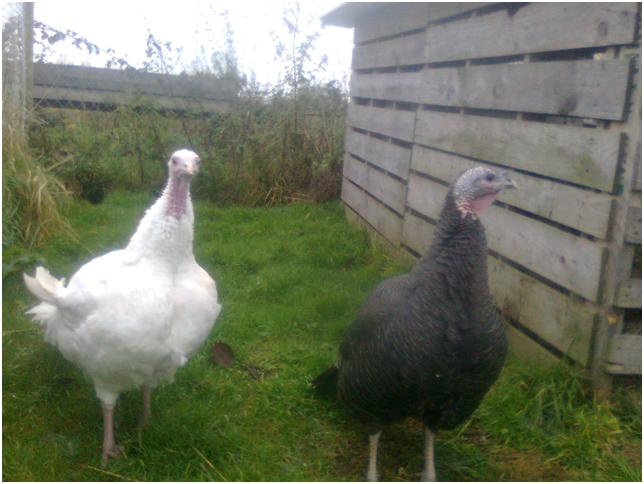 Figure 14 Amy one year after recovery, with her friend Megan

She grew to be a very happy, contented girl who loved to dustbathe and roam around the grounds at Eden, and who, like every other female turkey I have ever known, treasured and guarded her eggs during spring and summer. 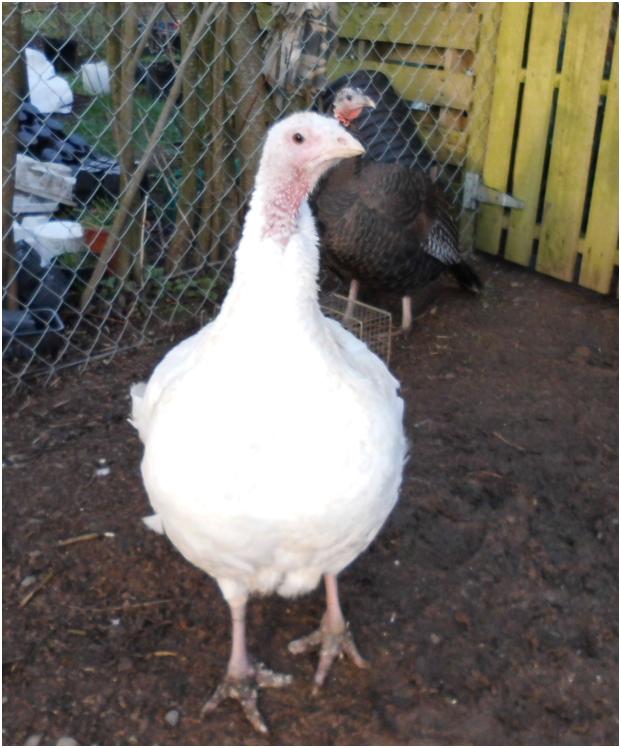 She also demonstrated her extremely affectionate character and would run the length of the sanctuary, on her dainty, elegant legs, to greet people with a hug. 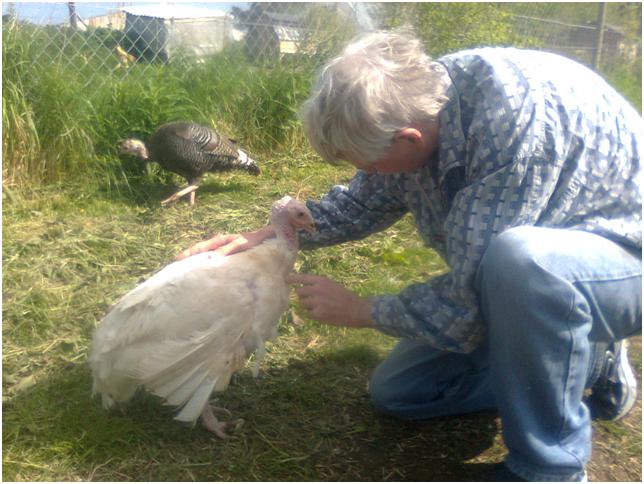 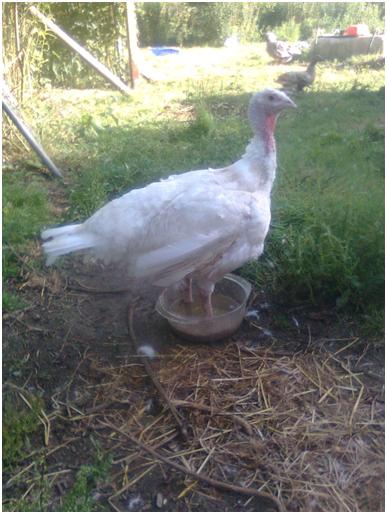 Amy had recurrent bouts of the infection she arrived with. Eventually she developed secondary infections that were resistant to almost all traditional antibiotics. She may have also had a heart condition. For this reason, we decided against surgical investigation or treatment of her sinus condition.

By now she was living indoors with us because she was too ill to live outside. Her friend Megan was grief-stricken without her, and called for her at the sanctuary gates for days after we took Amy indoors.

Shortly before her death I had to make the difficult decision about whether to treat her with one of only two antibiotics that her swab and culture indicated the infection might be sensitive to, but which carried the risk of serious side effects, including renal failure. I decided, along with our vet and pharmacist, to treat her but proceed with caution.

With trepidation at having to inflict stress and pain on Amy, and wondering if I was making the right decision, I drew up her first antibiotic dose. As I was doing this, Amy became stressed and had difficulty breathing.

She had had a good day. I roasted some butternut squash for her earlier in the day and she ate and drank much better than she had in previous days.  She was inquisitive, affectionate, and enthusiastic right up to her final half-hour, when she became stressed and unable to get enough air.  Although she was frightened, she died quickly, and I was with her.  I think she knew how much I loved and valued her.  If I didn’t know better, I would say she chose her moment to leave us to save me the heart-wrenching thoughts I would have had if I had administered the antibiotic and imagined a reaction to it had caused her death.

She was a very gentle, lovely girl, who didn’t even reach two years of age. 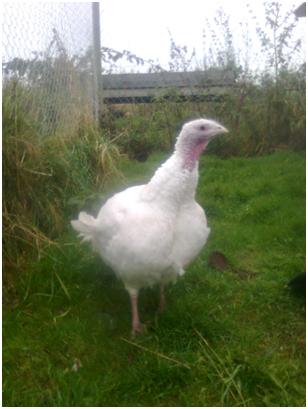 Figure 19 Amy at Eden, one year after rescue

My strongest memory of Amy will be of the difference in her from her arrival at Eden in 2012, and the end of this winter (end 2013/early 2014) when the days first got warmer and sunnier and she began simultaneously flapping her wings, hopping into the air as if she was dancing, and speaking in chirruping sounds.  I can’t help believing she was happy.

Amy will continue to be an Ambassador for Turkeys even in death; her photo will continue to be the face of “humane meat.” I will be forever grateful to her for what she taught me about the beauty and gentle innocence of those we needlessly exploit for their bodies.

She was not ‘humane meat’. There is no humane meat. Like all the other animals used and killed for their flesh, Amy was Somebody, Not Something. The only difference between the billions of others and Amy is that she was loved and respected and she had someone to tell her story. 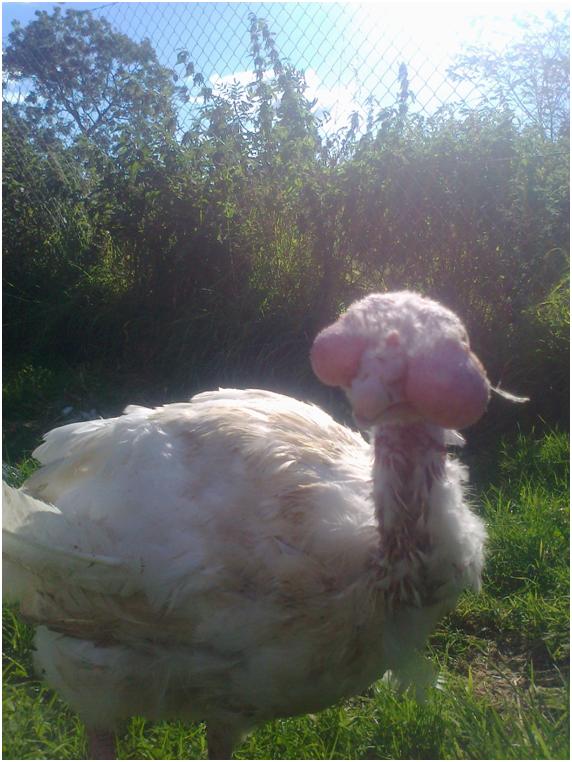 Figure 20 Amy the Ambassador: the Face of “Humane Meat”