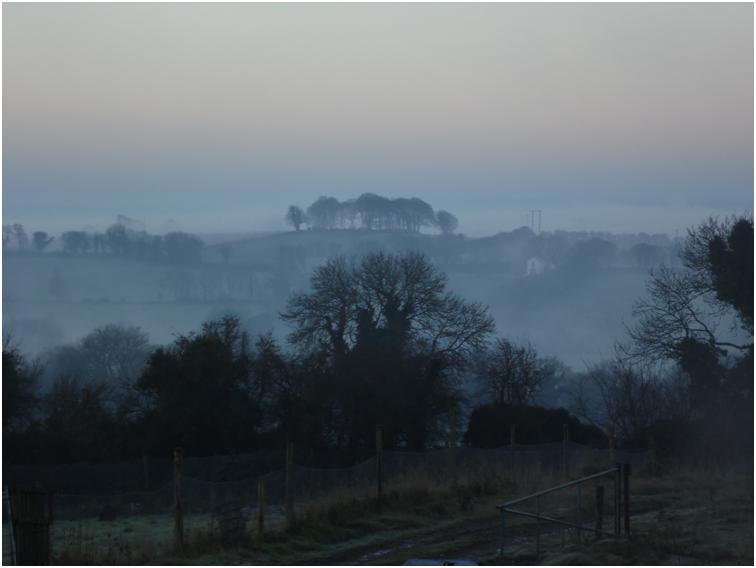 As we enter a new year it is a time for reflection on what has happened and is over in 2014. At Eden we have had a mixed bag of sorrow and joy, success and failure. We look to 2015 with hopeful plans for planting seeds of compassion and justice for our animal kin, rescuing more farmed animals and offering them a life of liberty at Eden, making more vegans, welcoming more volunteers and interns and continuing to support them as they embark on their own personal journeys as vegan educators, social justice activists, or open sanctuaries of their own. 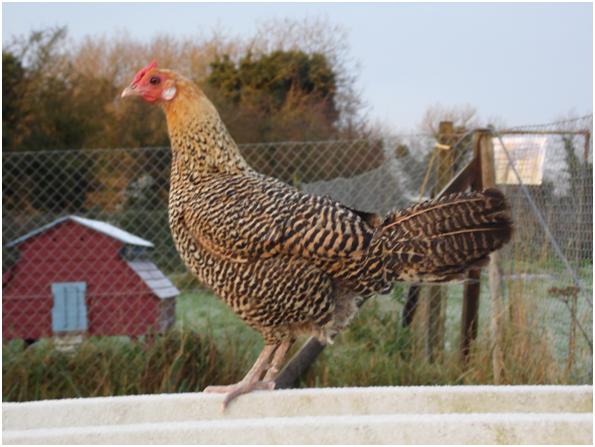 Here is a glimpse at our year: 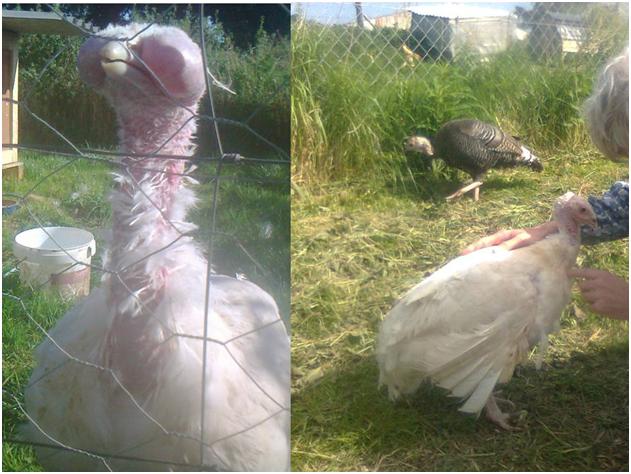 Amy, at rescue and a year later

Amy and Joy continued in their roles as ambassadors of their species, even after their deaths. Their histories featured on Bob Linden’s Go Vegan Radio as well as on Robert Grillo’s Free from Harm website. Amy and Joy will show the world what it is to have been a victim of so called ‘humane’ farming at the forthcoming World Vegan Summit in California next March organised by Bob Linden.

Jerry Friedman engaged in a very enlightening interview on the role of animal flesh in the evolution of the human brain and the speciesist myths that are accepted fact, even in the realm of science that is supposed to be informed objective.

For anyone who missed it, we did another very interesting interview earlier in the year with Roger Olmos creator of the wonderful Senzaparole.

In June we had the opportunity to circulate literature about veganism, animal rights and the work of Eden at the National Concert Hall in Dublin, targeting over 1000 concert goers.

The summer also saw the publication of my chapter on the science of compassion in the book How to be Happy & Healthy, the seven natural elements of Mental Health (ed Maeve Halpin). Two radio interviews (with Gerry Kelly on LMFM and with Paula Wiseman on Near FM) provided the opportunity to discuss the importance of compassion not just for self and other humans, but for all animals and the crucial role of veganism to compassion. The second edition of the book now includes a new section in my chapter on veganism, compassion and justice for all sentient life that was previously omitted by the editor.

We were delighted to welcome some great volunteers and interns at Eden during 2014. This programme has proved to be extremely successful in introducing people to veganism and animal rights activism by immersing them in an environment where they can interact with the rescued residents at Eden and observe our educational programmes at first hand. I am delighted to report that Roxy has gone from strength to strength in her vegan outreach programmes at Santa Cruz University. She attributes her stamina and success to her very deep relationships with the residents she befriended at Eden last summer. 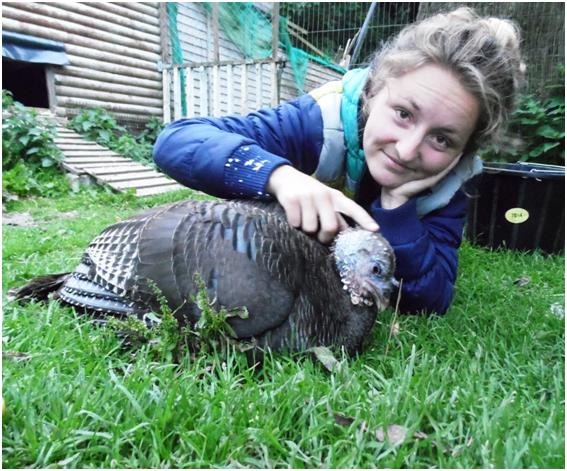 One of the special highlights of 2014 was the presentation and film made by our volunteer Clara Mozes. Clara was not vegan when she came to Eden and her passion for living a life of compassionate activism for justice for other animals is testament to the residents at Eden who make such an impact of the people who meet them. 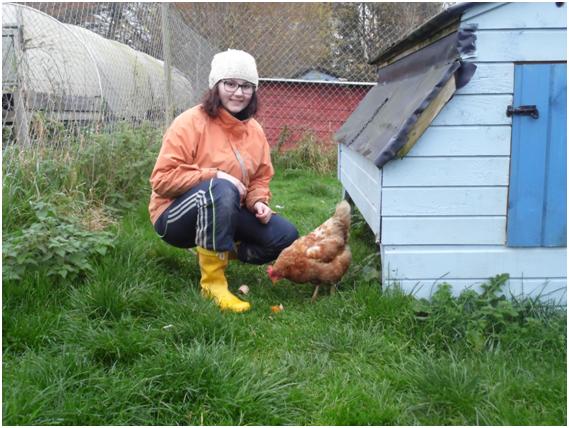 In November Gerry Kelly visited Eden Farm Animal Sanctuary to talk about our work and the launch of our educational programme Compassionate Living & The Power of One. 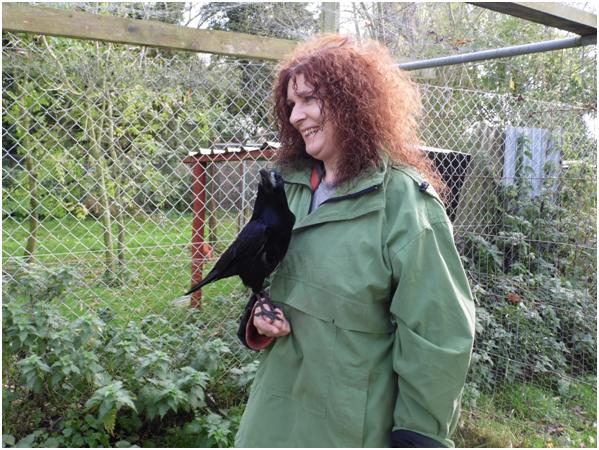 The programme also featured in our local newspaper, the Meath Chronicle. It is still being fine tuned and this first course was a time to learn valuable lessons about the effective elements of vegan education with a diverse population. We look forward to offering more courses in 2015. 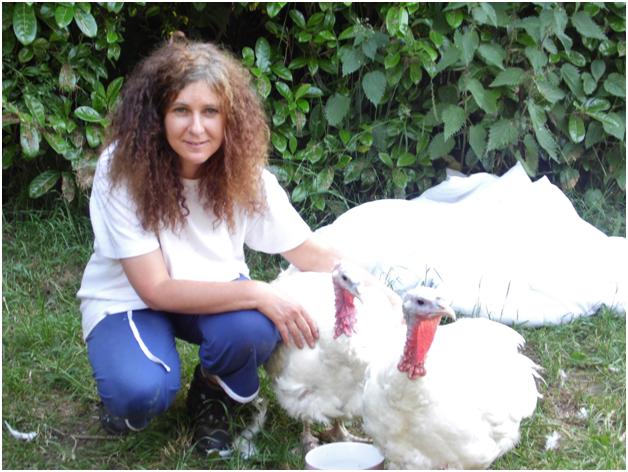 Sandra with Maeve and Marian

December saw the launch of a wonderful new book Turning Points in Compassion (eds Gypsy Wulff and Fran Chambers). Eden has contributed to two sections of the book which is available for purchase online, on Amazon and at The Book Depository. All proceeds from the sale of the book go to support sanctuaries including Eden. 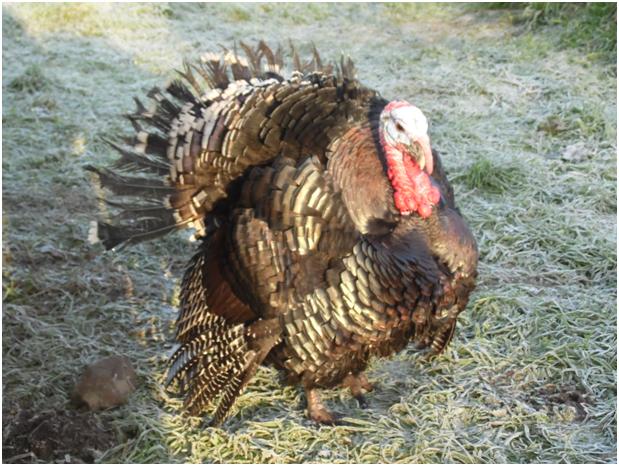 December also saw the rescue of some new residents to Eden. The geese are making friends with our resident goose, Marjorie, and Saoirse and Justin, Niamh and Aoife are still getting used to each other.

I recall a photograph on Facebook last Christmas, posted by a farmer. It was an apparently beautiful photograph of a large group of geese walking up a laneway, their white bodies in lovely contrast to the green, Irish countryside as they waddled, trustingly to the top of the lane. The caption on the photo read ‘the last walk’.

I often think of it when new residents are brought to Eden.

One of the most significant impacts on me in  my professional work as a psychologist, is the long lasting effects on humans of early trauma where someone’s control from them, and especially the long lasting and significant effects of betrayal trauma when someone is betrayed by the very people they trust and on whom they depend for their very survival. This trauma is not less when it is inflicted on a member of another species.

Never is our betrayal of the trust of farmed animals more noticeable than when we demonstrate our power over them by moving them against their wishes, or cajoling them to go where we want them. The night the turkeys (Justin, Niamh and Aoife) arrived at Eden prior to Christmas, they were crouched in a small car trailer with not enough room to stand up. They clung to the floor of the trailer in a desperate attempt to be left alone as they were taken from it, with no idea of their future fate. They struggled to regain their balance when they were taken out. They don’t like being carried but their struggles are useless against the bigger, more powerful humans who carry them. They have no option but to go where we take them. They have no choice in their fate. 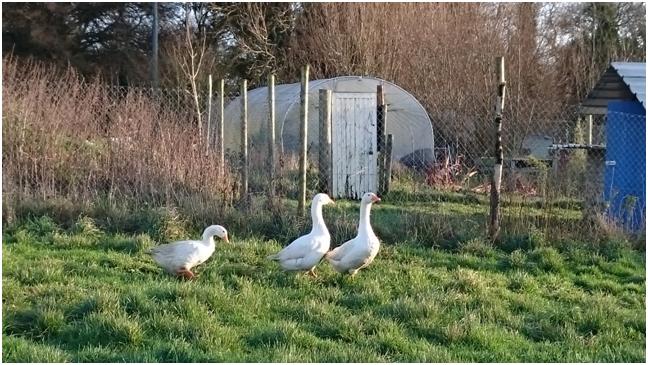 The recently rescued geese were quiet on the journey to Eden but very frightened and defensive on arrival when we attempted to move them, in the dark, into their new home. They hissed and attempted to fly, but their remonstrations were to no avail because we, as humans, have rendered their personality, their courage, and their will to survive secondary to our domination of them.

As newly rescued animals such as these are carried into Eden, I never fail to think that this journey could so easily carry them instead to their slaughter.

If you have become vegan you no longer play a deliberate causal role in the injustice perpetrated on other animals because they are not human. By begin vegan you have voted for a world that respects the right of everyone not to be owned, exploited, harmed or killed, regardless of species. If we claim to care about other animals then being vegan and advocating for their rights are the least we owe them. 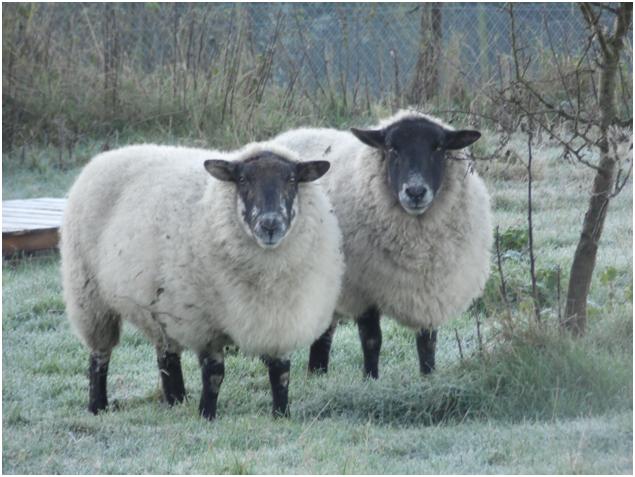 Thank you to the Friends of Eden

I would like to take this opportunity to thank those of you who support Eden by volunteering or doing an internship here, by donating to the cost of maintaining this home for its residents and helping us to rescue new residents, by donating in kind, by sharing our message of compassion and justice, or by simply keeping in touch and showing your support for our work.

If you would like to show your support by donating to the residents and work of Eden we still have a Matching Donations Campaign until the eve of 1st January during which time whatever amount you donate will be doubled by a compassionate benefactor.