Last Friday Saoirse followed me around the sanctuary whooping her annoyance because I was accompanied by a construction worker who was unfamiliar to her. She always brought a smile to my face as she expressed her displeasure at anyone unfamiliar encroaching on her home, sometimes by coming right up close to them, sticking her neck out and vocalising loudly, and other times stalking them threateningly from behind. She has even been know to give a painful peck if she really dislikes someone. 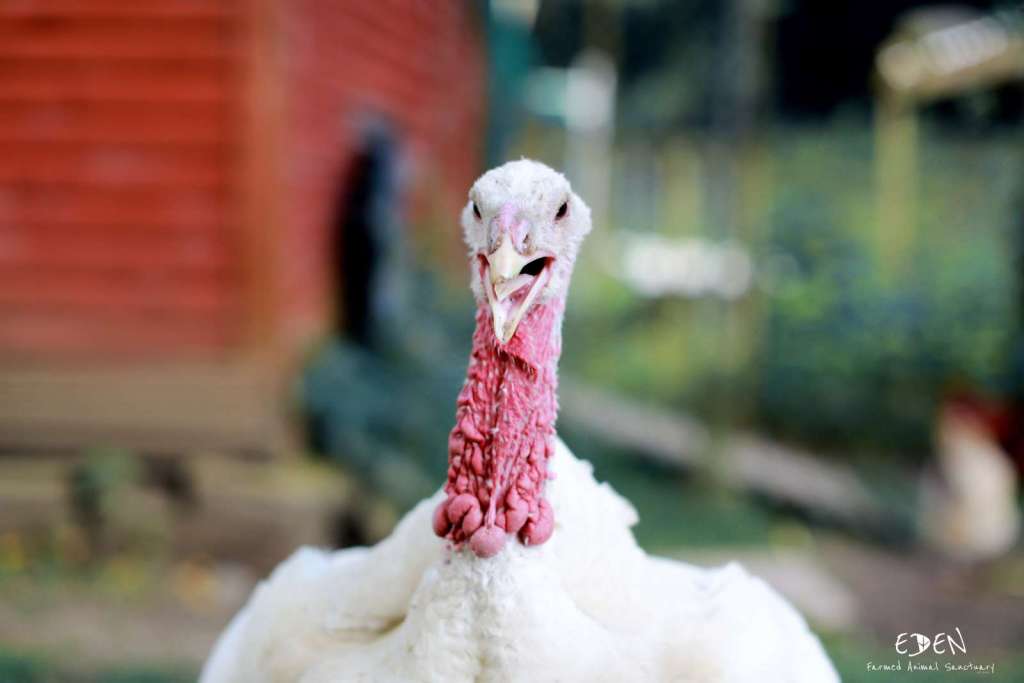 Her feet and knees had become swollen and for the last year she was limping on and off. She had managed with veterinary care and pain relief, but suddenly couldn’t stand and she had gone off her food. It would be wrong to leave her in severe pain. Given her age, her history of exploitation, and her heavy weight, it was unlikely that she could ever again enjoy a day free of pain. We made the decision to have her put to sleep. 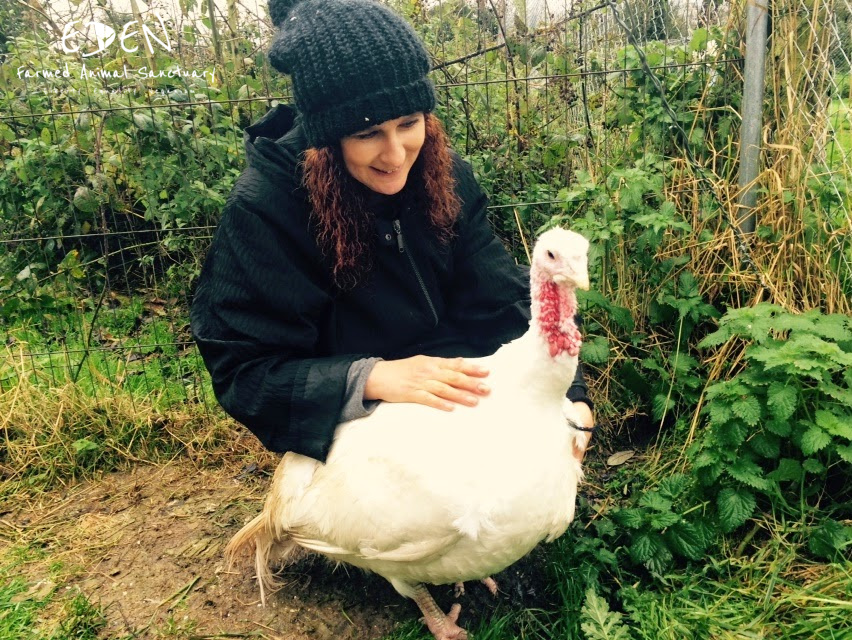 Saoirse (pronounced seer-sha) is the Irish word for freedom. She was rescued from a family who had bought her to kill her and eat her for Christmas dinner. When the time came, the children in the house were not able to bring themselves to allow their parents to kill her. And so she lived until the following September when she was advertised for sale ‘for breeding’.

With a little education and persuasion, the family agreed to give her to Eden. I remember so well her first days with us: she used to watch Ronnie as he worked on the roof of our shed and we would hear her beautiful voice rippling and trilling all over the sanctuary as she called up to him. 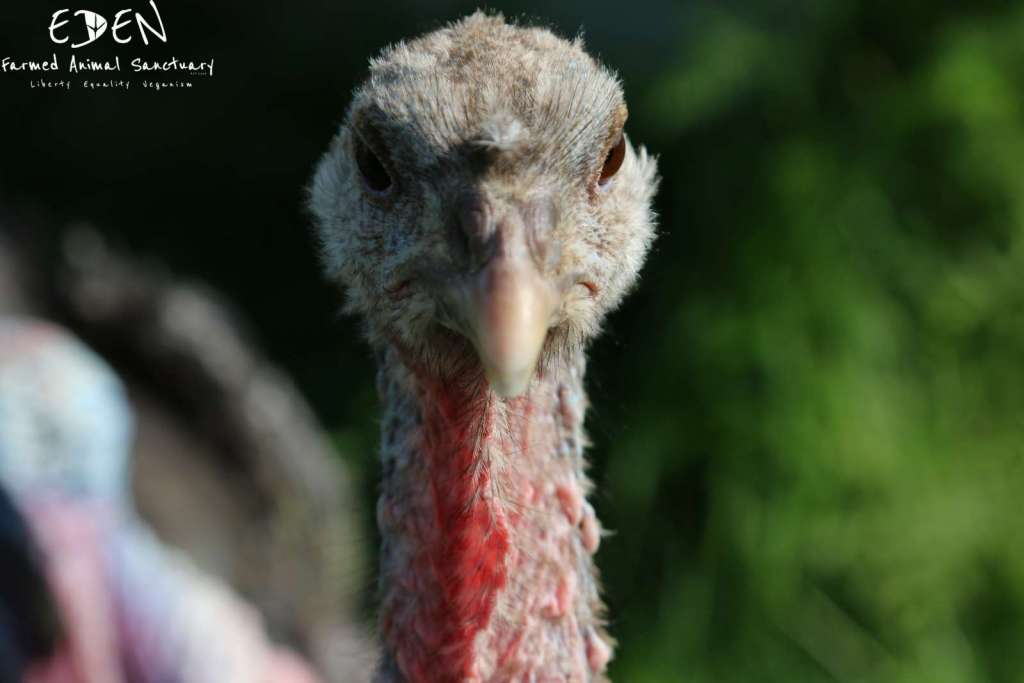 We don’t know Saoirse’s full history but I recognised similar behavioural patters to those exhibited by people who have been diagnosed with borderline personality disorder and who have a history of repeated trauma. Her levels of agitation in her early days with us were painful to watch: it was terrible to know that she wasn’t at peace. Even as she adjusted to her life on a vegan sanctuary, she often wanted to love and attack at the same time. She found it difficult to get on with other turkeys so most of the time she lived with chickens, geese, and ducks. 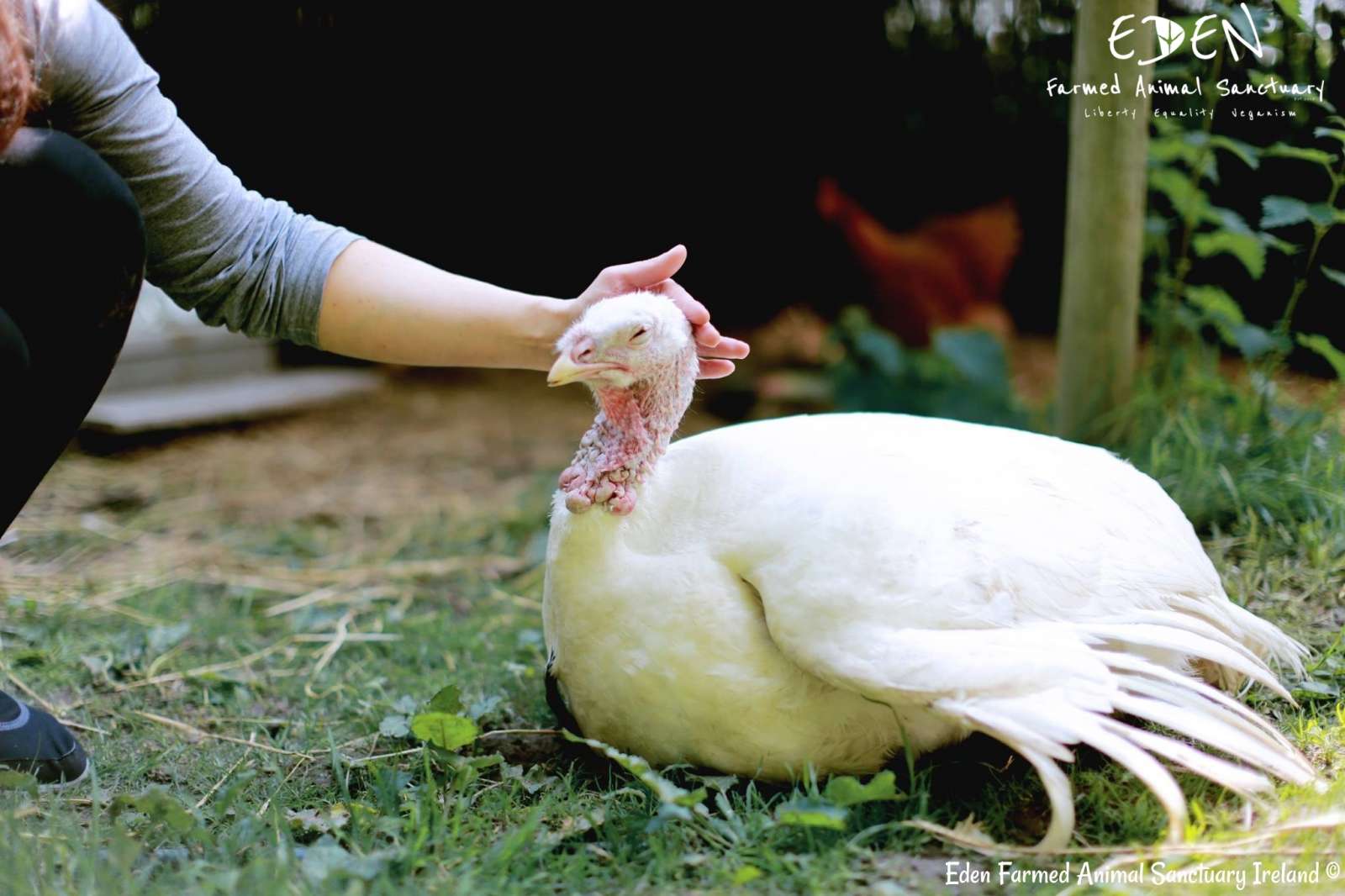 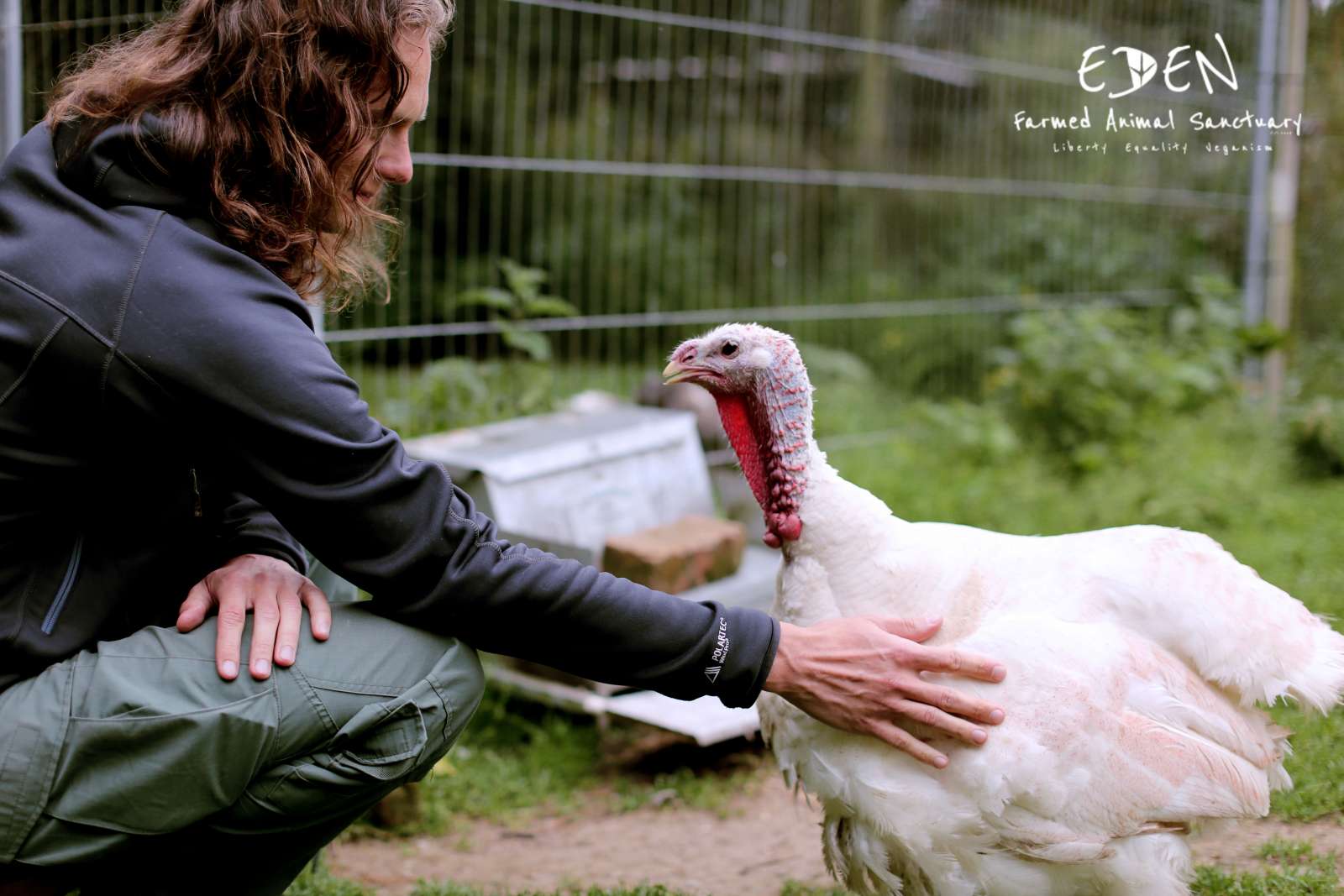 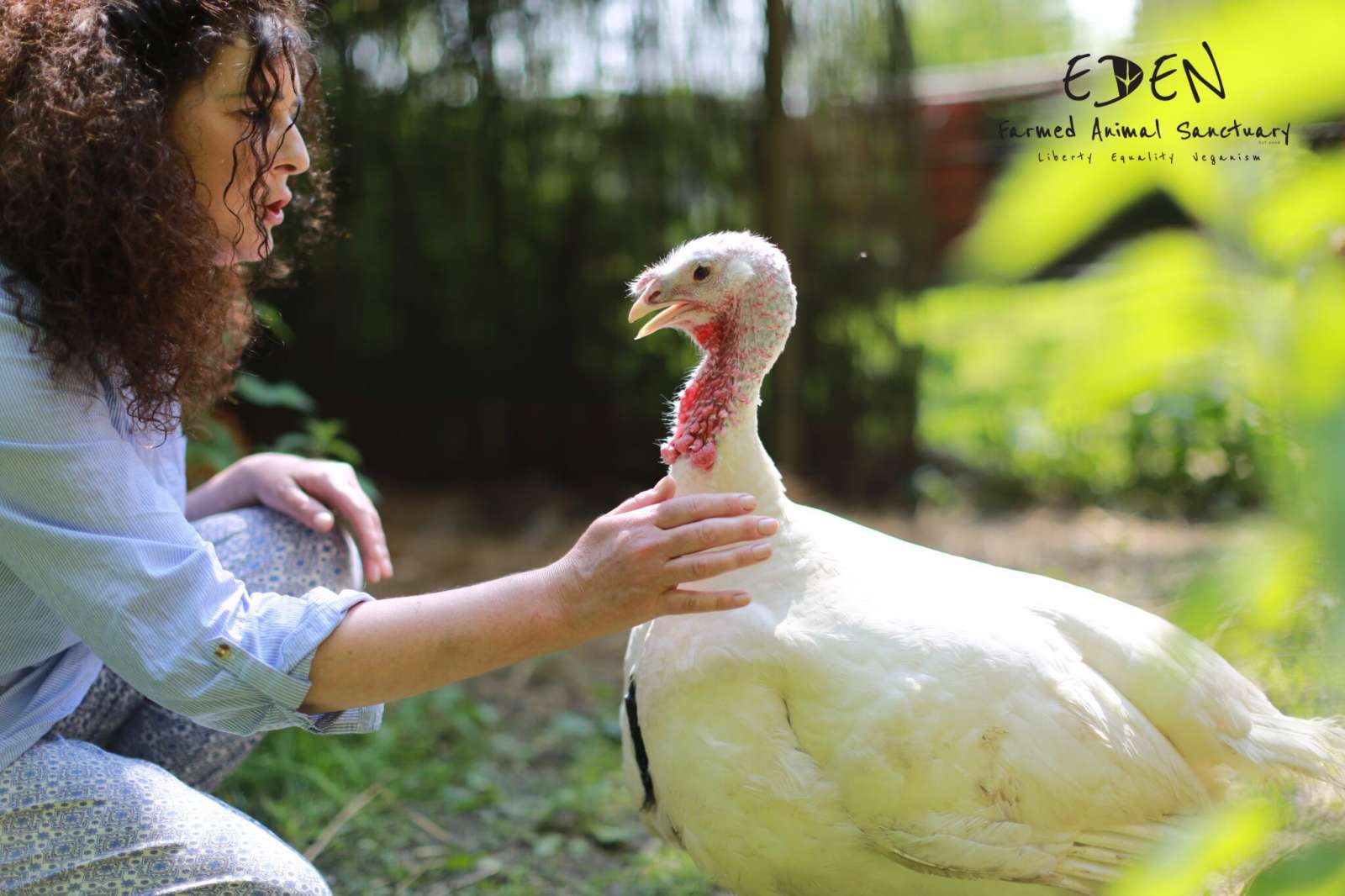 For the last few years she has been at her most peaceful. She knew we loved her and spoiled her and she could smell a treat a mile away, even if it was intended for someone else. 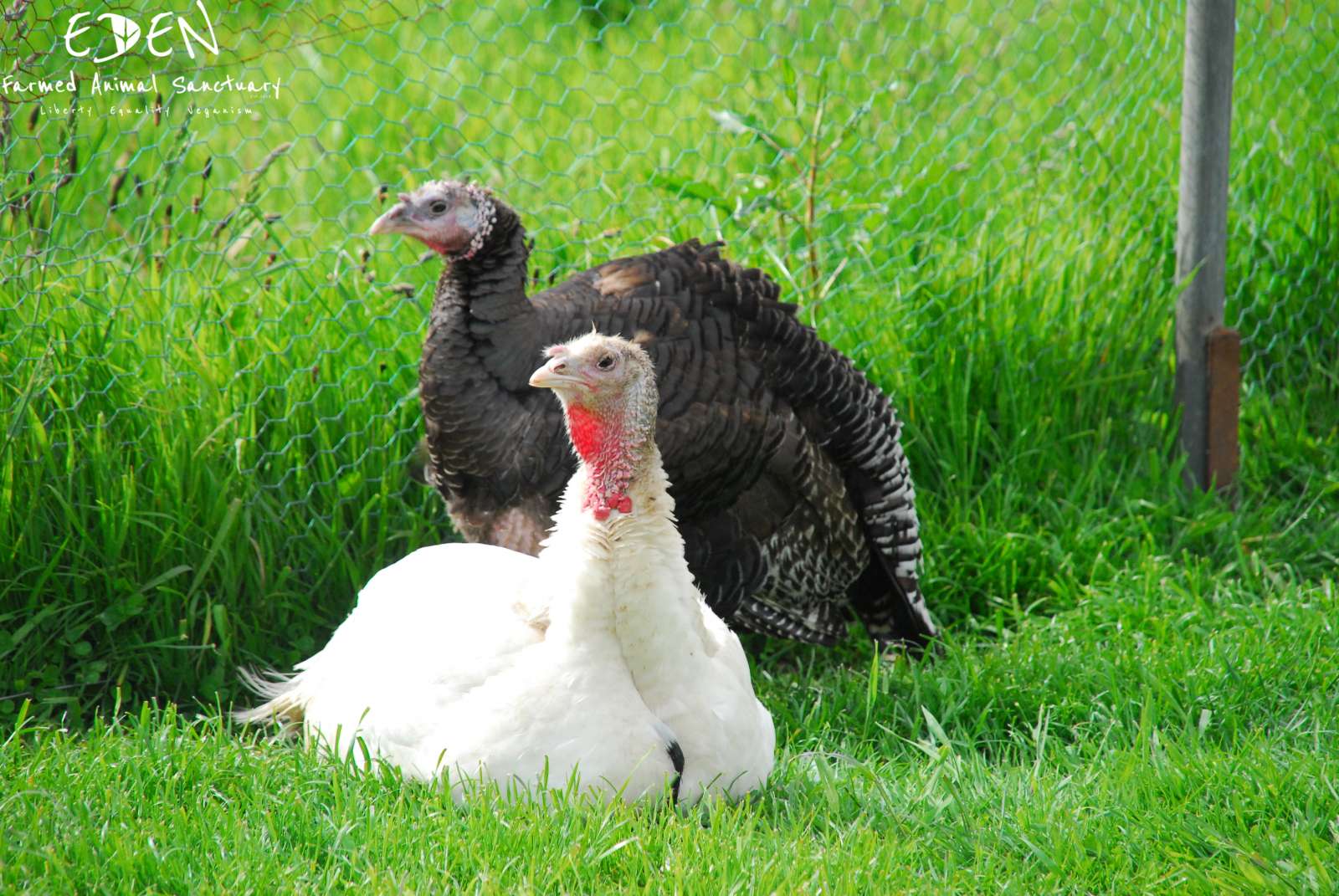 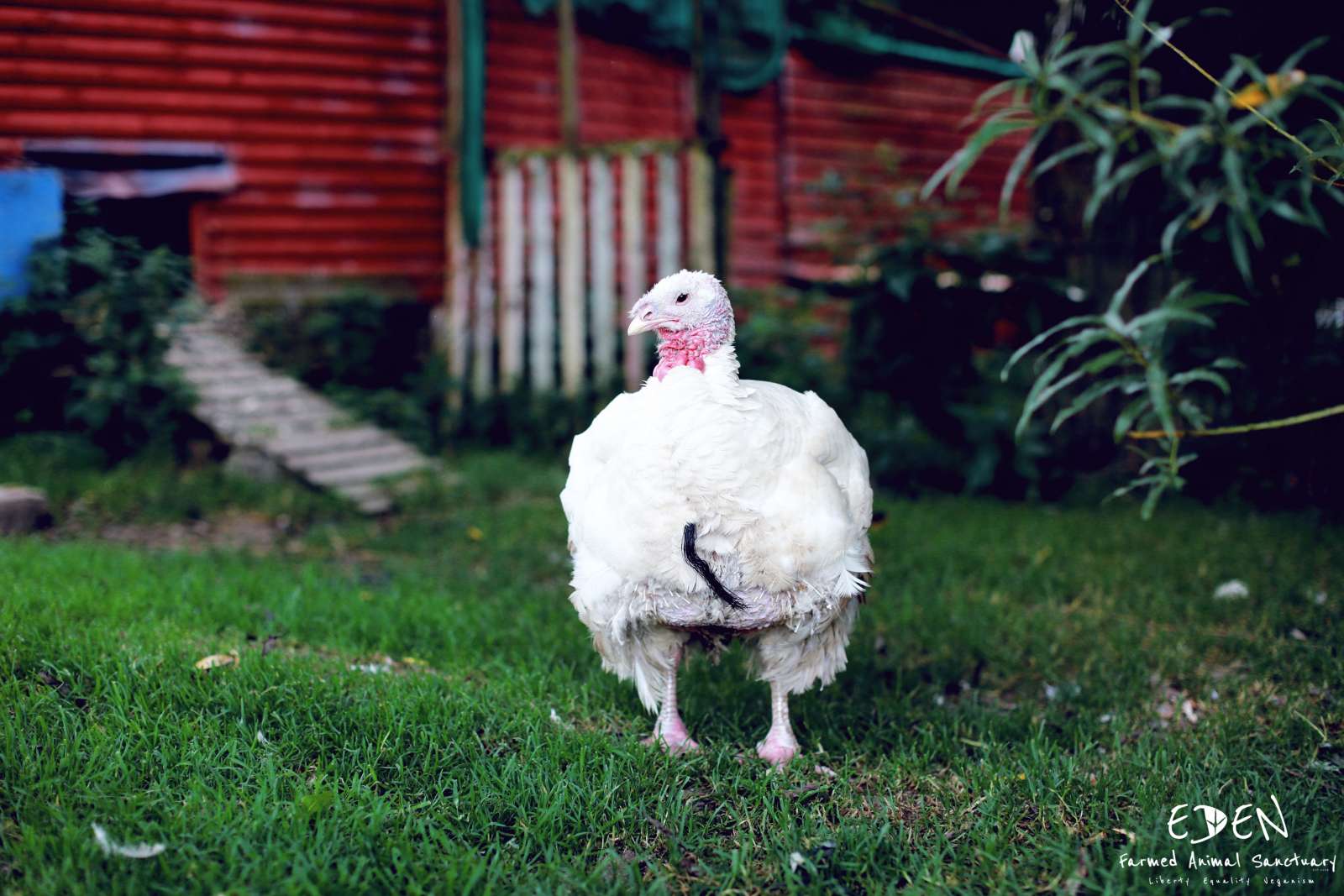 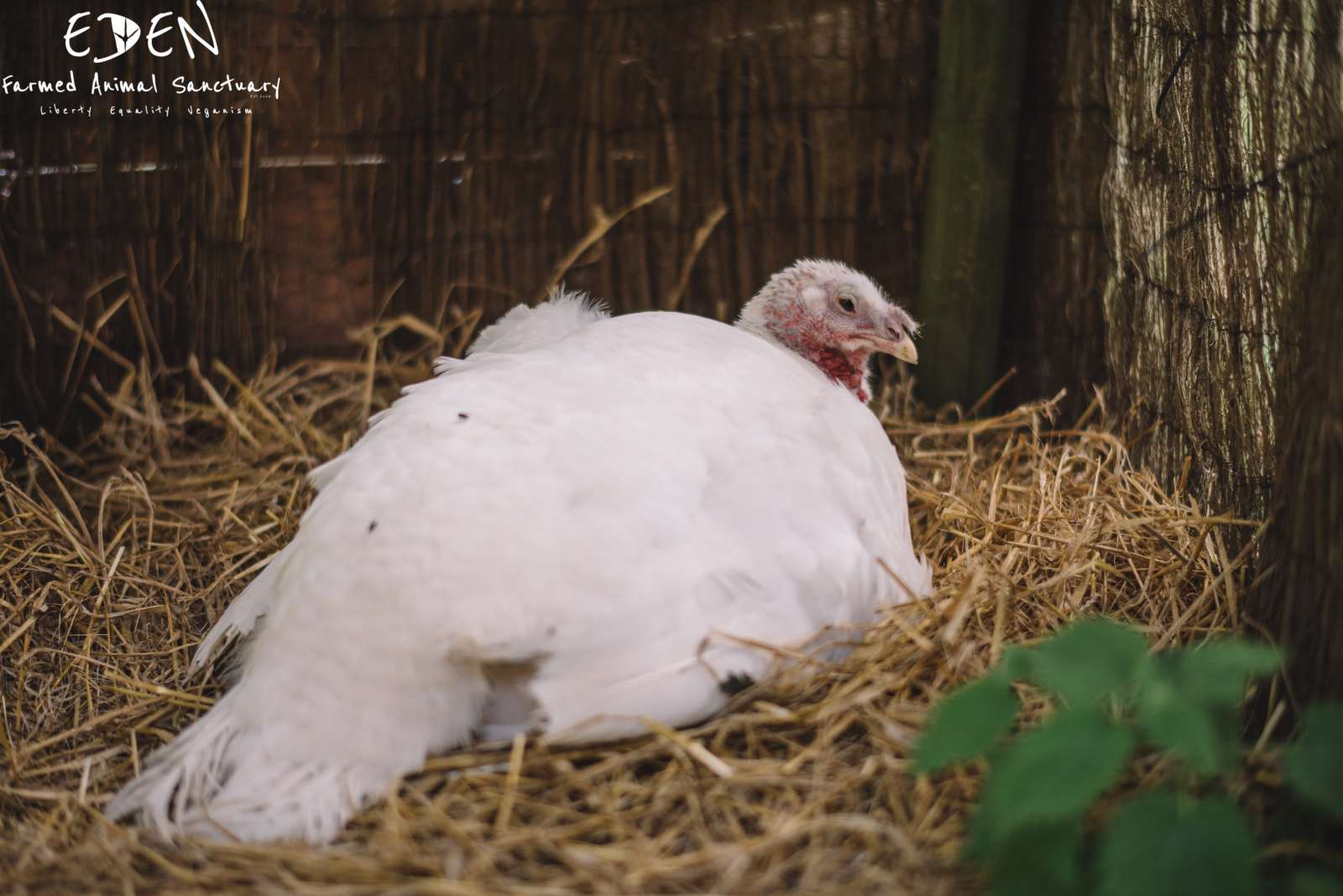 The sanctuary will be quiet without Saoirse tomorrow. We will miss this very feisty, deeply affectionate, loud, complex, interesting, and beautiful turkey. 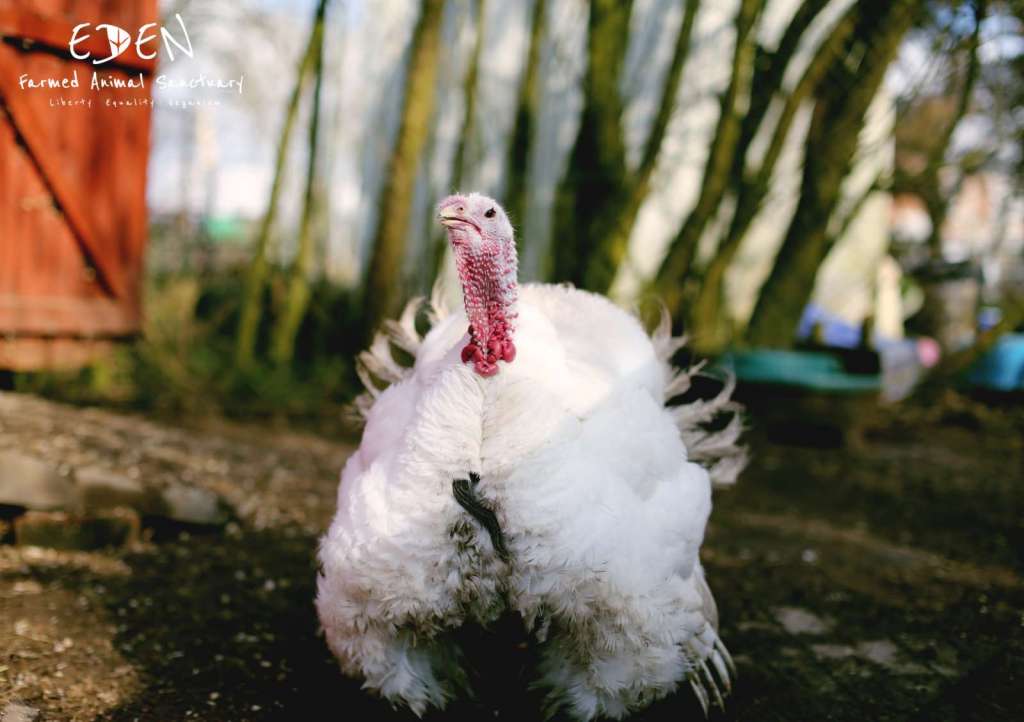 Despite living at a vegan sanctuary and her courage to overcome her past, Saoirse has died a victim of the Irish ‘turkey flesh’ industry. The levels of pain that made her life too unbearable to continue living are attributable to selective breeding for abnormally large amounts of muscle tissue which affect the joints of turkeys, causing a range of extremely painful skeletal conditions.

Almost a million turkeys are slaughtered in Ireland every year. Each of them is a unique individual like Saoirse, with a personality, history, preferences, emotions, and a life that has meaning and value to them.

Many of them suffer the same skeletal problems as Saoirse. Unlike her they do not receive pain relief. There is no one to put them into a comfortable dry house, with food, treats and water close by in case they are in too much pain to move. No one recognises who they are. Instead of being seen as exquisitely sensitive, intelligent, affectionate, feeling beings, they are regarded as commodities, ingredients, and products who matter only insofar as they are profitable for those who exploit them.

The day they are slaughtered they are suspended upside down by their legs as they move towards the slaughterer’s knife. A significant percentage of them hang by their arthritic, dislocated and broken bones before losing their one and only precious life, and they do so because someone has gone into a shop or restaurant or canteen and handed over their money for ‘turkey flesh’.

I used to be that person who paid for a ‘turkey’ sandwich without ever thinking about the cascade of events that I was setting in motion for a sentient individual somewhere to be bred into a life of misery with a death sentence on their young head to meet the demand I created. Year after year, I paid for a turkey to be killed at Christmas with no thought for anyone but the human family and friends for whom I would cook on Christmas day. But now that I have been given the privilege of knowing who they are, I could no more take the life of a turkey than I could take the life of another human. That is what it means to be vegan: it is the simple recognition that species membership does not justify exploitation and death: that their lives matter to them and that they are not ours to own, use or kill. 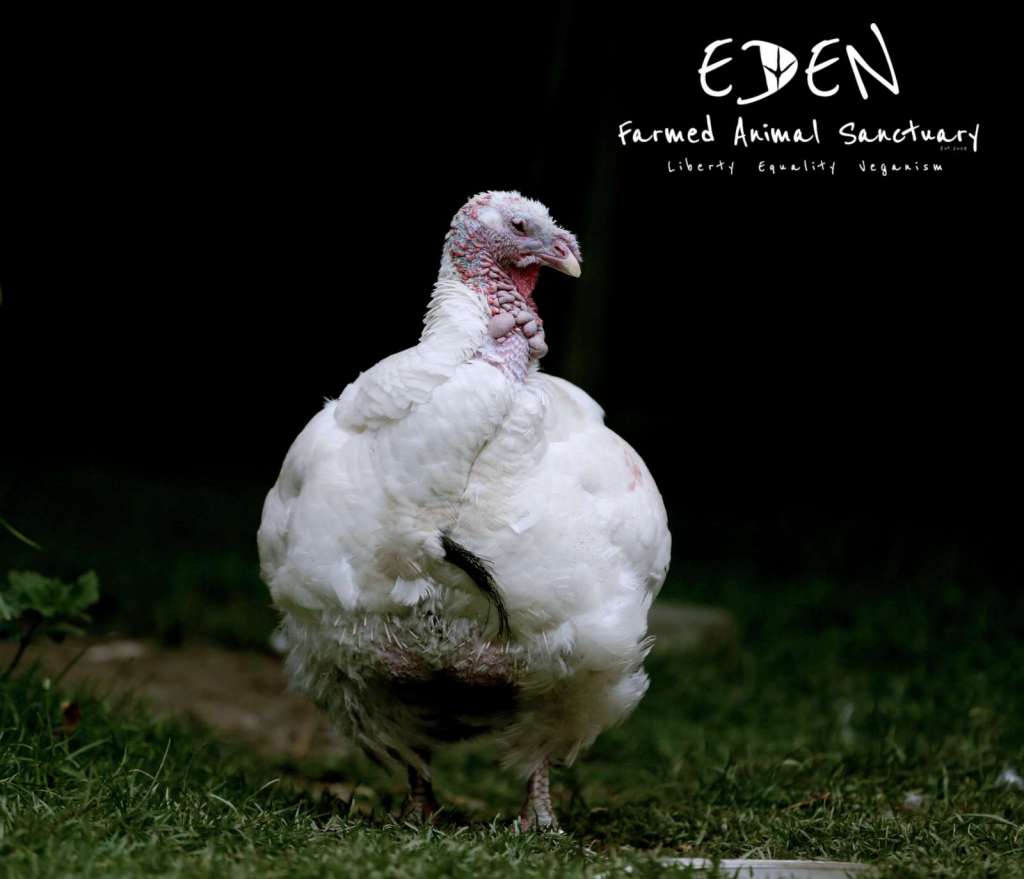