Saoirse: Help us to Help Them, Matching Donations Campaign 2014

Saoirse was purchased in 2013 by an Irish family with young children for the purpose of rearing her to kill for Christmas dinner.

At Christmas they found themselves unable to kill her. Instead, they purchased a turkey who had been killed by someone else. Saoirse was permitted to stay alive but her quality of life in a very small pen with a large group of chickens was very poor.

When the relationship between Saoirse and the chickens deteriorated, as a consequence of competition for food and physical space, and probably from lack of appropriate conspecific relationships, the family attempted to sell her, advertising her as “suitable for breeding”. If Saoirse had been sold to someone who also had a heavy male turkey, she would have endured a life of unimaginable pain from the injuries he would inadvertently have inflicted on her due to the awkwardness of his attempts to mount her due to his weight and size, combined with her poor joint and bone condition, which she will suffer in common with all turkeys bred for human consumption.

Instead of selling Saoirse, the family was persuaded to allow her to come to live at Eden without profiting financially from the interaction.

Saoirse had a voracious appetite on arrival at Eden. Turkeys like Saoirse who are bred to gain weight for human consumption have large appetites anyway but to compound the problem prior neglect to treat for internal parasites very probably heightened her experiential sense of hunger. Fear of hunger and a habituated sense of competition for scarce resources resulted in her attempts to dominate the other residents at Eden. She found it very difficult to form harmonious relations in the sanctuary. For the safety of the other residents, as well as her own wellbeing, she had to live alone.

Anyone with an unfortunate start in life benefits from consistent, regular care, kindness and unconditional love. Repeatedly meeting their needs in a consistent manner enables them to trust that their physical and emotional needs can be met. This reduces the sense of constant alertness for threat and it also calms fears, such as the fear of scarcity of resources. It teaches them to have a sense of self that is self-efficacious in that their interactions with others will elicit what they need to fulfil their basic needs for food, shelter, and social interaction. The distress at unfulfilled needs and the fear of abandonment gradually abates. This is true of humans who have had unfortunate, traumatising life experiences that interfere with their social sense of themselves in the world. It was equally true of Saoirse and her sense of herself as a person in this world.

Her initial behaviour towards me as her sole caregiver alternated between attention and affection seeking, and forceful shows of distress and irritation. When our volunteer, Clara, joined us, she had a similar experience. Saoirse was initially mistrustful but like traumatised or abused children, she negotiated the complex emotional and cognitive process of overcoming mistrust of the person on whom she depended for her daily needs for water, food, protection and shelter: this is not an easy mental feat. Saoirse’s behaviour appeared to me to be characteristic of people who have insecure attachments with their primary caregivers and who express displeasure and distress at abandonment and reunion. Saoirse was deprived of her right in life to a secure attachment relationship with her birth mother. Her early life experiences in an inappropriate and possibly abuse environment account for her initial social difficulties at Eden.

Every being has an innate propensity to heal. It was not long before Saoirse’s deep need for love and social interaction was prominent and, like all the turkeys we have ever known at Eden, she was enjoying the close, affectionate contact of a turkey hug. However, for some time, even in the safety of a loving embrace, she would flinch and jerk her head away from my hand as if in a learned response to feeling pain rather than love. With time she began to experience social interaction that was secure, calm and pleasurable in contrast to her earlier competitive and harmful interactions.

Yet, it was a worry that her constant desire for companionship was only fulfilled for her by human contact. She remained suspicious of the other sanctuary residents. Her loneliness preyed on my mind as I desperately sought an opportunity to rescue someone she would accept as a friend and companion.

Saoirse is a white turkey bred to be clinically obese for human consumption. Like obese humans her future health will be severely compromised by her weight. For this reason, it is usually highly recommended that white female turkeys are never in the presence of males whose weight during sex could injure them. Nevertheless, in Saoirse’s case, the best solution I could come up with, in consultation with expert sanctuary veterinary staff such as Jamie London (ex Animal Place) and with Clara at Eden, was a light, small sized male turkey. 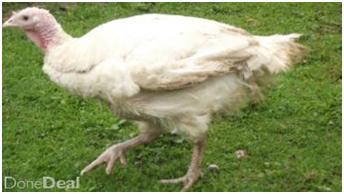 Figure 2 The advertisement for sale of Saoirse 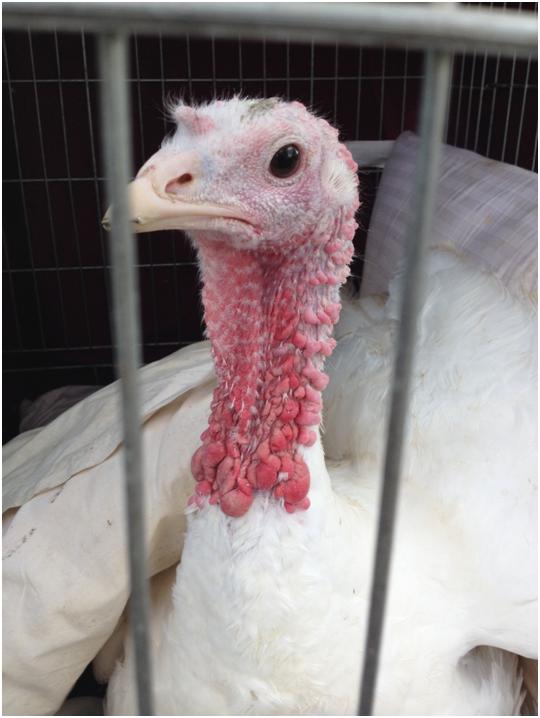 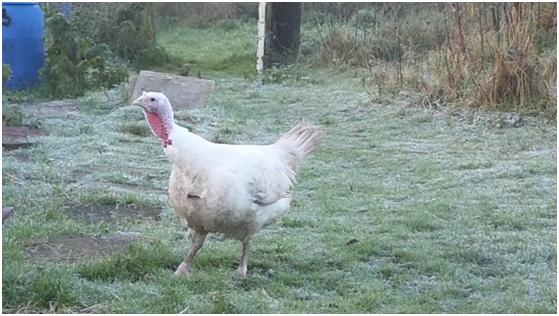 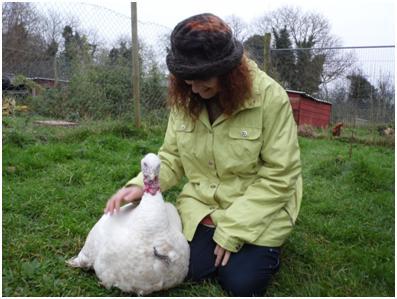 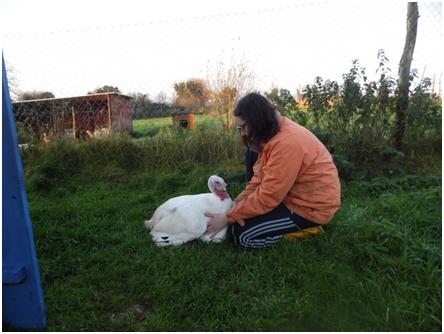 And so Eden was able to offer a home to Justin.

While we had the opportunity we also succeeded in rescuing his friends, Aoife and Niamh. They are five months old. Their lives were spared by a young boy who had hoped to profit from their deaths and was persuaded instead to liberate them to the care of Eden.

We hoped that a male turkey would be the ideal companion for Saoirse, but we doubted that she would get on well with other turkey hens. How little we understand other animals, despite our best efforts. To our great surprise and delight Saoirse greatly welcomed their company. In this video you can see how Justin spends all day displaying to Saoirse in the hope of winning her affections but so far she has remained quite aloof. The video also shows how Saoirse still prefers human affection. We trust that in time she will have healed sufficiently to choose for herself who best meets her need for companionship, affection and love.

If Saoirse was human she would have run the risk of a psychiatric diagnosis such as borderline personality disorder, the signs of which are indicative of the hurt caused by harmful social relations. Like humans who have been hurt in life, Saoirse has the capacity to heal given the right conditions. The ideal conditions for people like Saoirse are in a vegan world. In the meantime, the conditions of a sanctuary are the best available to her. Those of us who are able have a social responsibility to help provide conditions of healing for those who need them. Everyone one of us will someday need conditions in which we ourselves can heal.

I do not take credit for the residents’ healing. They do that all by themselves. All I do is strive to provide the best possible conditions to facilitate their recovery and allow them to enjoy the very short lifespans that we have ensured by breeding them for our use. The conditions they need include spacious grassland, housing and protective fencing, food, ponds to swim in, shelters from the weather, places to dust bathe, health care such as vitamins, minerals, and supplements. Sick residents require heat, transport to the vet, medical investigations and treatment. At some stage in their lives, all of them require special housing and hospital care.

Eden relies on your donations to give this care and to be able to rescue and provide a home for new residents. The more Eden receives in donations the more lives I can rescue and welcome to their home at Eden.

A generous donor will match all donations to Eden between now and the last day of 2014. Please give generously knowing that your gift enables someone else to live their life.

To donate please use the Pay Pal button on our website https://www.edenfarmanimalsanctuary.com/donate/ or contact us for details of how you can make a lodgement to the resident’s bank account. 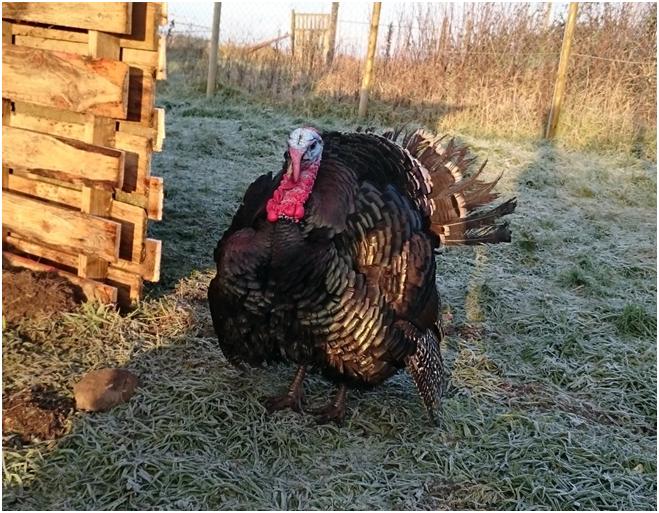 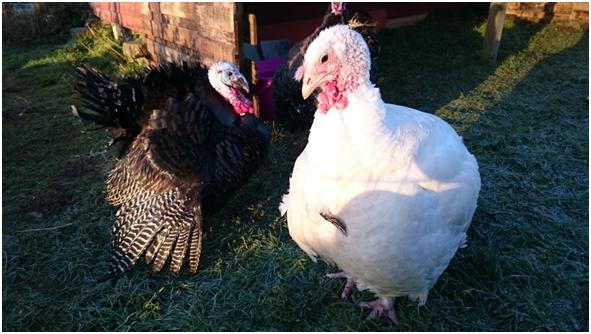