Saturday, May 4 is International Respect for Chickens Day which originates in the work of Karen Davis, PhD and United Poultry Concerns. It is the beginning of a month-long recognition of the most oppressed land animal on the planet.  Of the 70 billion land animals killed unnecessarily by humans every year, 66 billion are chickens.

So, today I would like to discuss respect for chickens by telling you Fairy’s story. She arrived at Eden in the hot summer of 2018. She was rescued when she arrived at someone’s house as a tiny chick in the mouth of a cat. She was badly injured, and it is a miracle she was not killed. The following day the same cat arrived with one of her siblings who was dead. No one was able to follow the cat and so Fairy is the only one of her family who was brought to safety. 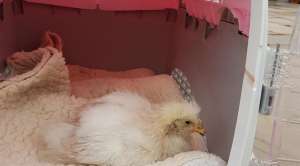 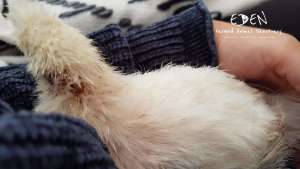 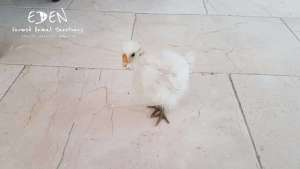 She had bloody scars on her neck and her foot was hurt.

She very obviously needed a mother and that is the role we are privileged to play to those in our care at Eden. She imprinted on me and became very attached. Like any vulnerable child, she needed the security of someone who cared for her and met her basic needs, as well as her need for comfort and safety. Like countless residents before her, that care provided the scaffolding from which her personality could develop and from which she could explore the world and heal. 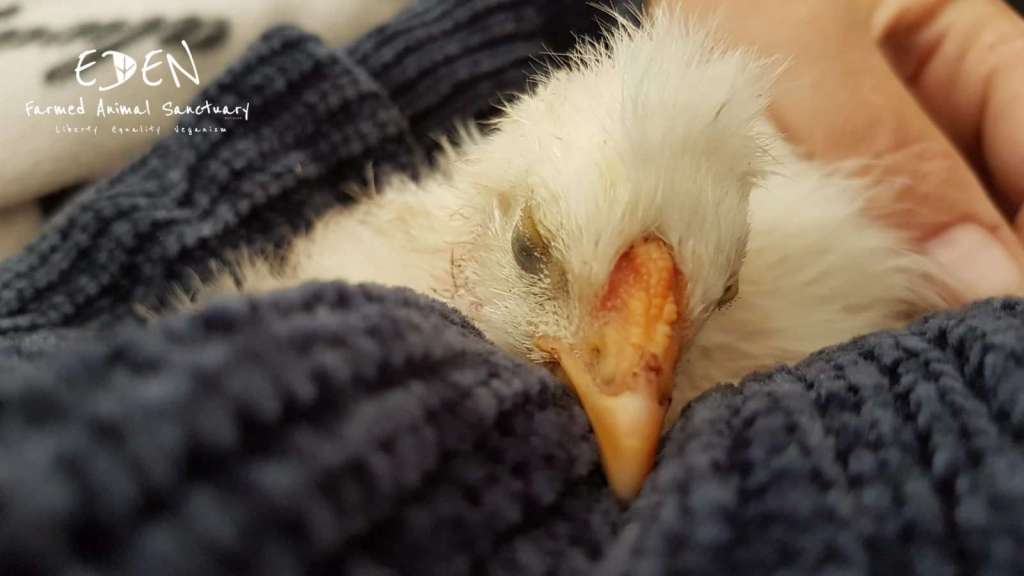 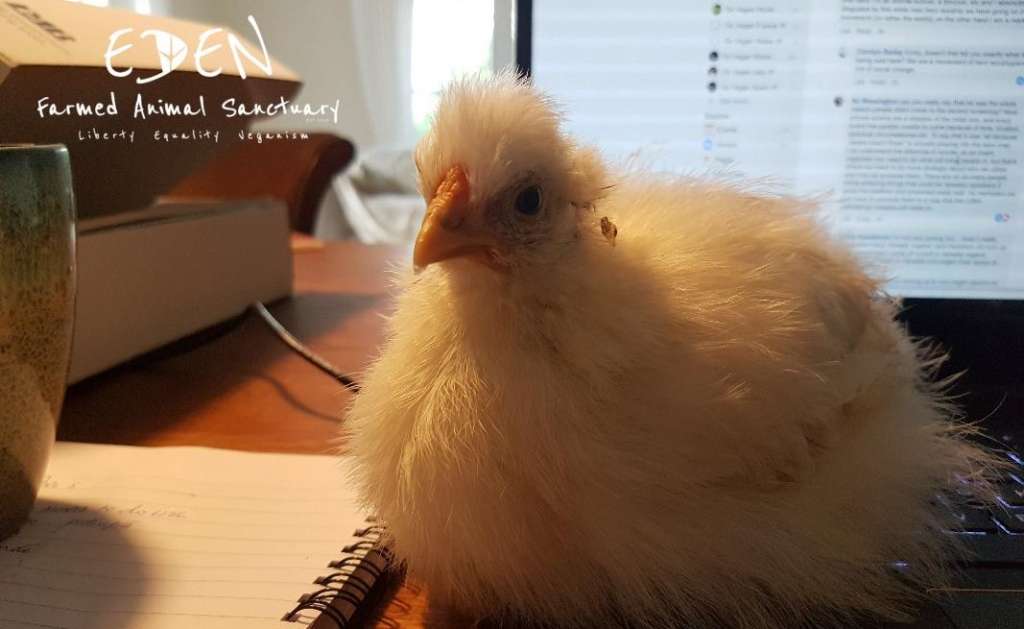 From the first time I met her, Fairy has never stopped chatting. She was so excited when we found Blossom was rescued from a chick breeding programme and became her companion. This video was taken minutes after she met Blossom and it shows how Fairy, a mere baby herself, looked after Blossom and the fun they had together every day when they were tiny little beings.

Today she is still Blossom’s protector and companion, even though she is a much smaller chicken. 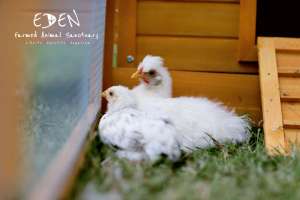 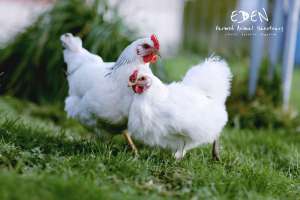 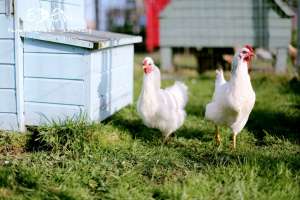 Fairy is one of the most gregarious hens at Eden. When she sees me, she runs at top speed to me for a hug. She is a deeply affectionate hen, with such a brave, strong and lovely personality. She brings absolute joy to the lives of everyone who knows her.

As a result, she was the inspiration behind this ad run by our Go Vegan World campaign last year to attempt to bring clarity to the confusion that is currently promoted in the media (and by some animal advocates) about what it means to be vegan. 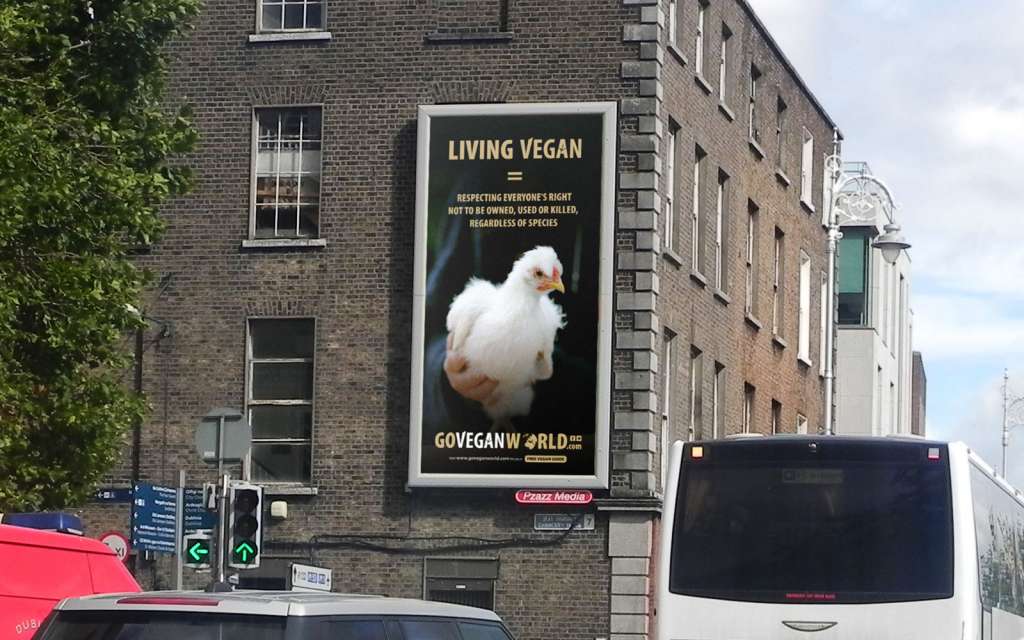 People jeer at those of us who deeply respect chickens and have close relationships with them. But it is not us who are pitiful. It is not us who lack evidence of the reality[i], science[ii] and sentience[iii].

Before I went vegan I used to consume eggs and chicken’s flesh. If I had known the harm[iv] I was causing I would never have done so [v] [vi]. If I had had to kill one of them in order to eat her, I would not have been able to do so. I wish I had thought about what I was doing. I wish someone had told me. I wish there had been more information available on the reasons to be vegan. I wish I had seen chickens for who they are.

When I saw this deeply disrespectful graffiti on our ad which juxtaposes the beautiful, innocent sentience of Fairy whose very life is in our hands, with the violent commodification of her in the phrase ‘I taste like chicken’, my overriding reaction was to feel sorry for the people who felt the need to deface our work with this message. It is so full of hate and disdain for someone who is so precious. They will probably never know how right it feels to be vegan and respect the rights of another being even though they are different to us. They will never know  the joyful experience of knowing Fairy which has brought us infinitely more pleasure than any taste of flesh ever could. 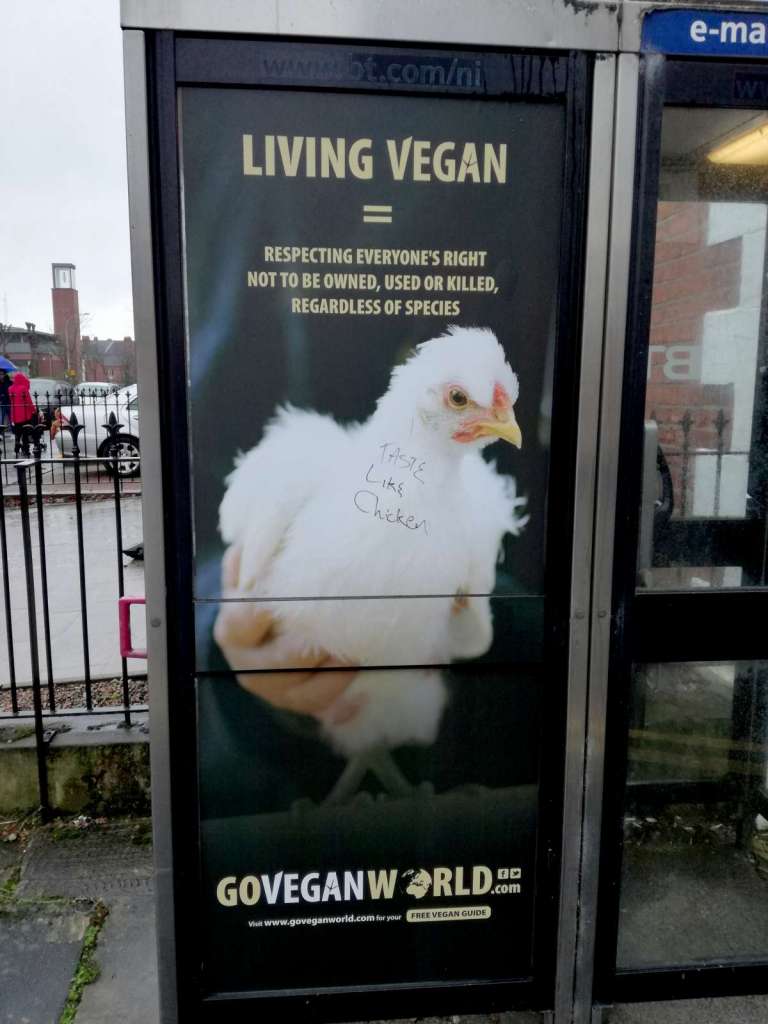 Fairy is such a tiny little person. Under her fluffy white silkie feathers, she had the smallest, most fragile body. To use her for eggs or flesh entails harming both her charming, innocent personhood and her defenceless little body in the most violent possible manner. We are privileged to know her and to have her in our lives and we will treasure every day that she is with us. The people who destroyed our ad are cowards and bullies. But they are not more so than any of us who as non-vegans consume chickens’ eggs and flesh. 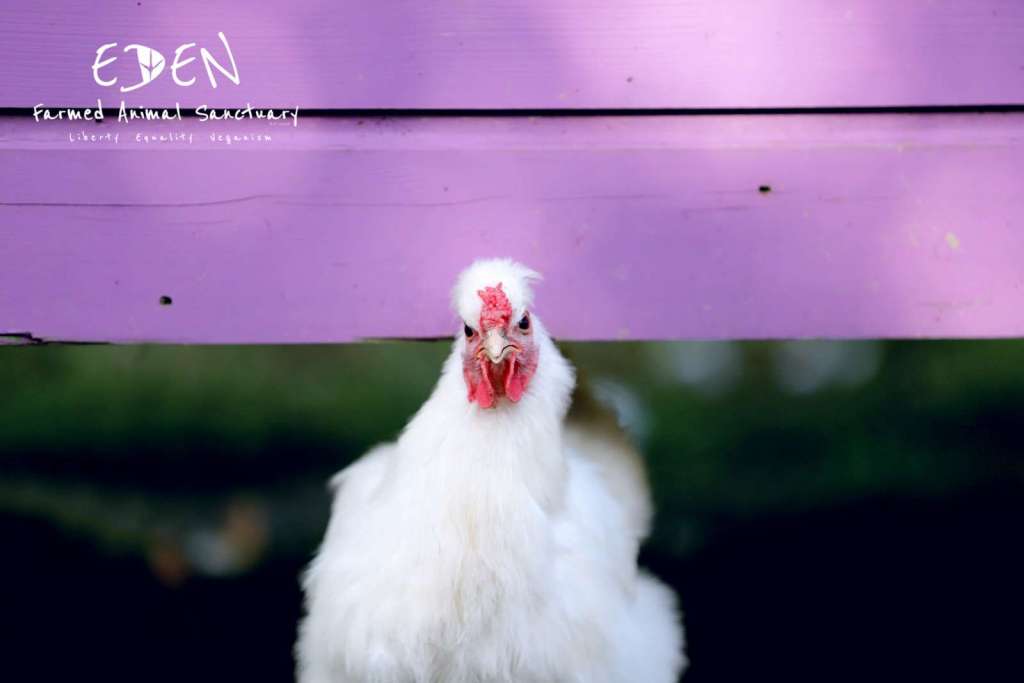 Most people love Fairy when they meet her. Those same people who love Fairy turn away in disgust and fear from visual depictions of the harm we inflict on hens when we breed and use them for their eggs; or when we witness them shackled by their feet, dipped into electrified water and their throats being cut so we can eat their flesh; or when we witness or learn about their day old brothers being gassed or minced alive because they don’t lay eggs. 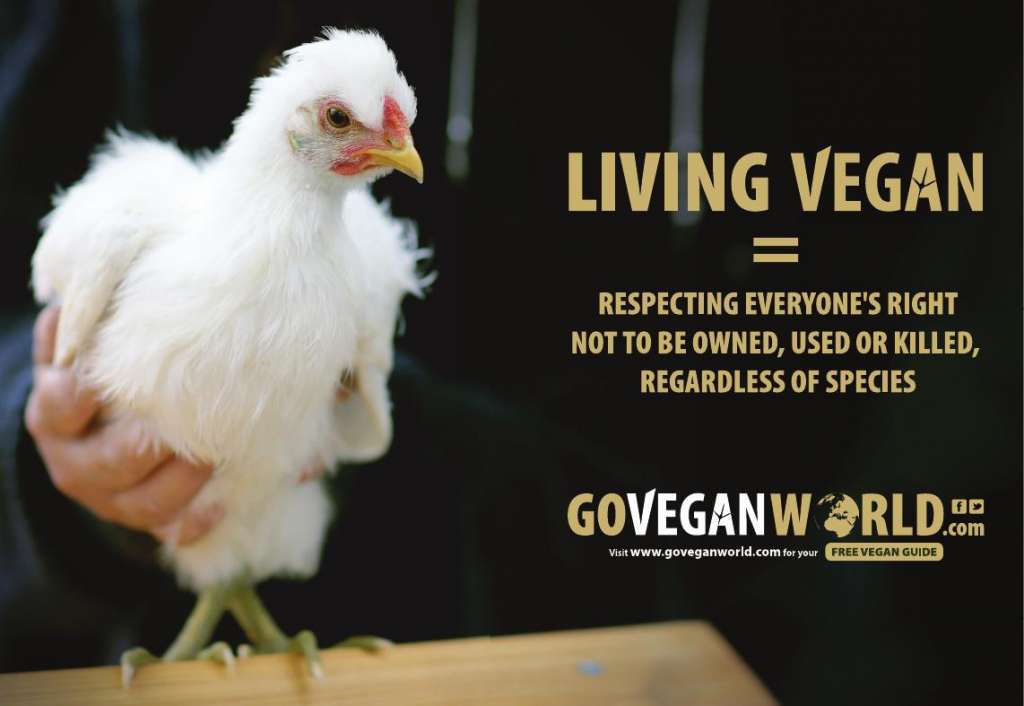 So today, on International Respect for Chickens day, I hope that readers will enjoy these photos and videos of Fairy whose courage to survive her experience of violent attack was enabled only because of the existence of a vegan sanctuary. She represents 66 billion chickens who non-vegans pay to be exploited and killed every year. Each of them is as deserving of respect as Fairy and the only way to respect the is to stop using them and be vegan.