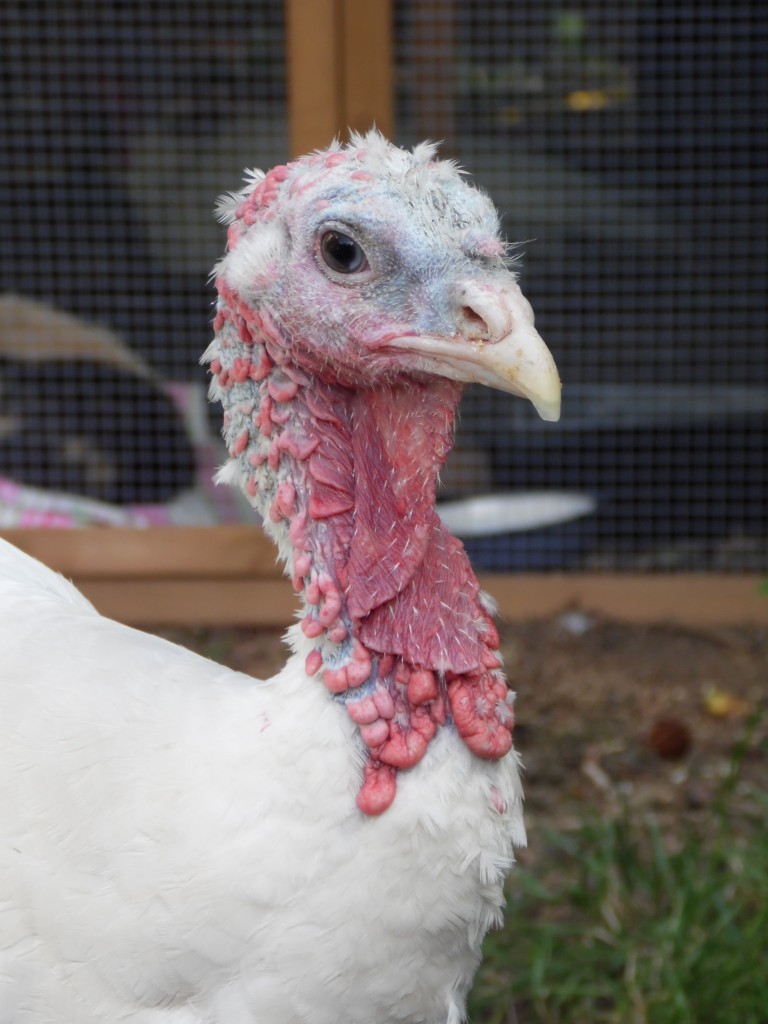 It is with the heaviest of hearts that I bring news of the death of Marian, star of the movie You Haven’t Lived Until You’ve Hugged a Turkey.

Marian had progressive arthritis, characteristic of turkeys and other birds who are reared for ‘meat’. In Marian’s case she was reared to be very overweight in order to provide Christmas dinner to humans. We rescued her before Christmas in 2010. Although she had a lovely life at Eden, she was plagued from the beginning by her obese body. 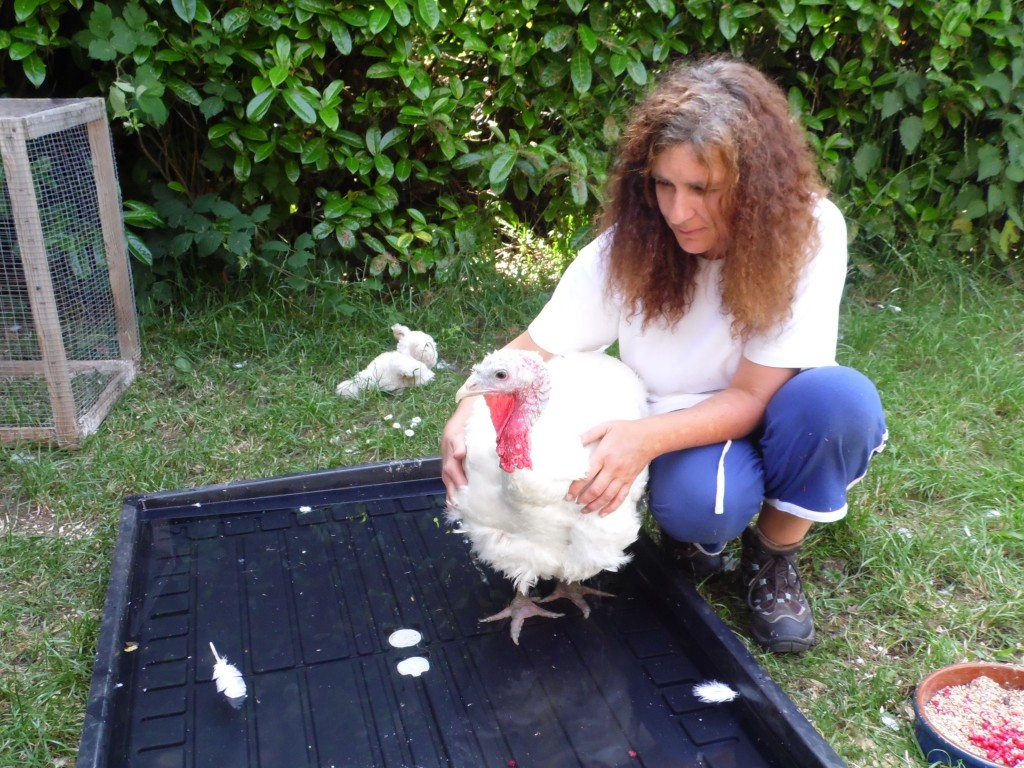 To meet the demand for meat, and particularly the demand for the excess that accompanies celebrations at Christmas, turkeys are selectively bred to produce as much body tissue as possible, in as short a time as possible. Wild turkeys weigh between 4 and 10 kilos in adulthood. Marian, like the other 650 million turkeys who are bred to be slaughtered every year, weighed 12 kilos, far in excess of her skeletal capacity. Her skeleton could not support her weight and she gradually developed more and more of the skeletal diseases common in turkeys. Her feet had large, painful arthritic lumps from a young age. In recent times she began limping and becoming increasingly less active. She was on a constant regime of medication. X-ray revealed arthritis in her hip that was inoperable. Her face had visibly aged and deterioration was very rapid. When she was struggled despite pain relief and could no longer leave her house in the morning, or go to bed by herself at night, step into her foot bath alone, or go from a sitting to a standing position without using her wings to balance her body, and when running to greet us, or have dustbaths were no longer an option for her, it was obvious that she did not have the quality of life that we have promised her when we rescued her. 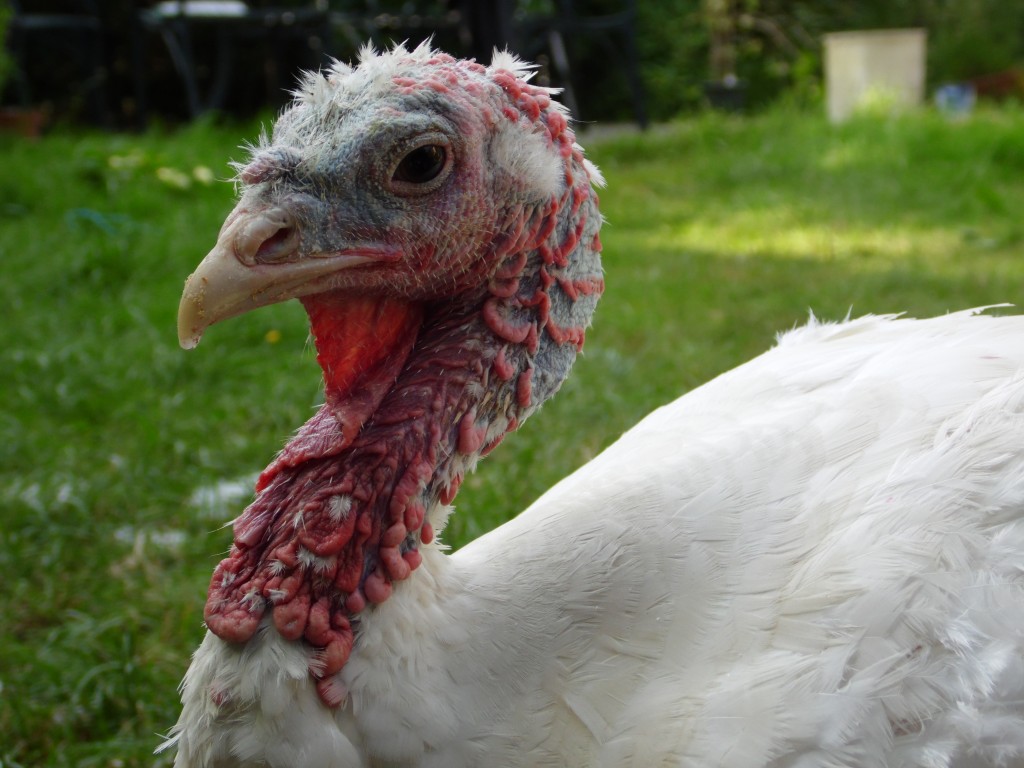 On her last day at Eden she stayed in the shade with Maeve, her companion since birth. 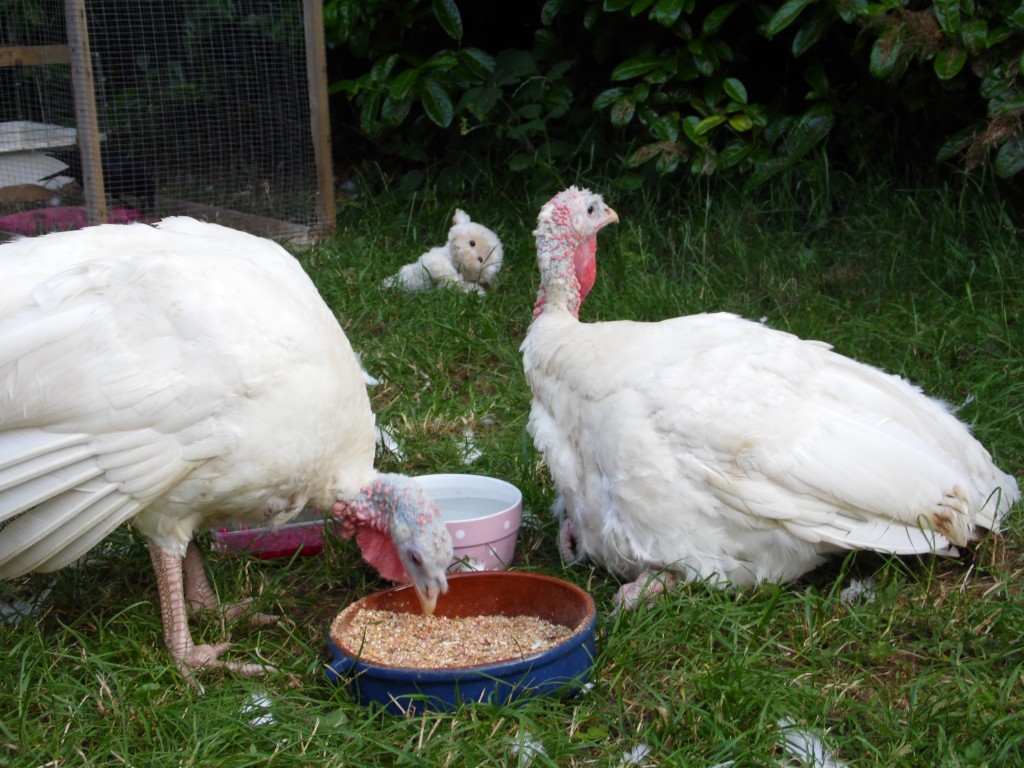 She spent most of the day standing in her cooling footbath that went some way towards alleviating the discomfort of the unusually hot Irish weather. She ate very well and we kept her supplied with her favourite items: the raspberries, strawberries and redcurrants that had ripened so early at Eden this year. 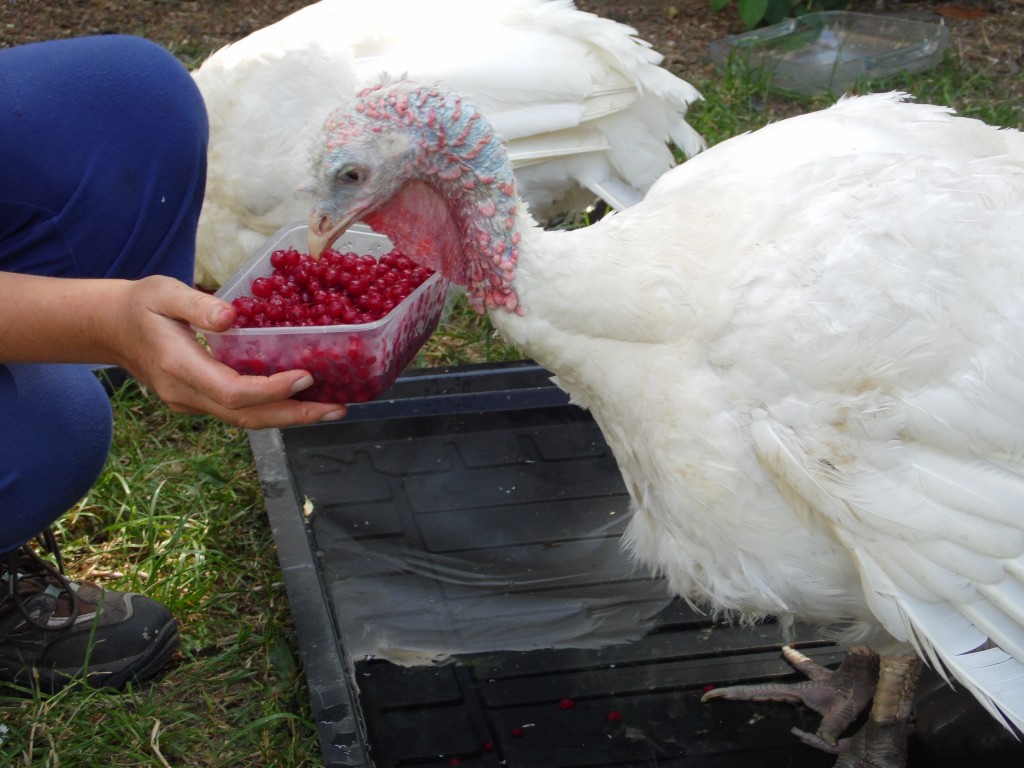 She died very peacefully, by euthanasia, surrounded by all who loved her: her constant friend and companion, Maeve, Sany, Ronnie, and the volunteers who had become her helpers and her friend: Vivienne and Jack.

We let Maeve spend all the time she wanted with Marian’s body as she explored her, putting her beak beside Marian’s face, gently pecking her to try to rouse her. She is inconsolable this morning: I can hear her yelps and pips in the sanctuary as I type. The other residents at Eden, including the other turkeys, will be her companions in this time of grief, but we cannot undo the pain of the loss and bewilderment that she must feel. Grief is so akin to fear. 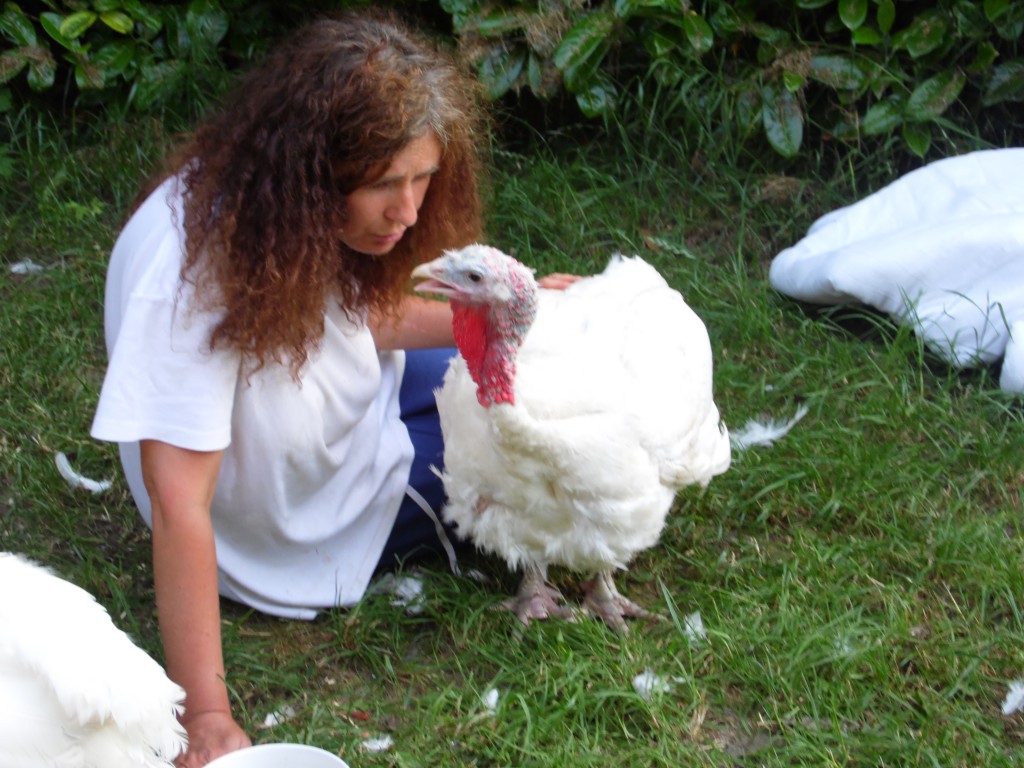 Eden is replete with sadness and grief at the moment. Marian’s is not the only pain and suffering, and her grave, unfortunately, is just one among several other fresh graves. 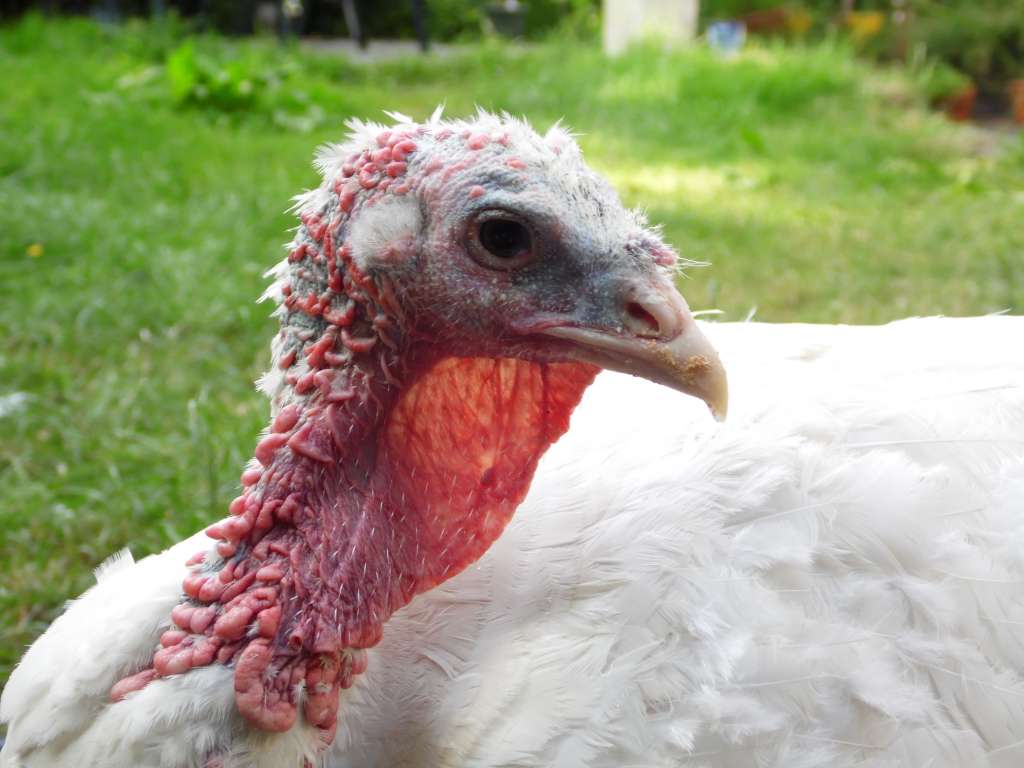 There is an undeniable incongruity between the momentary, gustatory pleasure of unnecessary animal flesh and the price of that pleasure to Marian: the intense, debilitating pain, her fear at her own helplessness, and the significance, enormity, and totality that was her life. She only had one life. Now it is gone. 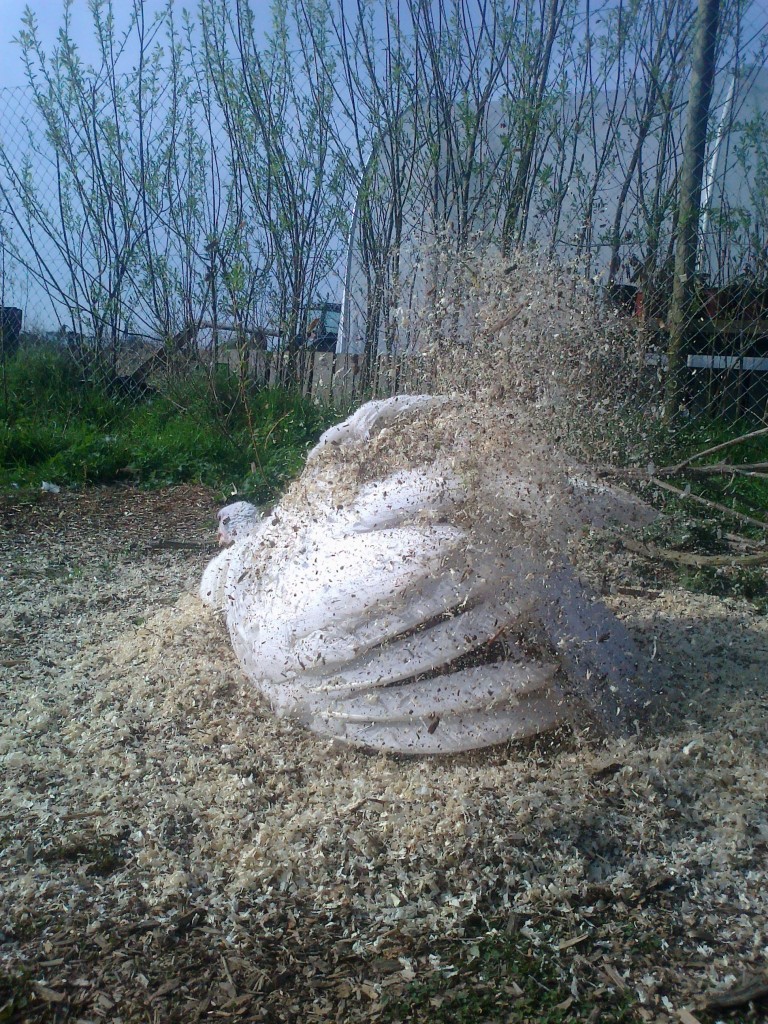 Like the other residents who have left before her, Marian was the best of teachers. Her origins bring back uncomfortable memories of going to collect the ‘christmas turkey’. It has been one of the most valuable experiences of my life for me to face my own darkness as I hugged Marian and felt the soft, warm, skin covering the heart that beat her life’s minutes, and recalled the cold, limp, lifeless skin on the breast of turkeys just like Marian who I put in the oven year after year for Christmas dinner. 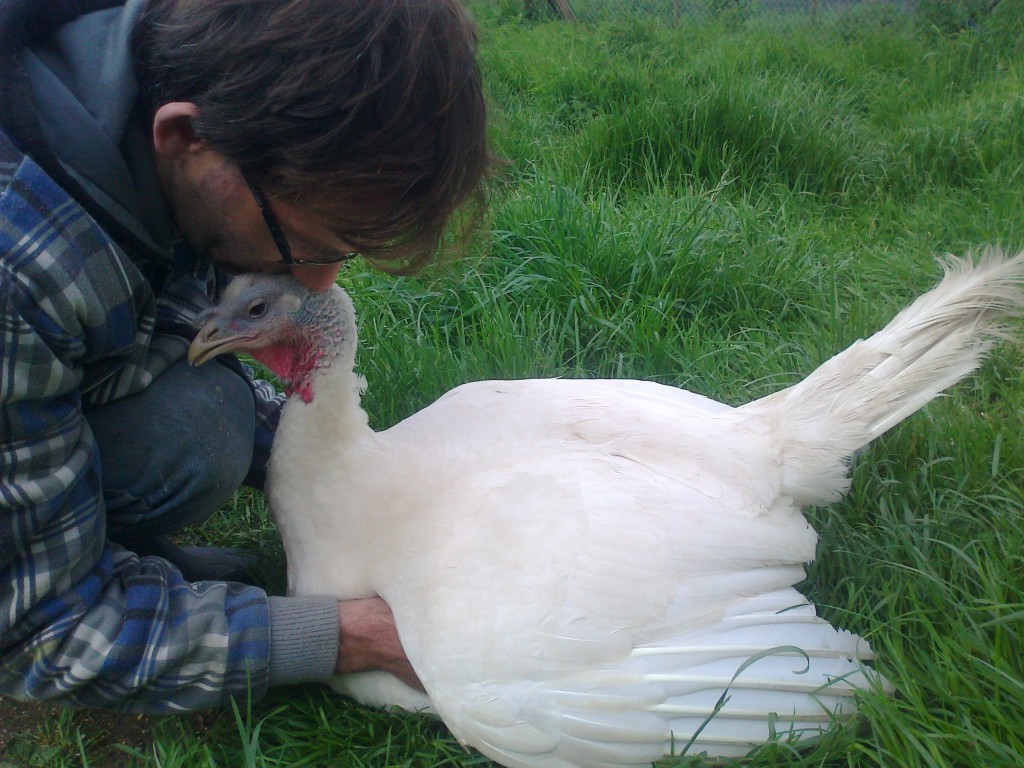 How life can change. I had never met a turkey prior to rescuing Marian, Maeve and Morgana. She arrived on a snowy, dark night with her companions since birth: Morgana and Maeve. She was named after my dear friend Marian, of Quaker Concern for Animals who has supported Eden from its inception. I quickly realized how privileged I was to be in the presence of such a magnificent beings. 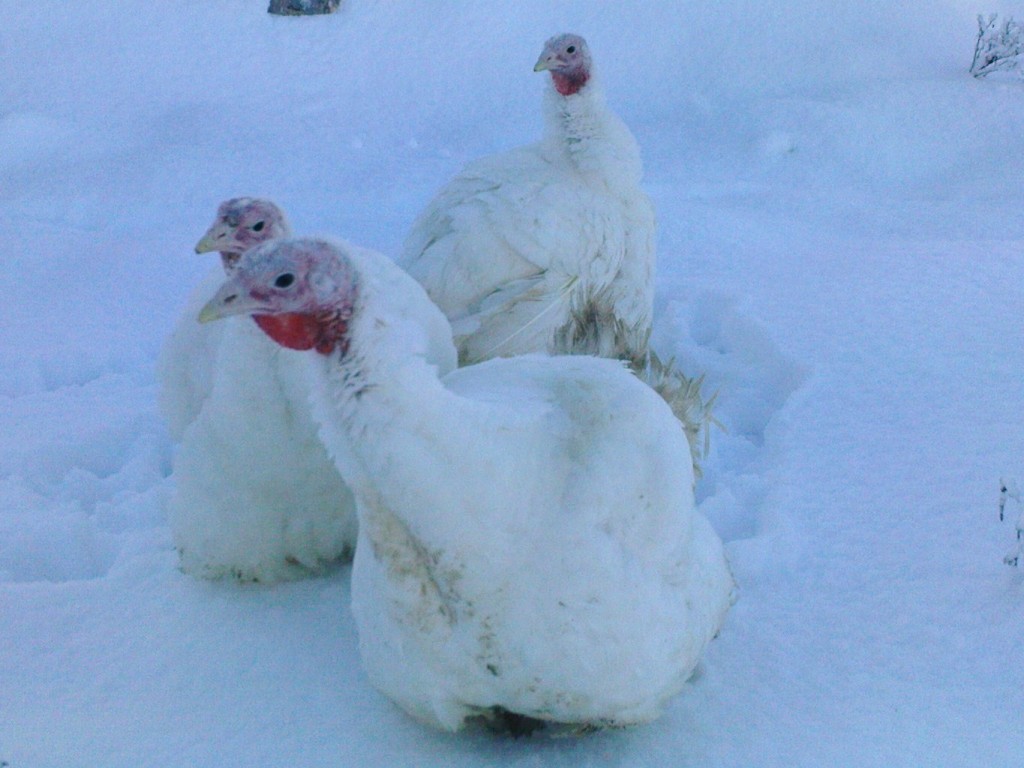 Marian was deeply affectionate, gentle, intelligent, and highly motivated to live an interesting, busy life despite the restrictions that our breeding of her placed on how she lived. So are the millions who die needlessly every year to be our food. The only difference is that we knew her, valued her, and loved her. We are here to tell you her story. The millions of others have no one to tell theirs. 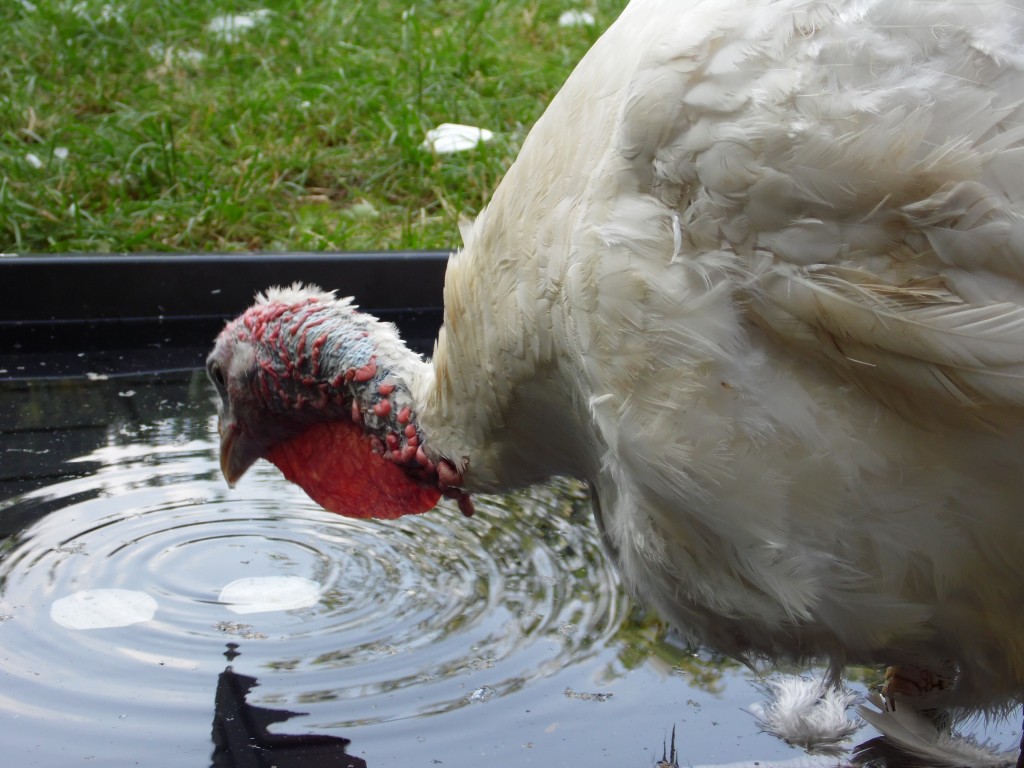