In an unprecedented action in Ireland ten sheep have been released from a slaughterhouse to Eden, a Vegan Farmed Animal Sanctuary. This is the first time that we know of, that animals in Ireland have left the slaughterhouse alive.

The sheep were spotted on a flooded island where they had waited for four days to be slaughtered. Apparently, there was a delay in killing them on arrival due to farmers’ protests at the slaughterhouse and they were placed in a holding facility which subsequently flooded. By the time the situation came to our attention, one had already drowned. Nine were rescued by kayak by a neighbouring farming couple. Sally, the tenth, was taken by speedboat, to the slaughterhouse where she was said to be in a weak state and awaited her death. 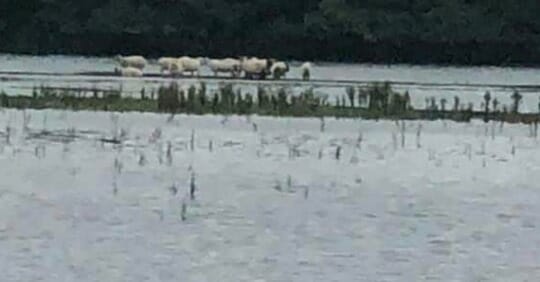 Once Eden became aware of their story we asked for public support for their case. There was also a lot of media interest in the case, but their interest was in a sensationalist presentation of how the sheep were treated prior to slaughter and not in their right to life. Many of you signed our petition, highlighted their case locally and on social media, were on standby with transport, donated to us, and supported us as we did the background work to prepare paddocks at Eden for their arrival and negotiate with the slaughterhouse and Department of Agriculture for their release. At 11.00 am on Tuesday 4th September 2019, all ten sheep were released to us including Sally.

The sheep were assessed on arrival at Eden by our vet. Some of them are young; others have mastitis scars indicating that they are mothers whose lambs have probably been taken from them for slaughter. Judging by the reaction of one sheep when she finally saw Sally again, they are good friends and we can already see the social and emotional bonds within this group. 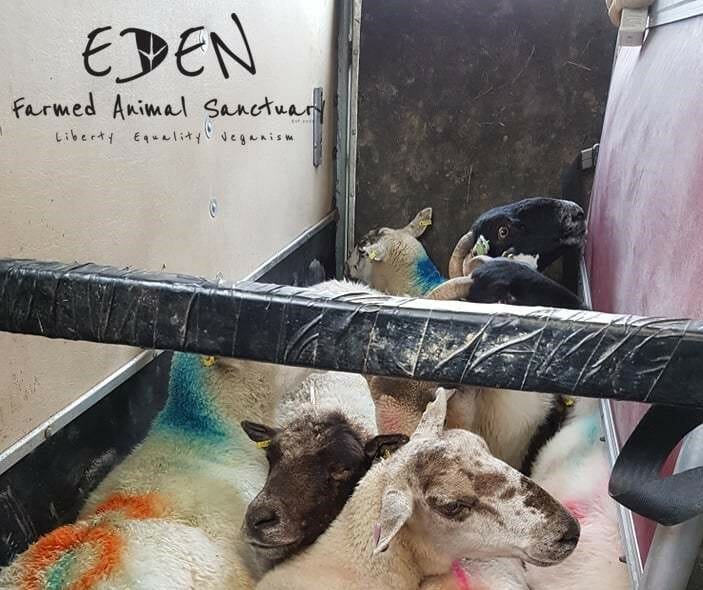 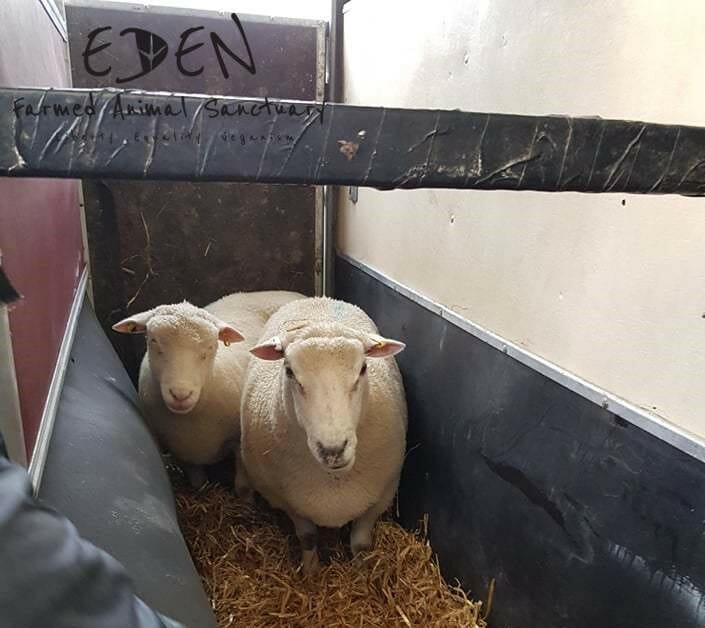 Some of them have severe conjunctivitis and others have symptoms of longstanding, untreated uveitis and corneal scarring. Anyone who has suffered these eye conditions can attest to the fact they they are very painful and debilitating. It makes it all the worse to think that they would have been taken to their deaths while they were in such pain that they couldn’t open their eyes, while the acuteness of their other senses would have perceived the extreme danger of the kill floor. Eye infections are common in sheep and are highly infectious so we estimate that in addition to the injustice of commodifying them to use as human resources, many sheep are in this vulnerable, painful state while they are being exploited and killed. In the case of these ten individuals, we can only imagine their terror and confusion as they waited in a strange place, watching the river rising around them, in pain and unable to lie down or rest. It is testament to their courage that they swam for their lives behind the kayak, guided by the couple who rescued them.

The Department of Agriculture stipulated that the sheep be subject to a blood test for scrapie, a transmissible spongiform encephalopathy (TSEs) of sheep and goats, and we have complied with this request.

They have now been treated with long lasting antibiotics and analgesics and treated for parasites.

They couldn’t wait to exit our trailer and begin to graze in their new home. 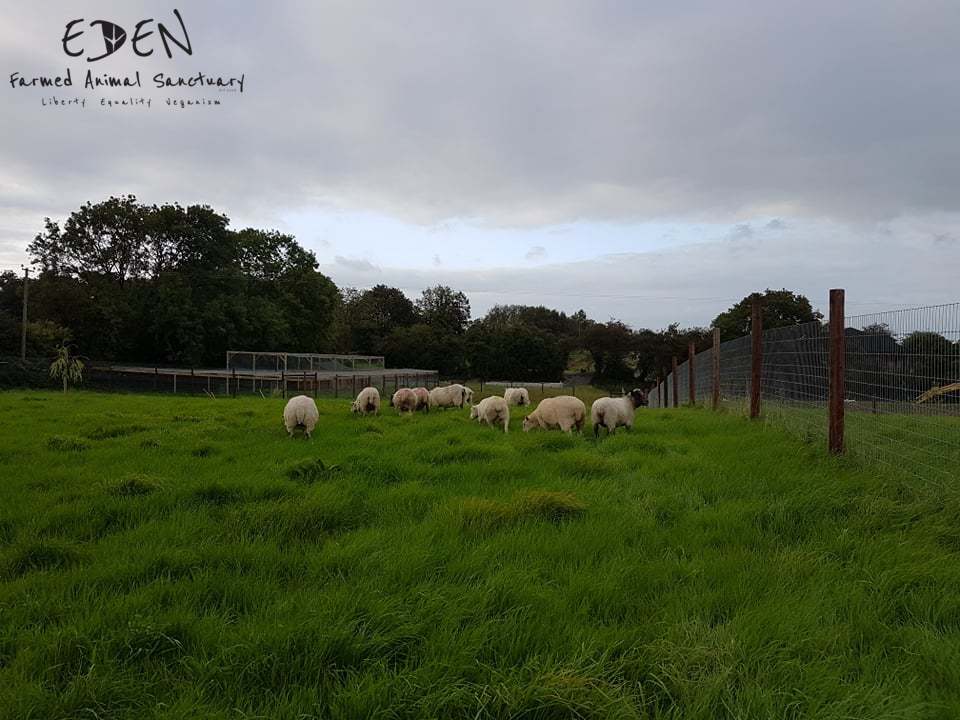 They arrive at Eden 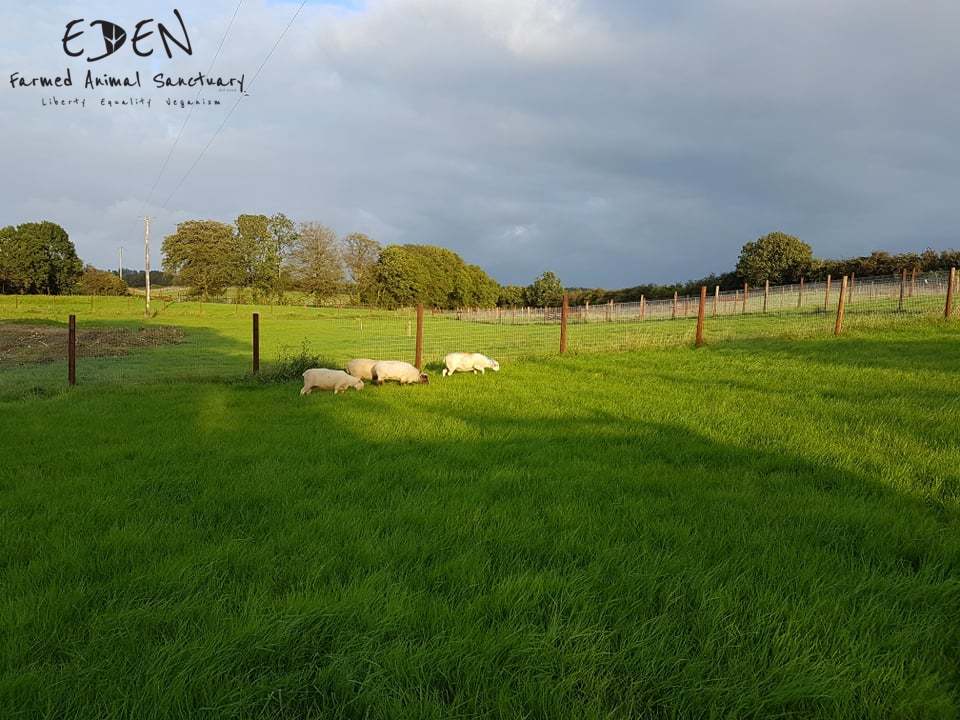 This morning, their first morning at Eden, they seem to have relaxed considerably and are resting in the sun, back-chewing and looking very content.

But they were in this predicament in the first place because they were bred to be slaughtered. It is understandable that people will point the finger at the slaughterhouse and call for justice but to do so misses the point because there can never be justice as long as people demand the slaughter of defenceless animals when they hand over their money for animal products to eat, wear and use. Those who are not vegan are not in a position to accuse the slaughterhouse of injustice when they are creating a demand for them to kill on their behalf by paying for animal products.

Eden Farmed Animal Sanctuary is grateful to all the people who played a role in helping to secure the release of the sheep and transport them to safety at Eden, and to people who have donated to us to enable us to care for them for the rest of their lives.

We have been negotiating the release of animals from human use and slaughter for over eleven years. This is the first time we have been involved in a release that was public. The ten sheep will stay at Eden for the rest of their lives. As soon as they have recovered from their infection and been in quarantine for six weeks, they will join our other sheep. Some of our sheep are between twelve and fifteen years old. During their years with us we will provide them with a safe and secure home, maintain the fences and gates in their paddocks, and maintain their houses. We will feed them in winter and maintain the tractors and other farm machinery we use to bring supplies to them. We will keep them supplied with fresh clean water, clean their houses every day, keep their hoofs trimmed, treat them prophylactically to prevent parasites, nurse them when they are ill and pay for them to have veterinary care at the earliest possible signs of illness. We will also pay our animal caregiver and maintenance staff in their vital roles as their daily carers. It is our privilege to live with them, call them our friends, laugh with them, comfort them when they are ill and be with them as they die. We cannot provide this excellence of care without money. So please support our work financially if you can. If everyone donated a small amount, collectively you can make such a difference to their lives. We depend on you. They depend on you.