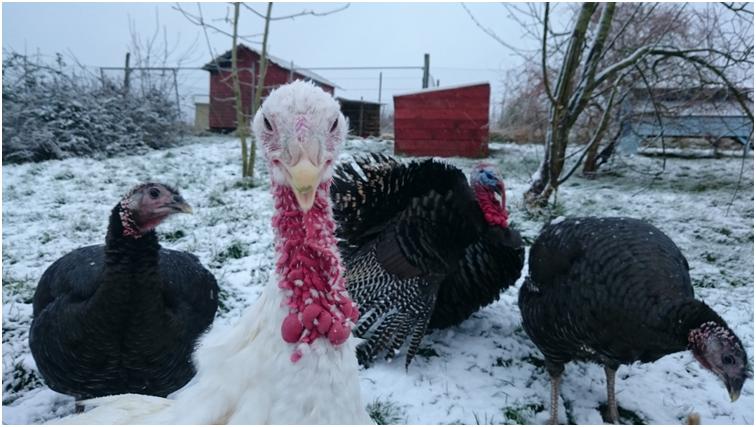 As I write Eden is white with snow.

We are lucky to have dedicated, hard working volunteers, like John and Charlotte, who came to help care for the residents and learn about veganism. They help break the ice on the resident’s water and keep them warm and fed and their houses and beds clean. They plan to be vegan when they leave Eden. Volunteers have made a tremendous difference to life at Eden and, in turn, Eden provides a wonderful opportunity for people to immerse themselves in an environment with the best teachers of veganism: the residents themselves. 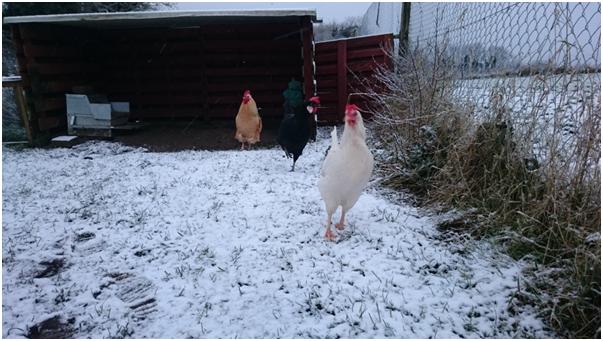 The sensible chickens stay close to their shelters, purpose build for this type of weather. They are large enough to hold their water and feeders and still leave room for hanging out and dust bathing. The turkeys and sheep stay outdoors for most of the day. Even Cara, who we thought was terminally ill, is holding her own, plodding around in the snow, still able to find new shoots to eat. 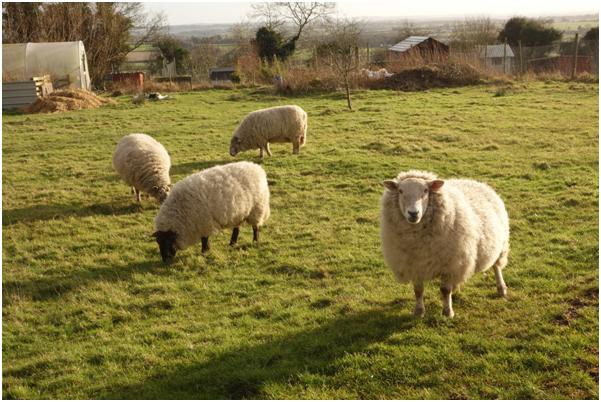 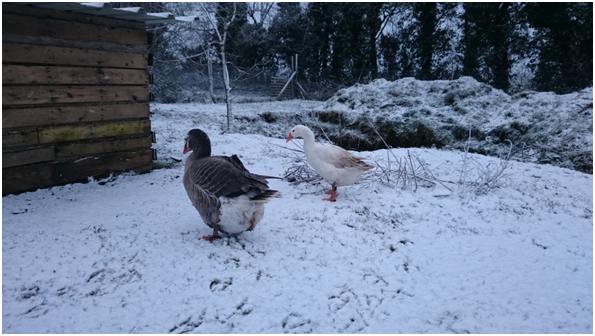 The geese and ducks don’t usually mind the cold. They stay outside and swim regardless of temperatures unless their ponds have frozen over. But during this cold spell, even the geese went indoors to avoid the freezing gales. 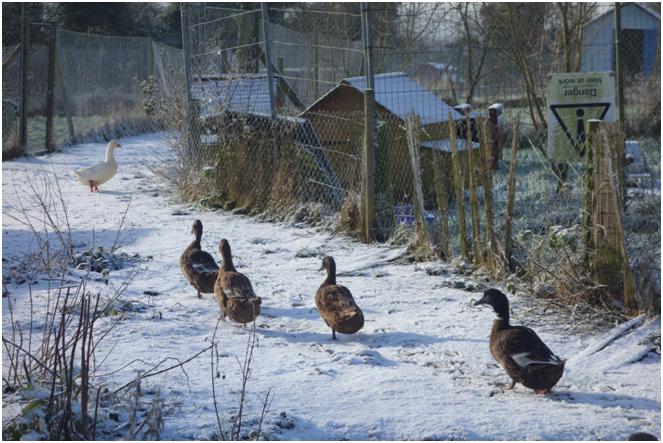 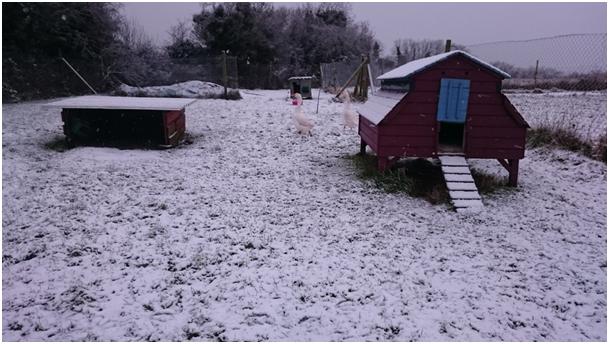 Our new geese residents are barely visible in this photo, camouflaged against the snowy ground. But if you were here you would hear their powerful screeching and honking. They hiss a lot: they don’t like humans very much. Who can blame them? 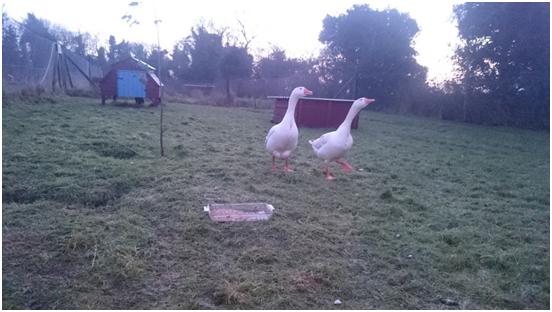 Ireland has a very damp climate and snow can be unpleasant, in contrast to the dry snow of other European countries (although it is not always so). When it is so cold that I cannot go outdoors without covering my face, I wonder how the fragile bodies of some of the sanctuary residents withstand the low temperatures.

Which brings me to the point of this newsletter: Alice 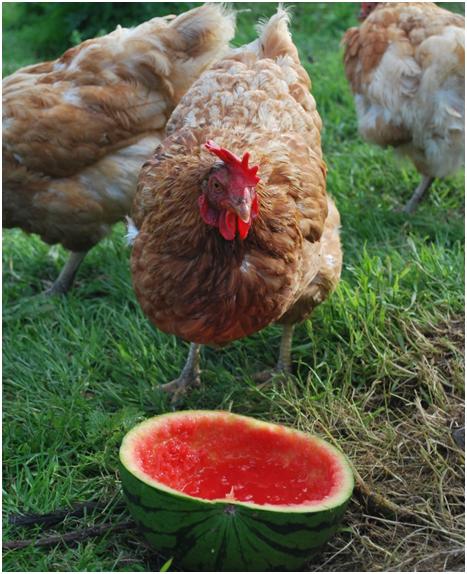 Figure 5 Alice, the summer after her liberation in 2012

In January 2012 the EU passed legislation banning barren battery cages in order to introduce a new type of battery cage. Thousands of chickens faced slaughter, prior to the usual slaughter age of 18 months, as farmers transitioned to the new system. Eden provided a home to sixteen of those hens. Alice was one of them. She is the only surviving member of her group.

Last summer Alice, along with her partner Fitz, was among the most joyful couples at Eden. Alice is a very inquisitive, social girl. She liked to come into her house watching and chatting with whoever was doing the morning chores. Then she would hop into her nestbox and put her face right in front of our face and utter the plaintive wail that is her way of asking humans to crack open her egg. Hens at sanctuaries love to eat their own eggs. 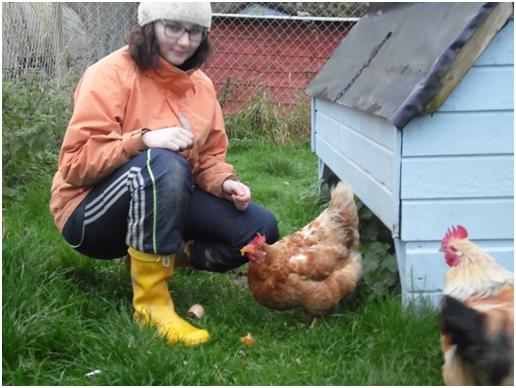 Figure 6 Clara enjoying her egg with Fitz & our friend Clara

Visitors and volunteers delighted in witnessing Alice jump high off the ground in anticipation of a treat such as some of the raspberries from the garden, or later, some of the blackberries growing in the garden that is her home, that replicates, to the best of our ability, the jungle of South East Asia that is the natural home for her species. 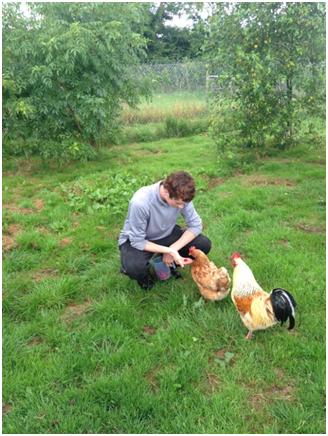 I used to hear Fitz vocalising urgently as I collected berries, as if to say ‘Don’t forget Alice’.

I would scatter the berries in front of them and he would speak rapidly and excitedly, picking the berries up in his mouth and dropping them in front of her. Like many cockerels Fitz would not eat many or any of these berries, generously allowing Alice to have them.

As I watched their interaction I was always mindful of the history that Alice survived. It was my greatest wish that she would still be with us to mark the third anniversary of her liberation on 16th January this year.

A few weeks ago, just as the days began to get longer and a little brighter, after the winter Solstice, I noticed that Alice was not venturing out of her house during the day. The extra minutes of daylight often result in a dramatic increase in male sexual energy, so I imagined that her companion, Fitz, might have been too enthusiastic for her. I took her indoors for a few days and Fitz went to live with Grainne and Connie who were alone following the recent deaths of their friends Harry and Deirdre (a lot of sanctuary life is about helping the residents to make the best decisions for themselves about new relationships following the deaths of their companions).

Alice didn’t appear to be ill so when the weather became a little milder, I let her go outdoors again. But she continued to hide in her house, even on the mildest days. Alice now lives indoors full time.

I have witnessed this in the past. It is as if, in their old age, (old in terms of the average lifespan of most hens rescued from the egg industry) they can’t bear the cold. When this happens I let them live out their lives in one of the rooms of the human residence at Eden that is warm. One of Alice’s comrades, Melissa, sunbathed at this fire, her wings outstretched to catch its warmth just as she would do outdoors in the sun. She did this right up to the hour of her death.

This makes me think about the origins of these hens that we have artificially bred to live in Ireland, far from the jungle of South East Asia, their true home. They evolved to live in that warm climate and they suffer when we force them to adapt to environments that are not optimal for them. 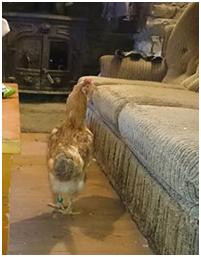 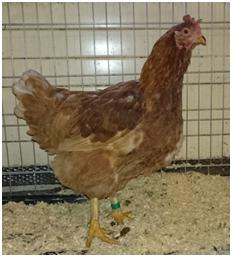 For the moment Alice has a decent quality of life. She eats and drinks very enthusiastically, and she explores every nook and cranny of her new indoor environment. She has the company of Helga, another hen who is being nursed indoors, and Margaret who lives indoors all winter because she is blind. She also has the company of Razzle in the evenings. Razzle makes life so rich for all of us with his great character and amazing vocalisations which you can hear in this video. She lives amicably with the sanctuary cats who also love lounging indoors in the heat. Many of them need it as they recover from cat flu which arrived with newly rescued Dylan in November.

Despite the benign environment indoors at Eden, Alice she is a shadow of her former self. My hope for her is that she will live to experience another summer. 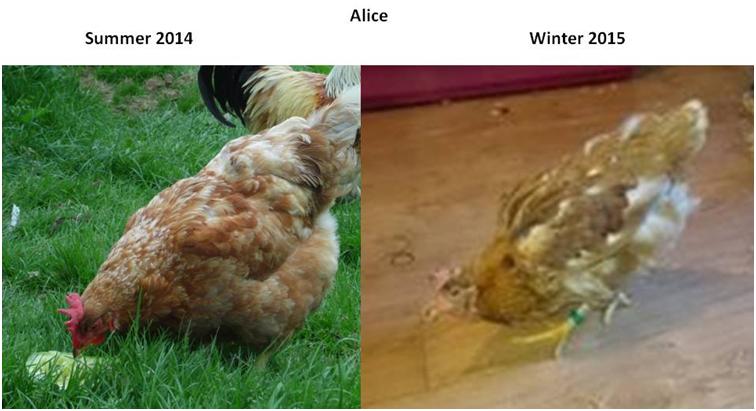 Alice’s health and quality of life are greatly compromised before she even reaches five years of age. This is a direct result of being bred to lay eggs for human use, something she would not do if she was free of human interference and had bodily integrity. If you are not already vegan please think about Alice, and the billions of hens just like her who do not even have a home like Eden where some attempt can be made to ease their discomfort and make life easier for them.

We do our best for the rescued residents who live at Eden. But sanctuaries cannot overcome the effects of human exploitation on the individual animals we use. Only veganism can do that.