Eden was founded in 2008 to be a home for individual survivors of animal agriculture who are rescued because they are being unjustly, albeit legally, used as objects or resources for profit, and face premature death by slaughter. In 2005, two of those individual animals were an hours old lamb whose mother was dying, and an old sheep who had just lost her lambs. In Hindu mythology Yoshoda is the foster mother of Krishna, so when someone suggested those names we knew they were appropriate and beautiful for these two animal people who had found their home with us.

I remember the day I arranged with the farmer to take the soon to be orphaned lamb off his hands. As a throwaway he mentioned that he had a ‘strange old sheep’ who he intended slaughtering the previous year but when she ran with the other sheep who were being scanned for pregnancy, he discovered that she was carrying twins and, ‘milking’ the last cent from her tired old body, he decided not to slaughter her. He said I could have her if I wanted her. I did not need to be asked twice! 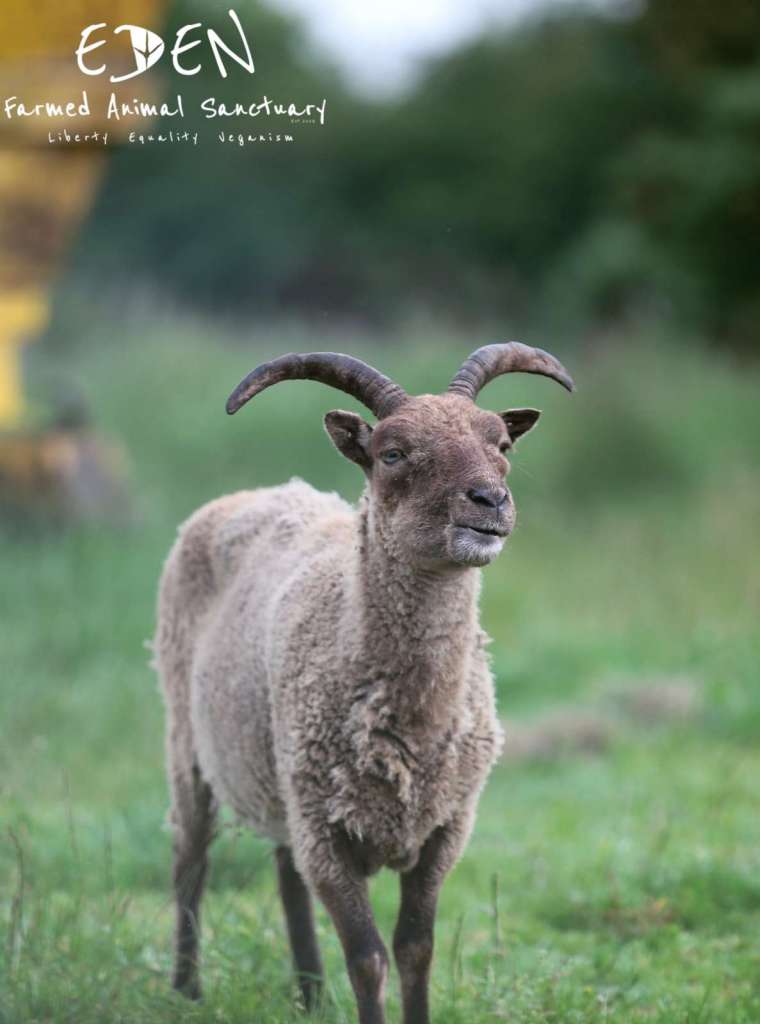 This gentle, quiet little soul whose voice was so soft you’d hardly hear her, who needed respect, privacy, peace, and the gentlest of hands, had been used, all her life as an object or resource, a means to earning a living. Her unique personality and beautiful nature were invisible to the eyes of someone whose only interest in her was the profit she conferred as a breeding sheep by having lambs every year before being slaughtered. Goodness knows the torment she may have gone through, giving birth to lambs who were too large for her, trying to hold her own alongside sheep who were twice her size, and being jostled and bruised by the rough handling that is standard practice on farms.

When she came home to us, we had never seen a sheep like her and we were awestruck by the ethereal quality of this little sick, malnourished mother, who looked more like a deer than a sheep. We knew, even then, before we knew her, that someone very special had come to live with us. 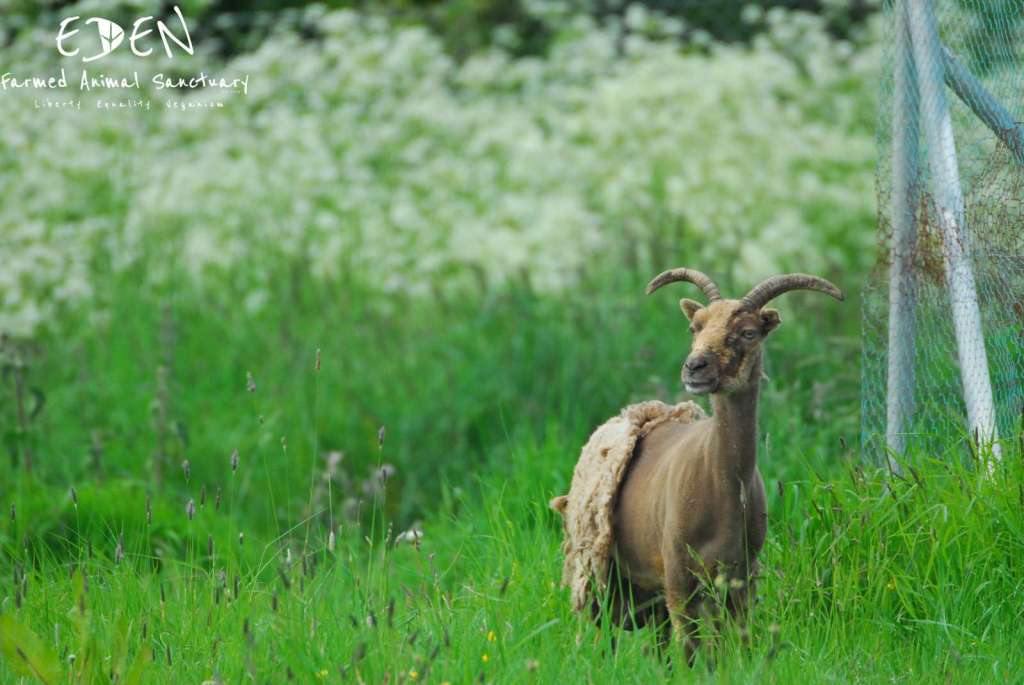 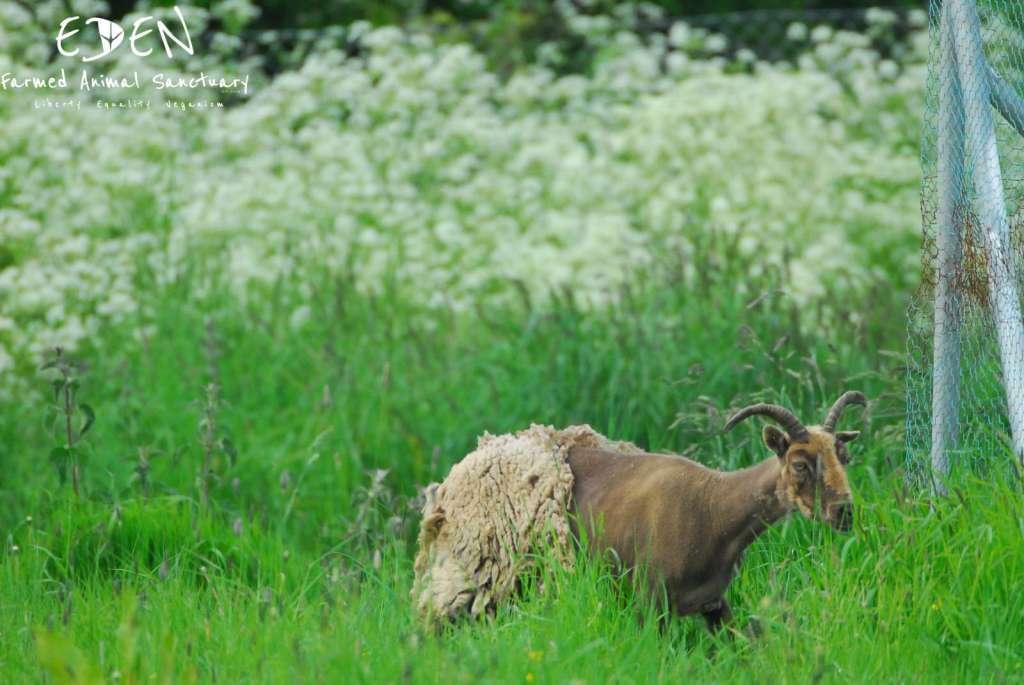 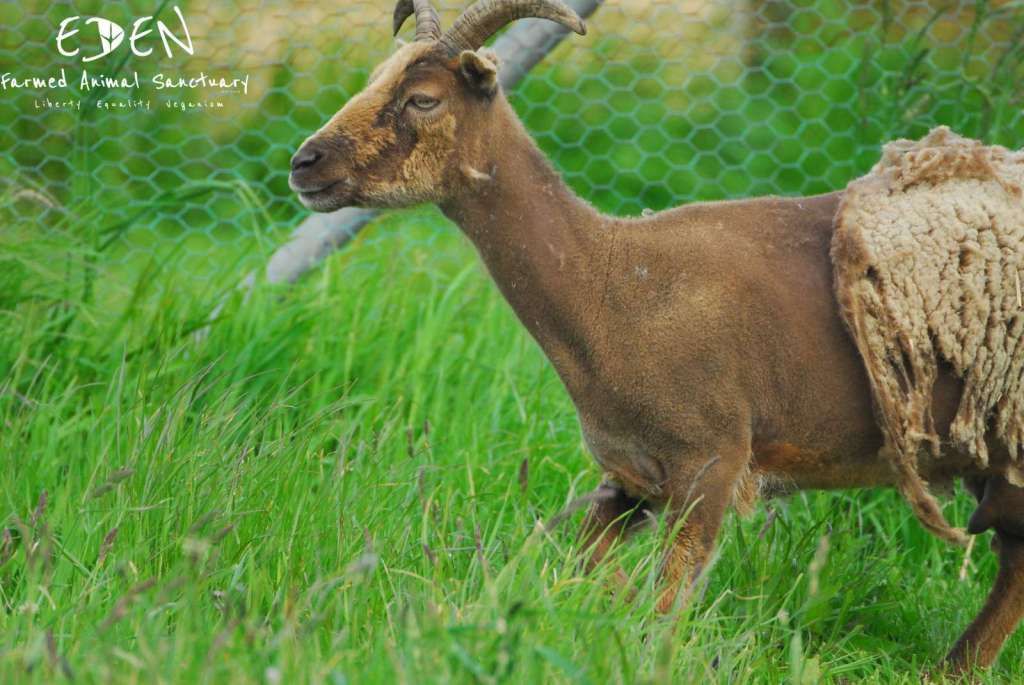 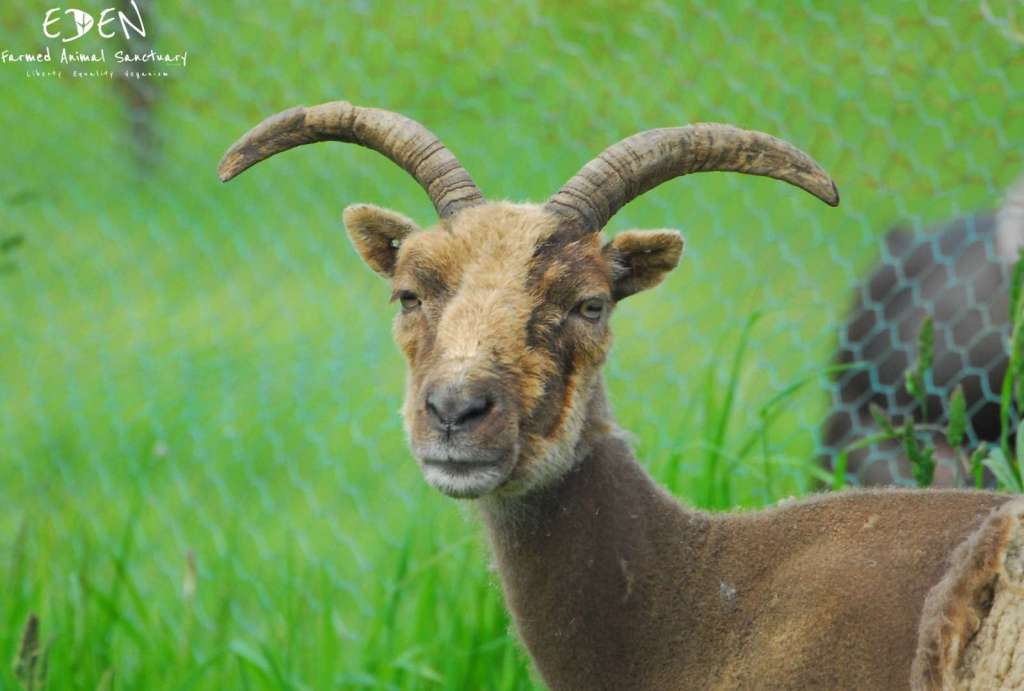 Photos of Yoshoda when she arrived at Eden (Clara Mozes)

She was like a deer in nature too. She was elusive, flighty, nervous, and hesitant. She could outrun anyone, and she was extremely shy. Whenever we had to tend to the sheep for annual medication, foot care etc, just as everyone headed into the shed, Yoshoda would suddenly decide she wasn’t going in, and she would run so fast that no one had a chance of stopping her. Then her mothering instinct would overcome her, and she would return to make sure the rest of the sheep were OK, and easily enter the shed on her own terms. 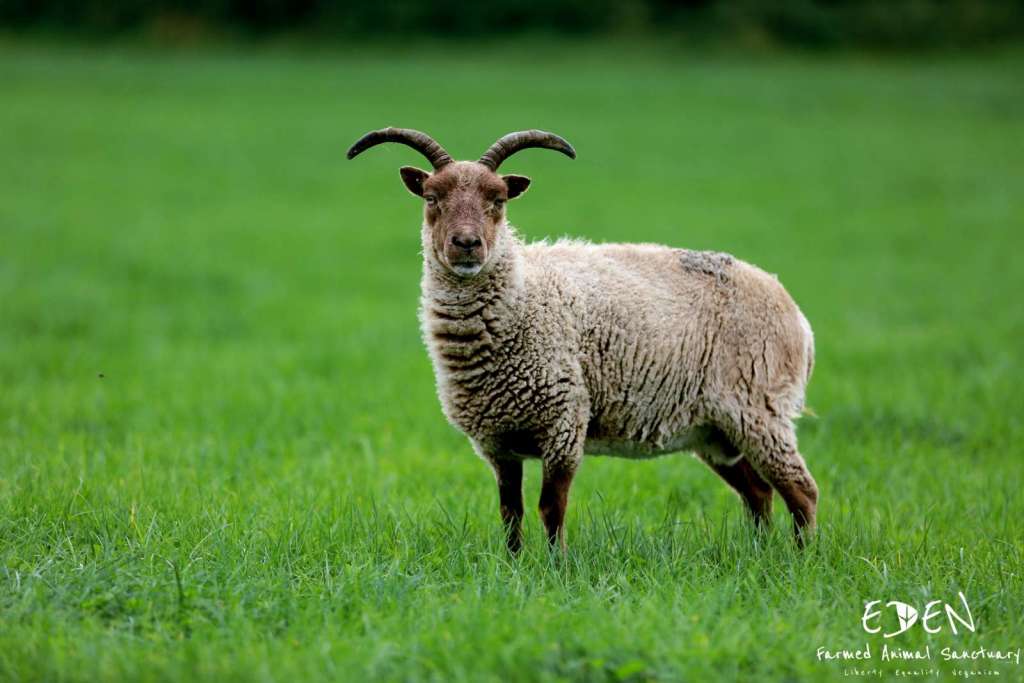 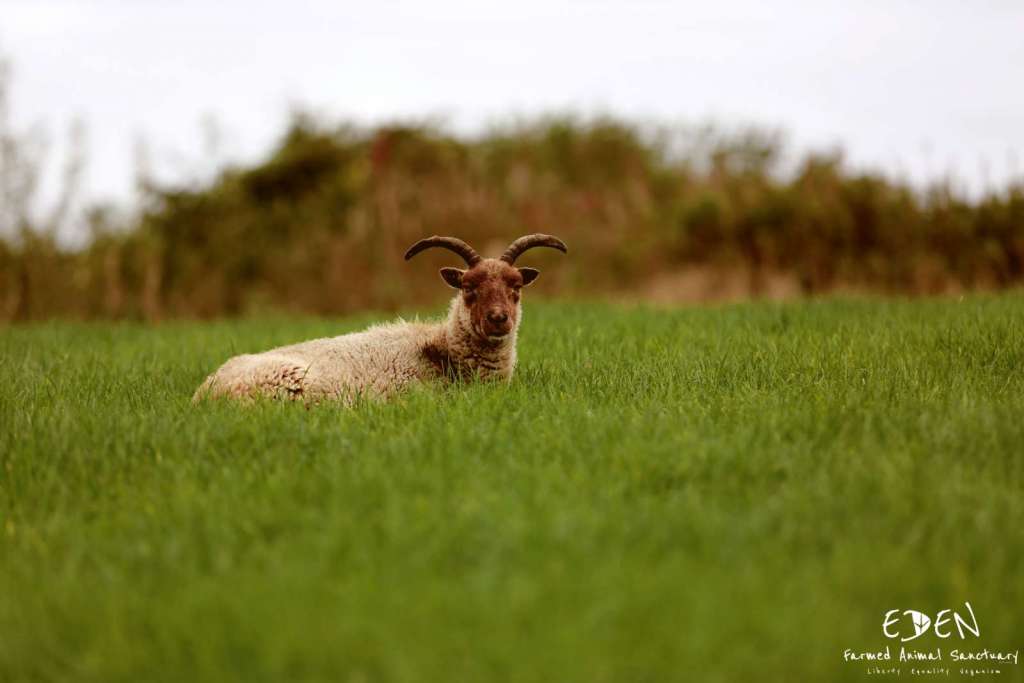 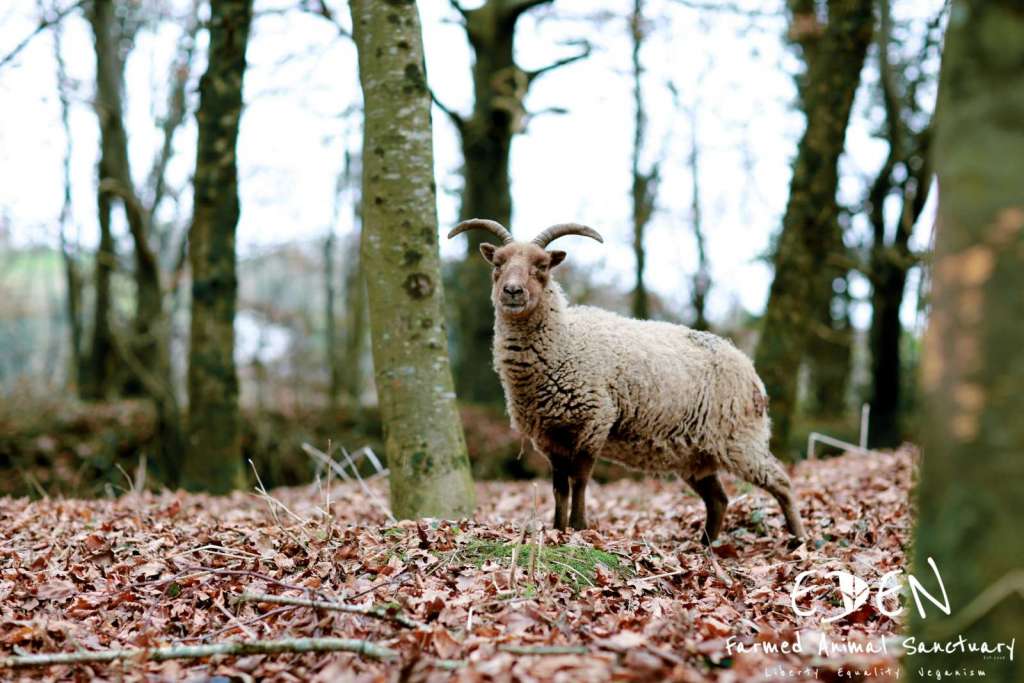 Over the years, we realised that her name could not have been more appropriate. She proved herself to be a very capable minder of the other sheep. Like her namesake, she was always watching out for the other animals. She was always at the gate to welcome a new member of our animal family at Eden, and she used to hang around until she knew they had settled comfortably. If someone on the sanctuary was ill, Yoshoda would be drawn to them, and spend her day grazing close by until they were well again. Her mothering instinct was so strong; she must have been such a beautiful mother to all the babies who were taken from her to be slaughtered for their flesh over the long years of her life on the farm. 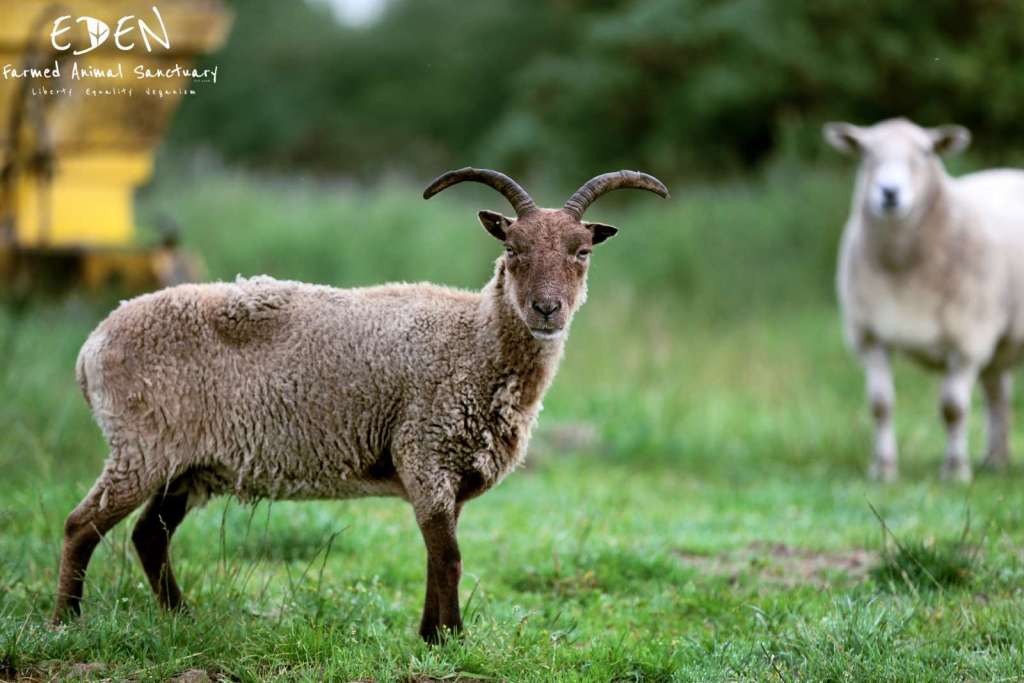 Last year Yoshoda lost almost all her sight. She had such beautiful eyes and we were sad for her that her world had darkened. But she had sufficient sight to be able to graze, interact with the others, and get to the shelter of her house when she needed to. We moved her to our highest priority special care field so that she could have extra food, attention, and easy access to shelter. This summer, at eighteen years of age, we moved her even closer to us, into our back garden which had a plentiful supply of the long green grass that she loved. For the last few months she was weak and prone to falling on her side, so she needed constant care. She became like any old person: when she lay down for a rest, she did not have the strength in her body to get up again. But once she got a helping hand, she was well able to carry on as normal, grazing and wandering around the garden. We used to check her every twenty minutes during the day, and every two hours throughout the night. As a result, she allowed us to get close to her, something that had not happened in the past. She must have associated human proximity with fear and pain because for all the years she was with us, she always chose to stand up and walk away from us when we approached. Even when we were coming with a treat, it was her preference for us to leave it on the ground and walk away before she would eat. But in old age, when she depended so much on us, she had no option but to learn to trust. We are honoured and glad that she was able to enjoy the love we gave her for these last few months; that she trusted us enough to call us when she wanted something; to nudge us to give her a treat; and to relax as we caressed her thin little body to tell her how much we adored her. 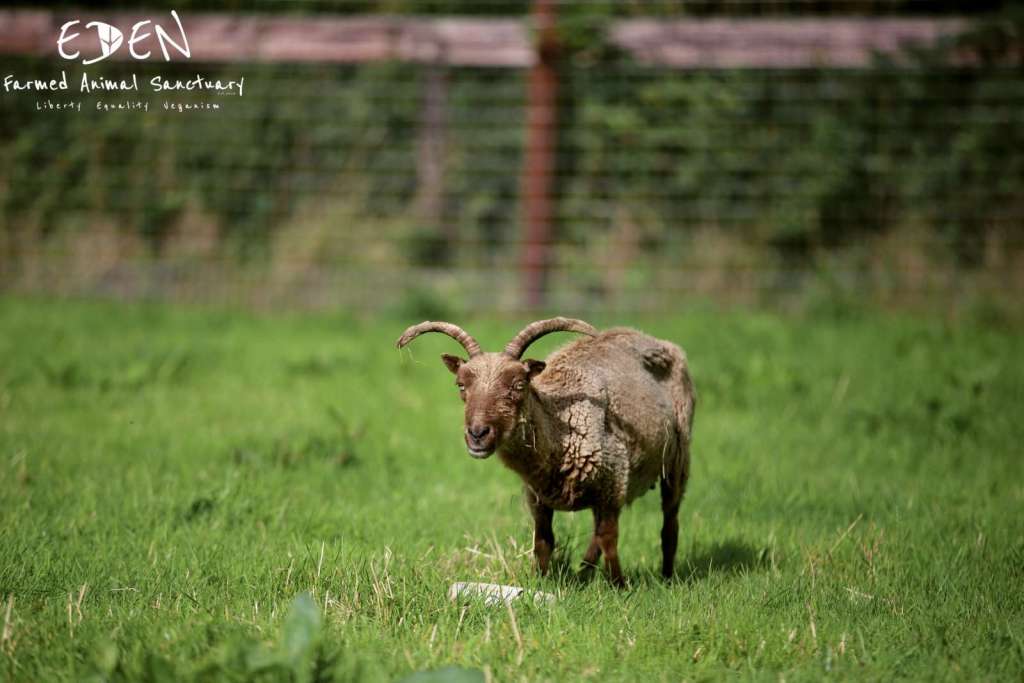 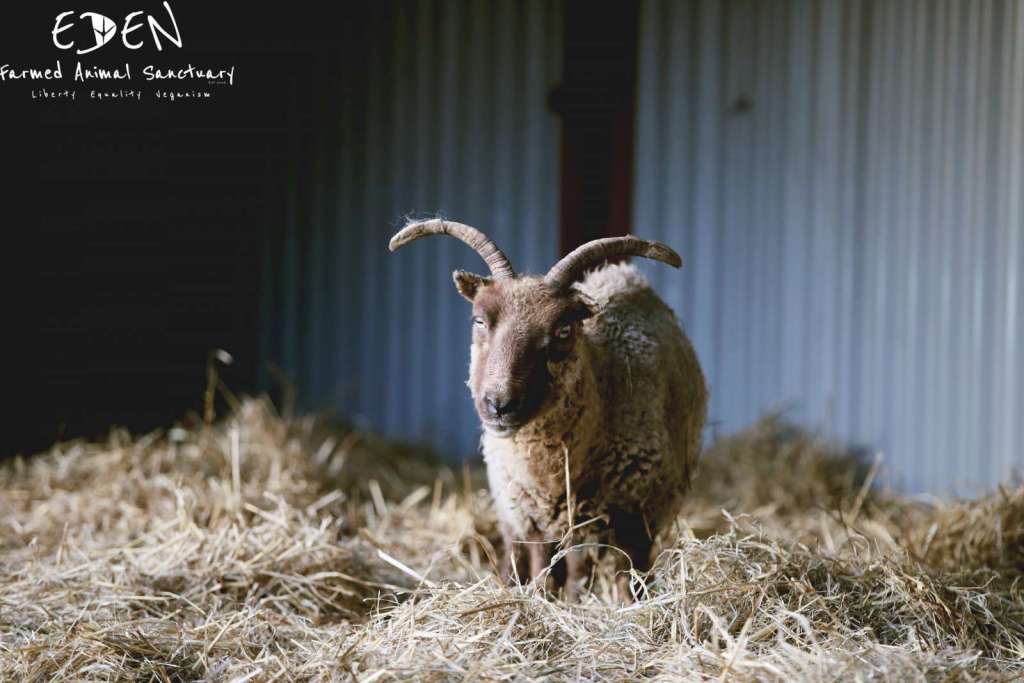 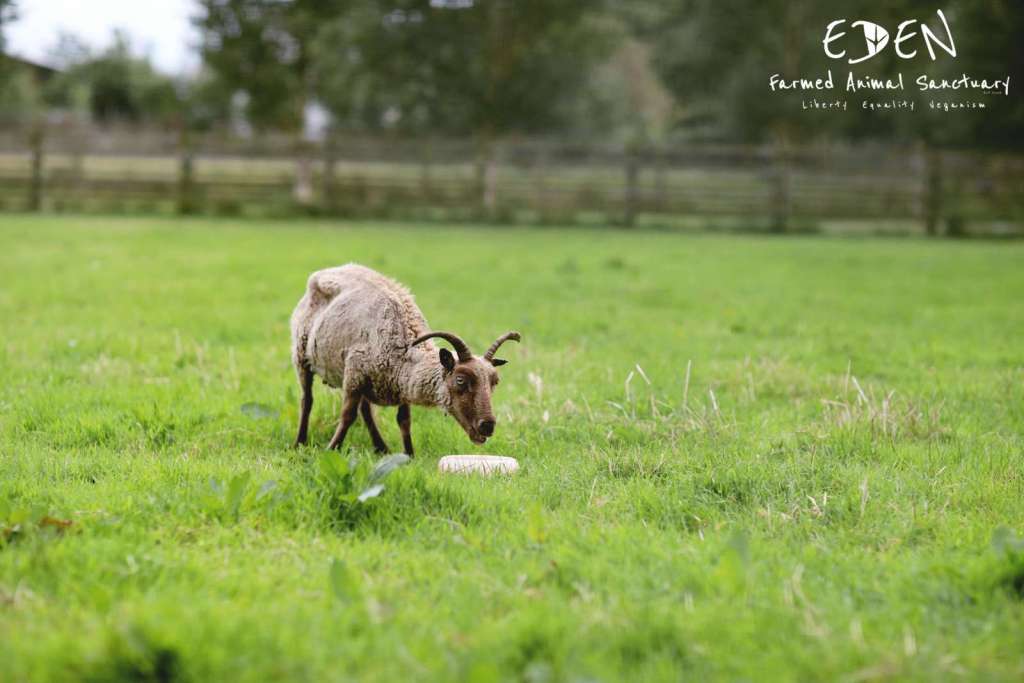 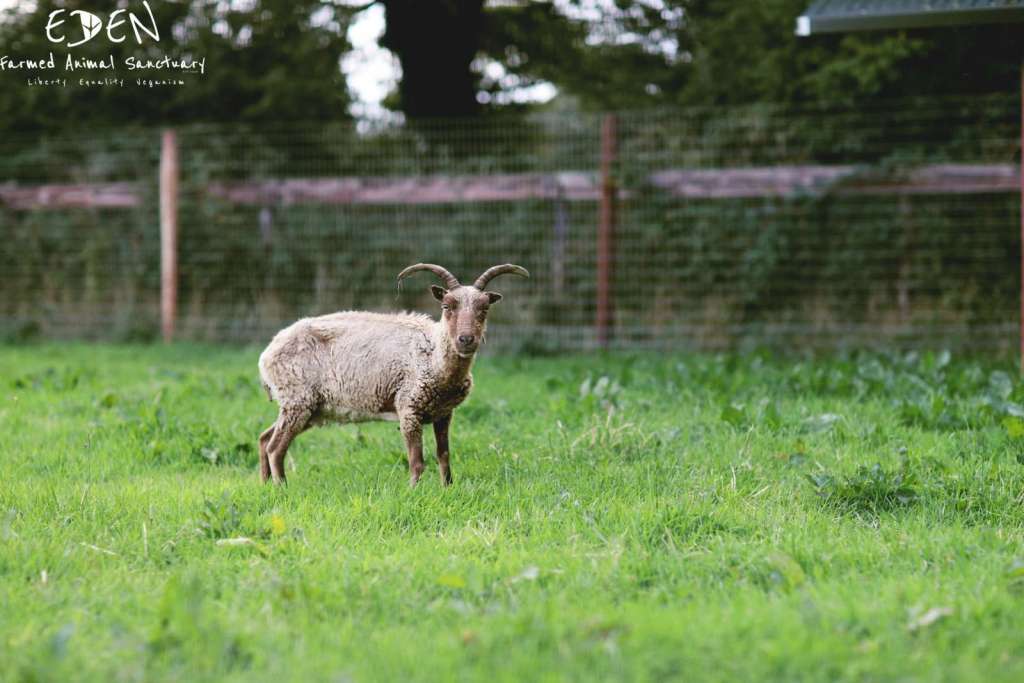 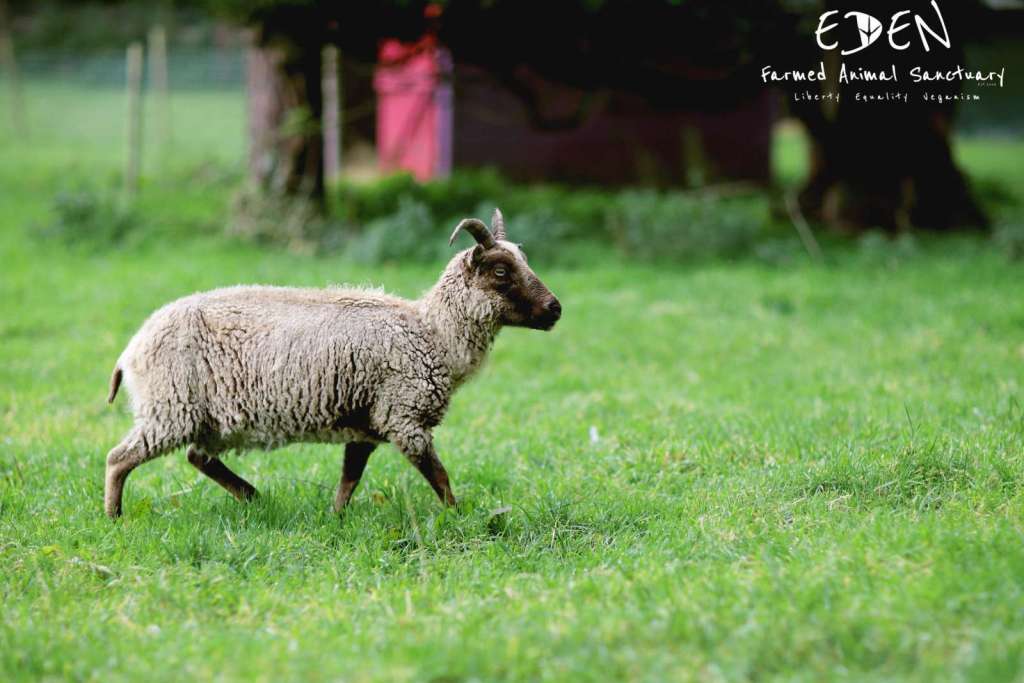 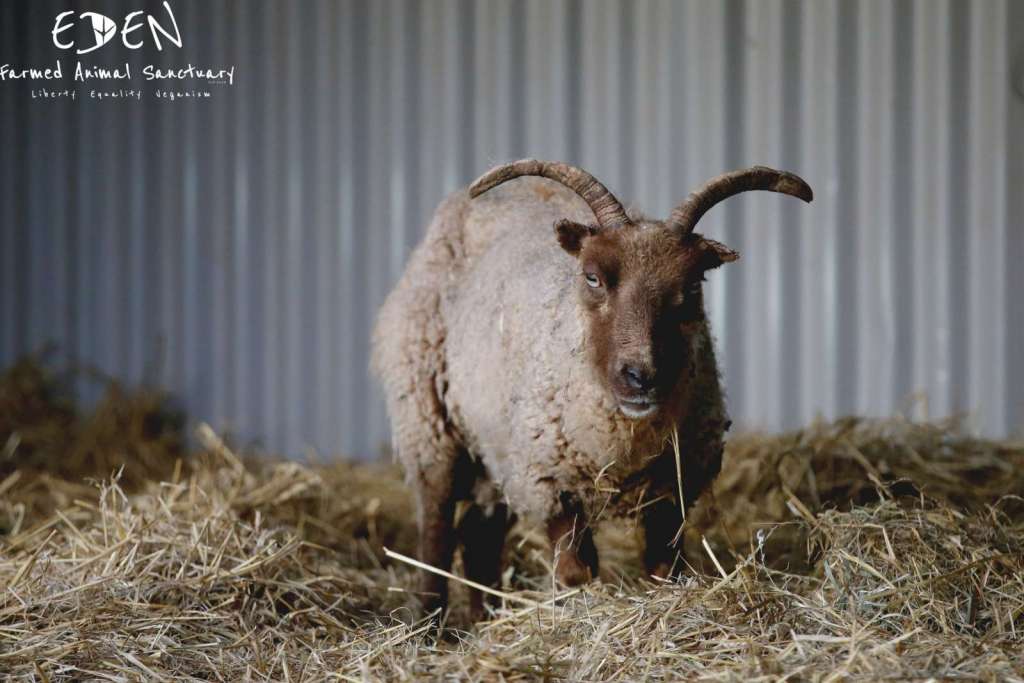 The first weekend of July was cold, windy, and very wet. Yoshoda spent most of her time in her house, standing at the door to grab the rays of sun in between showers. She ate very well, finishing bowls of freshly cut grass, ivy, grain, and her favourite treat of cabbage leaves. She even ventured out on Sunday night to graze around the garden during a brief dry spell. On 6th July she was weak and even though she still enjoyed her favourite cabbage leaves, I noticed around midday how slowly she was eating. Not long afterwards she lay down under the tree and I knew that I would never lift her up again. I lay beside her for the last hour of her life so that she was comforted and loved as she left this world.

Too few people are aware of the feelings of other animals. They fail to recognise that they are someone’s mother, sister, friend, or child. They refuse to recognise their right not to be owned, used, or killed. They do not even see them as individuals; to most people they are just species who exist for our use. Yoshoda was a victim of the very darkest side of human nature that views these majestic, complex, angelic, sensitive animals as pieces of flesh. Look at her photos, read about who she was, and know that she was not a piece of flesh, she was not an object to be farmed and used. She was someone; someone incredibly special who we were fortunate to have known and loved. We will always cherish the time we had with her and miss from our lives. 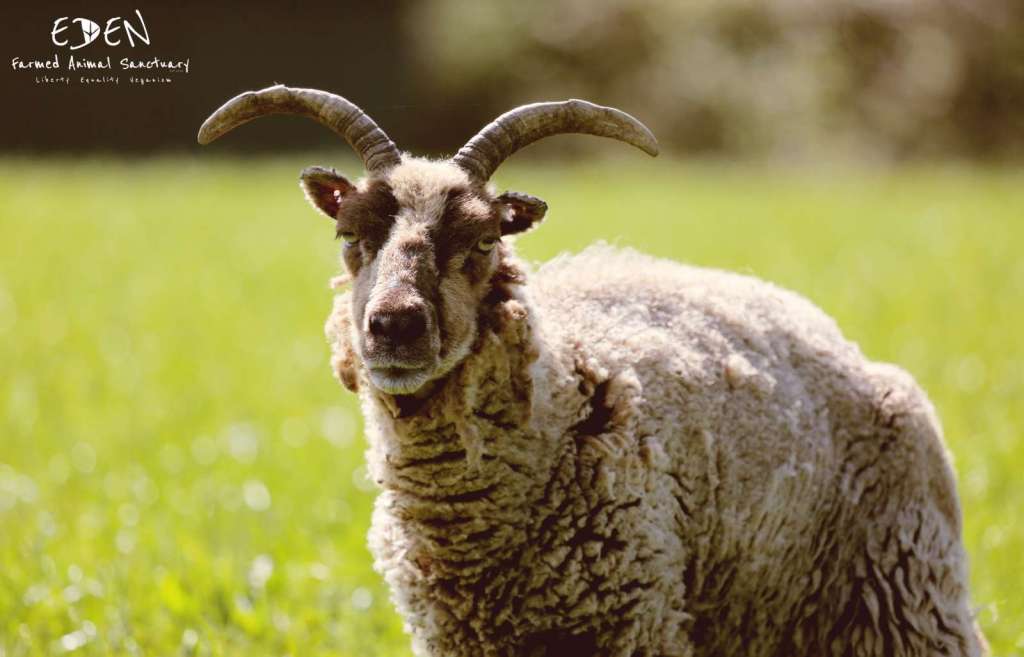