‘She was for the

[meat] factory but when I was scanning the ewes she ran into the scanner with the rest of them and she was marked as with twins. I wouldn’t kill her when she was in lamb.’ Farmer of Yoshoda and Krishna. 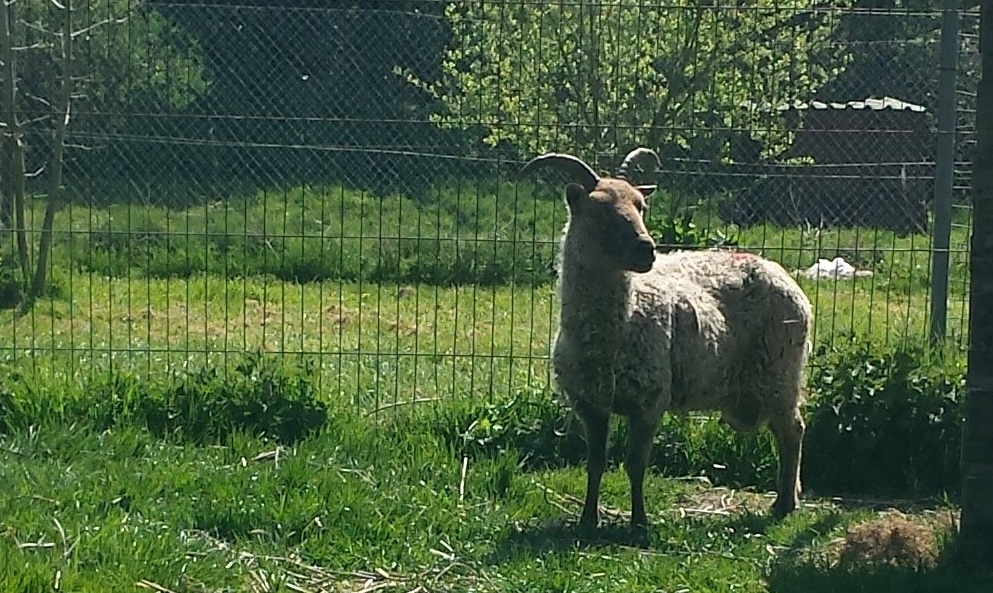 At this time of year many sheep lose their lambs and many newly born lambs lose their mothers.  Farmers often try to get bereaved mothers to foster orphaned lambs. Others bottle feed the orphaned lambs, often to be sold as ‘pets’.  Having formed this bond of friendship, paternity, and intimacy with humans, they, like every other sheep, are duly sent to the slaughterhouse to face their brutal deaths.  It is one of the worst examples of betrayal in the animal agricultural industry. 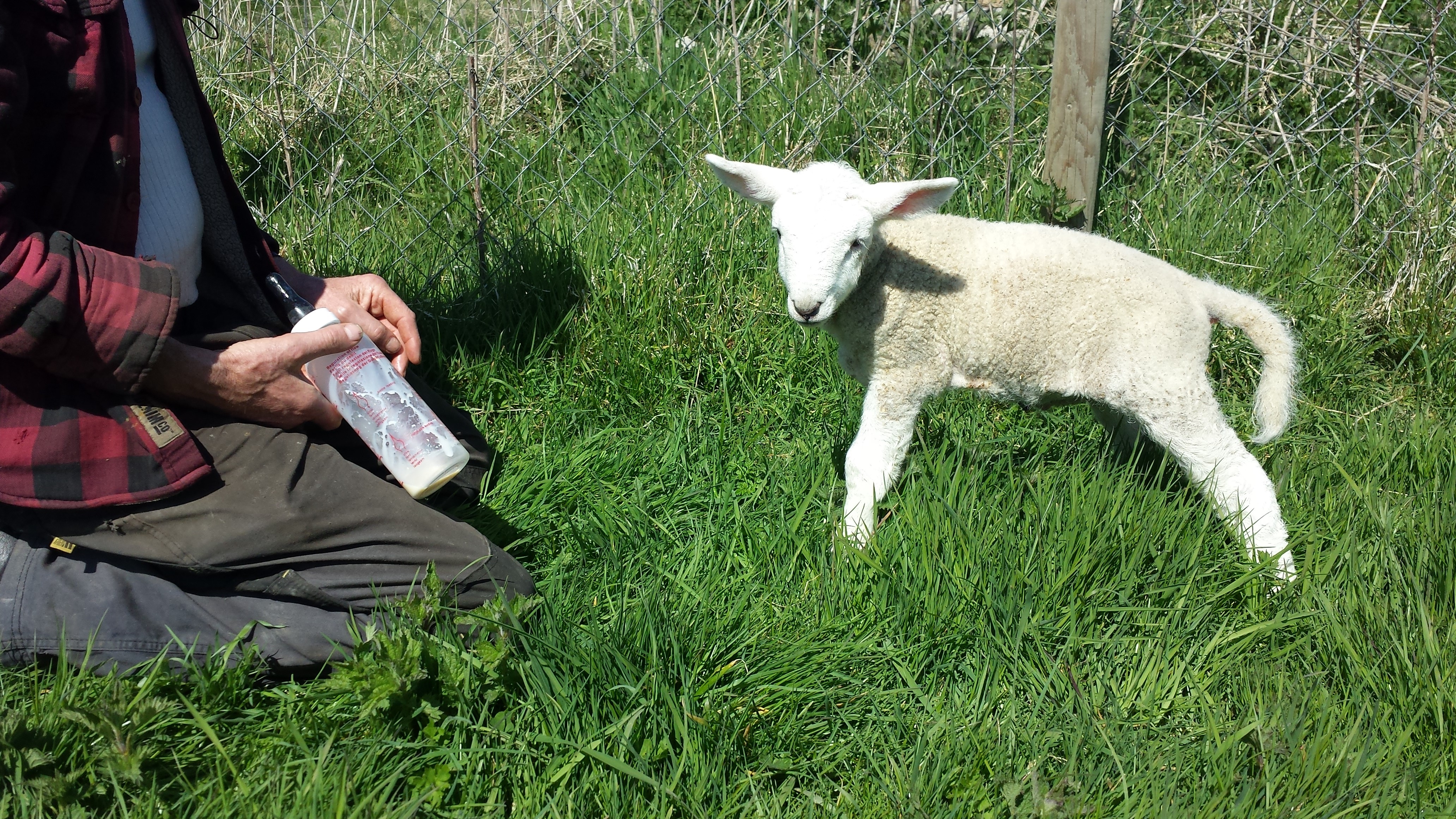 For some busy farmers bottle feeding is impossible given the workload of farming.  They give the lambs away.  Krishna is one of those lambs.  His twin sibling died and his mother became fatally ill with twin lamb disease. He arrived at Eden still wet from birth with the exquisite scent of the newly born.  He is a big lamb with the capacity to thrive in a sanctuary setting where the tragic cycle of birth and death for human use will end.  Without his mother and with only a frightened, undernourished sheep as companion, his hungry little mouth initially struggled in bewilderment to find nourishment.  He has now learned to suckle a bottle and is tentatively gaining strength and showing the first signs of playfulness.

He arrived with Yoshoda (foster mother of Krishna).  She had just lost her twin lambs. Yoshoda is a very small sheep by nature, but she is also skeletal and extremely nervous. No doubt she is traumatised and grief stricken. She is producing very little milk and although she wants to feed and foster Krishna it seems to be too painful for her.  She has been unable to eat and requires bottle feeding. In fact, on examination she has no teeth indicating that she is a good age. Who knows her full history.  She narrowly escaped slaughter earlier this year by joining the sheep on the farm where she lived as they were scanned for pregnancy.  Yoshoda was found to be pregnant with twin lambs and spared slaughter.  Her extreme thinness, small build and wild nature rendered her of little profitable value to animal agriculture and so she was willingly given to Eden. 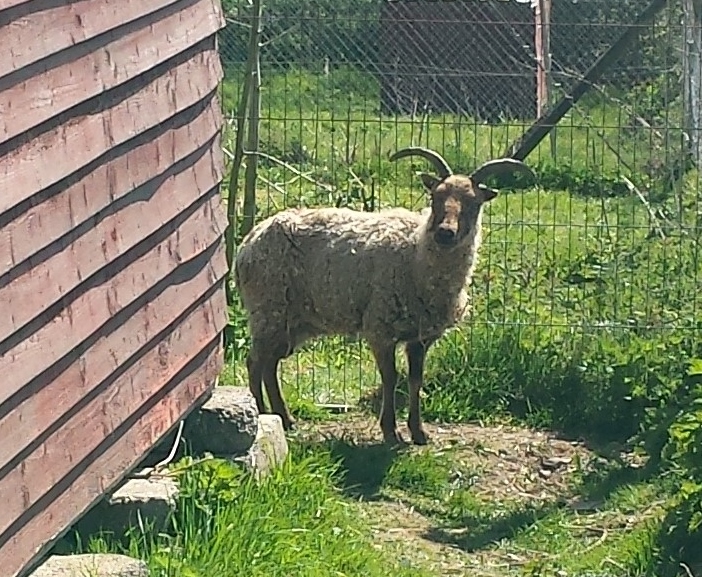 She has been given antibiotics for a slight udder infection along with pain relief, multivitamins, and a mixture of warm molasses and beet pulp, milk replacer and a substance to stimulate her rumination.  She is beginning to show the first signs of recovery.  When we approach her to care for her she attempts to escape and knowing the impossibility of escape she sinks into the ground in pitiful submission, her strong spirit broken by human use. It is our fervent hope that she will regain that spirit and her physical strength, and allow us to express the tremendous love and respect  for her that is already in our hearts and that she will eventually make friends with the other sheep residents at Eden.

As so, as Spring gets warmer and more summer like, life at Eden is tinged with a mixture of hope and sorrow: hope for the lives of our new residents, yet tinged with sadness as we bear witness to the loss of precious lives.

It has been very difficult to reconcile the memories of the personality and personhood of residents like Geraldine, Flo, Verona, Petra, Miriam and our brief visitor, Realtin, with their deaths.  They were all nursed intensively throughout the winter and spring months but they did not survive.

We are left with beautiful memories of their lives and characters:  Verona hopping onto the shoulder of whoever cleaned her house or arching her body as near as possible to her neighbour Razzle’s enclosure in the hope of getting some of his food; Geraldine running straight from her bed to swim in the icy pond on winter mornings; Miriam running excitedly across her sanctuary room to greet us as we approached her gate; and that Petra pressing her little body to the ground in anticipation of a hug.  Realtin spent just a few days at Eden, having been given to us when she was accidentally locked into a kitchen and attacked by dogs where she lived.

Each of them died years before the natural lifespan of a duck or hen from injury or illness directly attributable to human use.   What matters is not how we treat them, but that we use them at all. 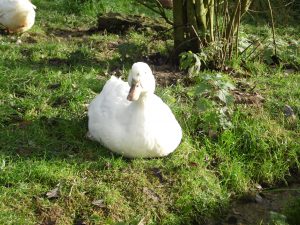 Geraldine at the pond after a swim

Geraldine did not manage to recover from her joint injuries. These injuries are very common in ducks who are bred for their eggs, and also bred to be very heavy for the meat industry. 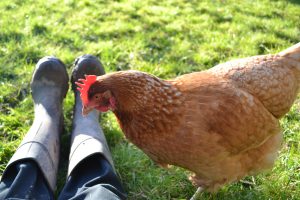 Verona lived indoors with us for weeks before her death. For a while it looked as if
she would follow in Alice’s footsteps and manage to enjoy one more summer.
Sadly, that was not to be and her life has now ended. Of all the recent deaths
Verona’s is the most difficult to face. Everyone who met her recognised her
individuality and strength of character. Volunteers and visitors all loved her
exceptionally curious and friendly nature and the excited, trusting way in
which she broke right through the species barrier, never imagining that any
human had less than her best wishes and her every desire at heart. Bless her
innocence. 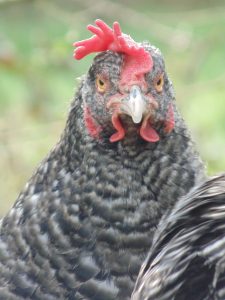 Readers will recall that Miriam was being treated for symptoms of ovarian cancer. She stayed with us for as long as her quality of life was good and she was able to live outdoors until the day before her death. She was euthanized and died peacefully.  It is important to remember that it is not just factory farming or cages that cause suffering to other animals. Miriam was never confined to a cage; she was bred into this life for her appearance and for her eggs.  That was enough to kill her.  It is because of people like Miriam that Eden promotes vegan abolitionism. 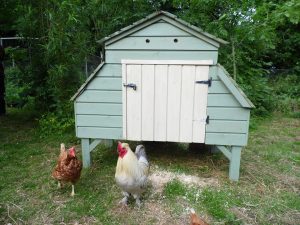 Alex with Flo shortly after her arrival at Eden

Flo put up a tremendous battle to stay alive with symptoms indicative of Marek’s disease, a form of cancer that is highly prevalent in egg laying hens. She, along with all four hens who arrived at Eden from another sanctuary, had been originally been used by the egg industry, trapped in enriched battery cages. They came to Eden in the late summer of 2012.  Three years later all their lives have ended. Flo struggled with Marek’s disease for several weeks. Although she could not eat or drink by herself, or take more than a few steps, unusually she tolerated syringe feeding and was in very good form until the last 24 hours of her life. She suddenly became weak  and was euthanized by our vet.  Euthanasia is not always easy for hens but Flo died very peacefully. Her tolerance of weeks of intensive nursing and her desire to stay alive is testament to the deep longing of every hen bred into the egg industry to overcome our violation of them and live long, autonomous lives like their wild counterparts. 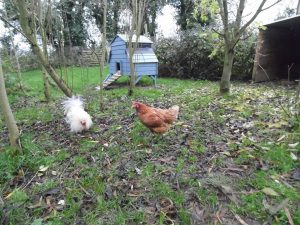 Alex and Flo before she became ill

Matilda’s Promise will give an Introduction to Veganism Workshop at 2.30-4.30 pm on 10th May next.  The workshop will be held at Yoga With Roisin Studio, 19 Trimgate St, Navan (near St Mary’s church, between the Craft shop and Kidstuff).  Please contact Roisin on 0851203431 or Eden via telephone (0872325832) or email edenanimalsanctuary@yahoo.ie for information and bookings.

The Vegetarian Society of Ireland is holding a Vegan Bake Sale at The Outhouse, Dublin, on Saturday 25th April next, between 2.00 and 4.30. Funds raised will be shared with Eden.  This is a wonderful opportunity to share information on the work of Eden and Matilda’s Promise for vegan abolitionism with a wider audience.  Feel free to drop in and chat to people who know the residents and work of Eden and pick up some of our literature.  Don’t forget to invite your non-vegan friends.

Eden is currently recruiting volunteers for summer work.  Life at Eden gets very busy in summer as we need help with cutting grass on a weekly basis, making hay, erecting fences and houses, repairing and painting existing houses etc.  Volunteering at Eden is a wonderful way for vegan activists to connect with the residents and contribute to the quality of their lives.  For people who are not vegan this is a wonderful (and very successful) way of immersing oneself in a vegan lifestyle. Please check out our vacancies page for more information.